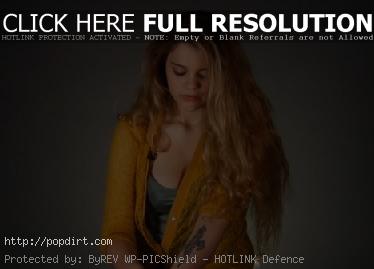 MTV News caught up with Sky Ferreira recently, asking the 18-year-old about her tattoos.

“I got a teardrop because this was right before Lil Wayne was going to jail,” Sky said about one of her finger tats. “Even though that also means I killed somebody, but I didn’t kill anybody. Sorry.”

Pointing at the next tattoo, she said, “The star on the back of my head I got when I was fourteen, near my house, like just randomly again. Not much thought into that.”

As for a royal inking on the other side, she said, “I used to draw this crown on everything and it used to be my logo and I used to get people to spraypaint it everywhere, so this crown is on the back of my head also.”

Regarding the larger tattoo she has on her arm, Sky said, “I went to this guy Josh, and he did this huge tattoo on me. I was about to back out of it. I was like oh, I can’t do it. Then he gave me this whole story about how he had to do someone before and they couldn’t make up their mind for two days and how annoying it was, and I was like fine, I’ll do it. He’s like okay, you can back out, but just let me do one little line. It was not one little line, and I thought I was going to die at first. The first ten minutes was so painful, and then it felt like nothing. Then I got it done in an hour. I didn’t even stop. I was like just do it, because if I keep stopping, it’s gonna hurt more. It’s kinda corny to say this, but this (tattoo) was right when I got to New York and a few months before my 18th birthday, I was living on my own now. I guess when I look back on it that’s what I think of, when I finally became an actual adult.”

One thought on “Sky Ferreira Like Talks About Her Tattoos”