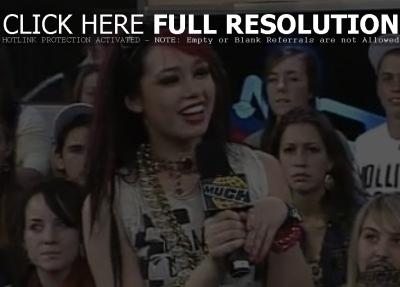 Skye Sweetnam dropped by ‘MuchOnDemand’ in Toronto on October 30th to chat with VJ Leah Miller about her new album ‘Sound Soldier’, her love of the color pink, kissing girls, working with Rancid’s Tim Armstrong and performing with the veteran punk band, and her new video.

Asked about the sexy song titles on the album, she said, “I’m kind of personifying music on this record. Music is kind of a sound soldier, this whole thing where there’s an audio extremes kind of idea. Music really is my boyfriend and I refer to music as my best friend, my fiance, what I do, everything.”

On working with Tim, Skye said, “He’s awesome. Totally inspiration. Really, really smart guy. Knows the business really, really well and we just became great friends. We wrote a bunch of songs together. We hung out at video shoots. I actually got to play with Rancid, which was pretty dope. Sang with Rancid on stage.”