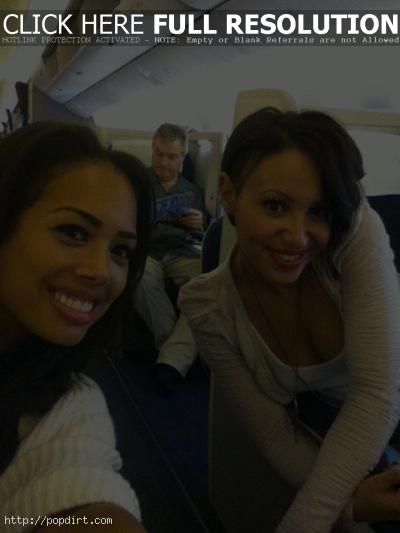 Amelle Berrabah checked in with her Twitter followers (@Amelle_berrabah) early Saturday after arriving in Abu Dhabi, where the British pop trio are performing for the Formula One weekend of activities. The Sugababes singer tells readers:

We’re just chilling now, waiting for bags then off to Abu Dhabi.xxx

Finally the pic goes bloody through!! This is of us on the plane earlier.xxx

March 31, 2010 – Amelle Berrabah jumped out of a plane earlier this month to raise money for cancer research and spoke with BBC News about how it was done in memory of her father Mohamed, who died from liver cancer eight years ago. “He was one of the healthiest men I’ve ever known in my life – always jogging, doing the marathon, really fit and healthy, didn’t ever drink so, yes, it was really hard to deal with that and I couldn’t really imagine life without him,” the Sugababes star said. “It’s just very hard to get over. It took me a good few years. I’d never talk about it for the first year, I even resented anyone asking me about him… I didn’t think they understood.” Watch the singer’s comments at bbc.co.uk.