Sugababes Clean Up, Westlife Clear Out Of Brit Awards

The Sugababes tell The Sun they are shocked about receiving three Brit award nominations on Monday. Heidi Range said, “It’s been an incredible year with two No1s and a platinum album. Now we’ve got three Brit nominations. It doesn’t get better than this.” Meanwhile, Westlife received no nominations for the first time in their career, and a judging panel insider remarked, “Maybe this is the beginning of the end. They’ve been around for a while now.”

Sugababes Happy To Cross Over

December 9, 2002 – Keisha Buchanan of Sugababes spoke with the Herald Sun about the group moving beyond simply being labeled pop. “It’s refreshing for us that we’re not put into a category,” Buchanan says. “Some people call us R&B, we won the MOBO award, which is for Music of Black Origin and is for R&B. People were arguing `Why are Sugababes there?’ But why shouldn’t we? We do R&B as well. It was refreshing when ‘Overload’ came out that no one knew what to call it. Was it indie? Was it R&B? Was it pop? That crossed us over from the beginning. That’s a good position to be in.”

Heidi Range Is Afraid To Fly

November 23, 2002 – The Mirror reports Sugababe Heidi Range will have to suck up the courage to fly to Australia with the band for a series of shows. The singer says, “I’m so scared of flying – it’s become the bane of my life. I had hypnosis but it didn’t work. I burst into tears as soon as I board and don’t stop until we land.”

November 21, 2002 – Sugababes star Heidi Range sparked health fears when she collapsed foaming at the mouth in a nightclub on Wednesday where Ms Dynamite was performing. “She didn’t look at all well when she came into the venue, she was unsteady on her feet and didn’t look happy. It was very hot in the club and she didn’t look like she was coping,” a witness revealed to The Sun. “She made for the exit but collapsed in a heap on the floor before she got outside. Then she was surrounded by the people with her.”

Sugababe Has The Hots For Coldplay Frontman

November 17, 2002 – The Sunday People reports Sugababes hottie Heidi Range made a beeline for Coldplay frontman Chris Martin without joy at the MTV European Music Awards in Barcelona on Thursday. The singer wasn’t put off by the snub though, as she told her girlfriends in the bathroom, “He’s gorgeous, just the best. I don’t blame Gwyneth for being with him. I wish he was mine.”

Married U.S. Rapper Tries To Get Sugar With Sugababes Pal

September 19, 2002 – WENN reports British pop trio Sugababes were left stunned and disgusted when a married American rapper tried to romance their friend after at London’s Party In The Park this summer. Singer Keisha Buchanan says, “This one American rapper, we were in his hotel room after Party In The Park, and he was all over my friend chatting her up, and I remember watching MTV Base and seeing him and his wife!” They won’t name his name, but the only married American rapper performing at the event was Ja Rule. 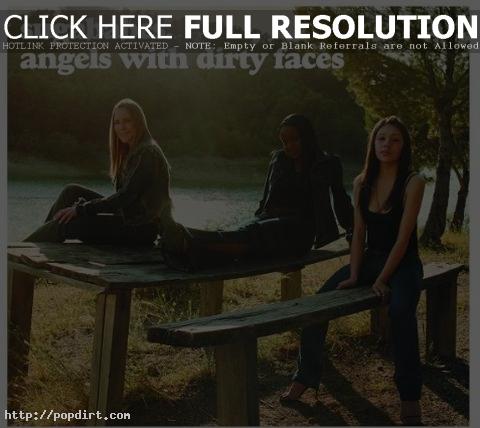 August 24, 2002 – Akin Ojumu of the Guardian reviewed the Sugababes new album ‘Angels With Dirty Faces’, giving it pretty low marks. “Unfortunately, the overall effect is more Britney Spears than Mary J. Blige,” Ojumu said. “The Sugababes don’t cut it as R&B divas; they were more fun when they were stroppy girls-next-door. When they get it right on tracks such as ‘Stronger’ and ‘Supernatural’ the Sugababes are cool, but the album suffers from the fact that it is obviously designed to break them in the States.” Read more.