Jeff Timmons checked in with fans on his blog at MySpace (@jefftimmons) on January 11th. Timmons writes:

I’ve been hearing that rumors are being spread regarding a 98 Degrees reunion. Although the possibility always exists that we may get together and do something again, there is no truth to the rumor going around that we are getting together soon. Sorry about that.

The singer added, “2008 is going to be a fantastic year. I’m dropping a new album, doing a couple of TV shows, working on a film, and producing other acts. I will also soon be touring again on a worldwide scale.

Us Weekly quotes Drew Lachey talking about the chances of a 98 Degrees reunion: “The boyband well dried up, basically. We’re, like, in walkers. It’s like the ‘man band’. I’m about to turn 30 this year, so it’s not really the ‘boy band’ anymore.”

April 23, 2006 – Former 98 Degrees member Drew Lachey phoned Mark and Mercedes in the Morning on Mix 94.1 FM in Las Vegas to talk about hosting Friday’s ‘Miss USA Pageant’, ‘Dancing with the Stars’, his brother Nick Lachey, and about the time he played basketball with Producer J.C. mix941.fm has since removed the audio.

March 24, 2006 – Drew Lachey and wife Lea welcomed their first child, a daughter, Thursday in Los Angeles. “Mom, Dad and baby are all happy and healthy,” a rep for the couple, both 29, told People.com.

March 24, 2006 – NBC announced recently that ‘Access Hollywood’ host Nancy O’Dell and ‘Dancing With The Stars’ season two winner Drew Lachey of 98 Degrees will host the 55th Annual Miss USA 2006 Pageant. The show will be telecast live on the network from Baltimore, Maryland on Friday, April 21st at 9-11 PM ET/PT.

Jeffre Loses Mayoral Bid, But 98 Degrees Fans May Be Winners

Justin Jeffre of 98 Degrees didn’t do so well in his bid to become Cincinnati’s new mayor. The singer came in a distant fifth place in the nonpartisan primary held on Tuesday, getting just 2 percent of the vote, or 708 votes. “I feel good,” a tired Jeffre told MTV News Wednesday morning (September 14). “I think we did well given the lack of coverage that the local media gave my campaign. I was a grass-roots candidate and not one of the big-money, big-party politicians and I got some national and international attention, but the local media chose to marginalize my campaign, which I think was a great disservice to the community.” Jeffre also revealed plans for a 98 Degrees reunion. “Nick and Jeff [Timmons] have studios in L.A., so we’re going to get together and start writing and working on our next project,” Jeffre said. “Everyone is ready to come together and it’s taken this long, so we’re in no hurry to drop something before we feel like we have things the way we want them.” Read more.

Mark Bialczak of The Post-Standard spoke with 98 Degrees star Jeff Timmons who was in Syracuse to promote his upcoming holiday show. Asked about the status of the #3 boyband, Timmons said, “We’re still calling it a hiatus.”

As for bandmate Nick Lachey’s rising fame following the MTV reality show ‘Newlyweds’ with wife Jessica Simpson, Timmons says, “I don’t think I could have done it. For any young couple, it’s hard during the first two years of married life. It’s especially hard for two young celebrities.”

JeffTimmons.com reports that during the 98 Degrees Fanfest 2003, Jeff Timmons will appear and sign copies of his new CD, ‘Whisper That Way’ at this year’s 98° FanFest in Cincinnati, Ohio on August 8th and 9th.

Searches for boy band on hiatus 98 Degrees lagged far behind their counterparts *NSYNC and the Backstreet Boys during November on pay-per search engine Oveture.com. The quartet got 17,248 searches, while the recently married Nick Lachey led searches for individual band members. For a complete list of 98 Degrees related searches, read on.
END_OF_DOCUMENT_TOKEN_TO_BE_REPLACED

Ali Landry Was ‘Tripped Out’ Over Kissing 98 Degrees

FHM magazine asked Ali Landry about her appearance on the 98 Degrees video ‘I Do (Cherish You’, which she played the group’s love interest, and if she ever though ‘I’m rolling around on the beach with the third-coolest boy band’. “No! The only thing that tripped me out was that I had to kiss all the guys,” she said. “Kissing is a very big deal for me. If you kiss me, you’re going to be my boyfriend.”

Quddus hosted MTV’s Total Request Live on Monday where Ali Landry was the celebrity guest. Ali touched on her work with 98 Degrees in the ‘I Do’ video, revealing that she was never informed of the fact that she’d have to kiss all of the guys in the video, which she didn’t appear to happy about having to do. Read on for a transcript.
END_OF_DOCUMENT_TOKEN_TO_BE_REPLACED

You Have To Wonder Why 98 Degrees Bothered 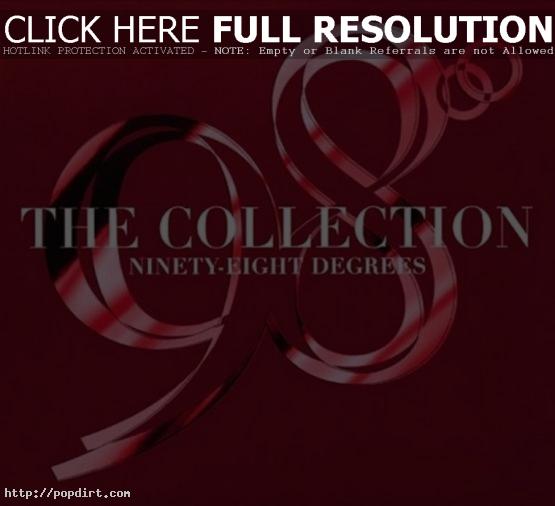 Dan Aquilante of the New York Post reviewed 98 Degrees new album ‘The Collection’, and wondered what the point of the new release is. Aquilante writes, “Despite the group’s proficiency in the art of harmony – which is displayed nicely on this career retrospective album – you have to wonder why anyone bothered to gather these songs at all.” He also called the new tune a “yawn”.