Abs Breen Gets Dumped By BMG

The Mirror reports former Five star Abs Breen has been dumped by record label BMG after a string of flops. “Abs is a lovely chap but it’s hits that count and he just wasn’t producing them,” an insider remarked. “The best thing for him to do would be to leave it a year or so and then go on to a reality TV show and pull a contestant. It seems to have worked a treat for Peter Andre.”

On the eve of the ever-more-corporate Brits, Music Choice has announced the second annual Naomi Awards 2004, and named Atomic Kitten, former Five star Abs Breen, Mariah Carey, Gareth Gates and Kym Marsh as award winners for their (lack of) contribution to the British Music Industry. Mariah has been chosen as the Worst International Female, Abs as the Worst British Male and Atomic Kitten is the Worst British Group. Check out the list of winners including Gareth Gates and Cheeky Girls at MusicChoice.co.uk.

February 5, 2004 – Gareth has opened up about his brief fling with mega-boobed pin-up Jordan. He tells Top of the Pops magazine: “I was embarrassed. I didn’t want my mum and dad, my family and my fans to find out in that way.” As for how he feels about her now, Gareth admits, “Obviously, we’re not the best of friends. That’s it really.”

Pop Rejects Sarah Whatmore And Abs Console Each Other

With Sarah Whatmore and former 5ive star Abs Breen watching their music careers go down the toilet with weak sales, The Sunday Mirror reports the on/off pair have turned to consoling each other. A mole at London’s Pop club revealed, “Abs and Sarah were snogging non-stop. They didn’t care who saw them.” Whatmore’s debut was shelved earlier this year, while Abs faces the axe at BMG.

Abs To Be A Special Guest On Beyonce’s Tour

According to Absessive.com, former Five star Abs Breen will be the special guest artist on Beyonce Knowles UK Tour from 3-17 November. Tickets are still available for most of the concerts at Ticketmaster.co.uk and you can check the links on the News/Schedule page at Absessive.com.

Top of the Pops has a video clip of former Five star Abs Breen performing his latest single ‘Miss Perfect’ along with Nodesha on the show last Friday (September 5). Check out the video clip via YouTube below. 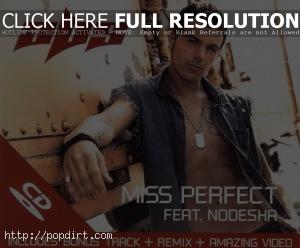 Former Five star Abs Breen is back with the new video ‘Miss Perfect’. The track is off the British pop singer’s upcoming solo debut album ‘Abstract Theory’, released on Sony BMG. Watch it online via YouTube below. The single is out August 25th in the UK.

The Sunday People reports Pop Idol star Sarah Whatmore has been enjoying secret dates with former Five star Abs Breen in Los Angeles. Abs hooked up with her while he was filming a video for his latest release ‘Miss Perfect’ and she was there finishing off her debut album with BMG. Abs says, “She’s a real good kisser.”

Former Five star Abs Breen tells The Mirror that when he was filming the video for his new single ‘Miss Perfect’, out on August 25, in Los Angeles he swore at partygoers attending Destiny’s Child star Beyonce Knowles’ party for her sister Solange. “Beyonce was having a party at the hotel,” Abs explained. “We tried to gatecrash but her bouncers wouldn’t let us in. My room overlooked it so I tried climbing down but we were too far up. I gave up and went to bed. But at 2am I could hear her singing ‘Happy Birthday’ to her sister. I went to my balcony and shouted: ‘Shut the fu** up!'”

The Sun reports former Five star Abs Breen has labeled the guys in Westlife as “ugly”. He explained, “They’re as ugly as each other, except Bryan McFadden – he’s even uglier than the rest.”