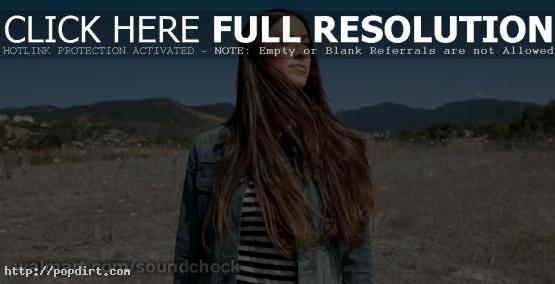 Alanis Morissette brought her new album ‘havoc and bright lights’ to Walmart Soundcheck for a special live performance and exclusive sit-down interview. The set list included ‘Woman Down’, ‘You Learn’, ‘Havoc’ and ‘Guardian’.

During the interview, the Grammy-award winning singer discussed how now being a mom influenced the recording of the new album, how her song ‘Guardian’ was about her son Ever Imre, learning to reach out for help as a mother, trying to manage her time to avoid being a workaholic, the message behind the female empowering track ‘Woman Down’, her love of decorating and how this record “nails every sonic soundscape that I live for.”

Talking about the album’s recording process, Alanis said, “I wrote the record when my son turned 5 1/2 months. We build a make shift studio in our house so that I could breastfeed and be available for my son and write at the same time. I definitely reached that critical juncture, where I was at that Y in the road where one side was career and the other side was choosing momhood full time, and I decided that I didn’t want to have to pick.”

Discussing the maternal influences on the song ‘Guardian’, she said, “The chorus is about my son, and this protectorship, this momma bear that emerged. I was always channeling my material energy, often times in very inappropriate ways with certain ex-boyfriends, and so now that I have this son it’s really appropriate for me to love him in this kind of way. Then I saw the difference in how I was loving him and how I wasn’t taking care of myself, so the verses are about me growing this inner mom and inner parent frankly to take care of myself better.”

On what she’s learned about motherhood, Alanis said, “The greatest lesson I’ve gleened from being a new mom is to reach out for help. The women’s movement was such that for a long time we were property, so we were owned, and we were very dependent. Then it segued into this independence, burn the bra movement, so we were really independent and it was all about autonomy. Now in 2012 it really feels like this interdependence, new paradigm. It feels like it’s approrpiate to need each other, to be empowered and to actually say I need your help, so I’ve learned how to reach out for help and seek support.”

Check out the performances and interview at soundcheck.walmart.com/alanis-morissette, while additional pictures from Alanis appearance can be viewed below the cut. END_OF_DOCUMENT_TOKEN_TO_BE_REPLACED

Alanis Morissette checked in with fans on her official web site at Alanis.com with a holiday message in celebration of Thanksgiving. The singer songwriter says:

For those on this planet celebrating Thanksgiving….
wishing you the sweetest and most restful holiday time….
happy native indian day
happy families-gathering-together day
and if you’re not gathering with nuclear or extended family…
happy day, period. :)

sending a big hug to you and yours.
with you with you,
oxox
alanis

Alanis Morissette appeared on ‘Chelsea Lately’ the other night to discuss her recent pregnancy announcement, making her lifestyle more baby-friendly, how she met her husband Mario “MC Souleye” Treadway, having a day named after her in Canada, making another appearance on ‘Weeds’, and more. Explaining how she learned of her pregnancy, Alanis said, “I talked to my doctor and he basically said, ‘This looks like a screen of a pregnant lady’, and I said, There’s still a chance that I’m not though, yes?’ He said, ‘About as likely as my getting a sex change’. So I said, ‘When are you getting a sex change?'” Watch the interview via YouTube below.

Alanis Morissette checked in with fans on her blog at MySpace on Wednesday (August 11), confirming news that she’s expecting her first child with husband Mario “Souleye” Treadway. Alanis writes:

Alanis Morissette checked in with her Facebook fans earlier today with news that she and musician Mario Treadway, aka MC Souleye, have gotten married. The 36-year-old singer songwriter tells readers:

Hi guys! So happy to share with you that my man Souleye and I got married. We’re very excited to embark on this journey with each other….sending love…connect soon xo – Alanis

Alanis Morissette was photographed arriving at Los Angeles International Airport with a male friend on Saturday (August 29). Morissette tells RollingStone.com she’s busy with ‘Weeds’, writing a book and working on new music. “I have an idea for two records,” she said. “Usually two journals make a record and I have about 10 full right now. As soon as the book is finished I’ll dive into one of the two.” 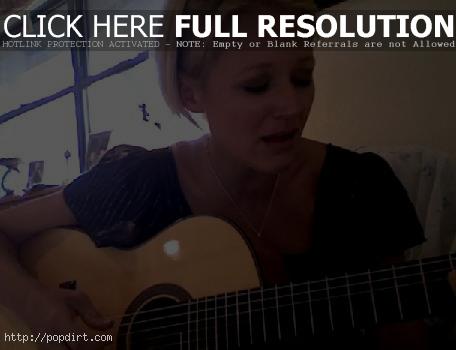 Asked why she was participating in the Saturday event asking people to dim their lights across the world for an hour beginning 8:30 PM, the singer songwriter said, “I just want to inspire as best as I can in people’s hearts their own activism on behalf of the planet that sustains and animates us.”

Asked if she thought this would work, she responded, “It depends what the intention or the agenda or the goal would be. Really, it’s to start the discussion and inspire people to reach out to our government, to encourage people to vote within the Senate, and have the president sign a bill that could really, you know, help the cause and shine a light on a cause that is, you know, I think one of the most important causes. There is no other thing to talk about if there’s no planet upon which we can live to do it.”

As for how Alanis herself adopts a green lifestyle, she told Larry, “I have solar panels and I compost. I design jewelry, so using sustainable methods to cull the gold to put into the jewelry. And then on a more public level organic cotton t-shirts for merch, the materials used for the CDs.”

Alanis Morissette filmed an in-flight PSA for World Wildlife Fund’s Earth Hour event, clipping her toenails while discussing Earth Hour, taking place on March 28th at 8:30 p.m., with the goal of having hundreds of millions of people in more than 1000 cities in 80 countries around the world will come together once again to make a bold statement of concern about climate change by turning off their lights for one hour – Earth Hour.

With their light switch as their ballot, millions of people across the country and around the world will cast a vote for action in the first global election on climate change.

Watch the public service announcement below.

Alanis Morissette paid a visit to the Amazon rainforest in Brazil, meating some of the indigenous people and took part in some local customs. Watch Globo.com’s coverage of the Canadian singer songwriter’s visit below.