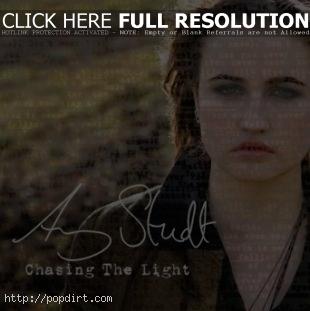 Amy Studt is out with the music video to her new single ‘Chasing The Light’, the lead single from the Bournemouth, England indie pop artist’s second album ‘My Paper Made Men’, out May 5th on 19 Entertainment. Watch it via Vimeo below.

According to the latest popbitch.com newsletter, recently dropped singer Amy Studt always insisted on taking her airdog into every recording session, where it pooped all over the floor. Instead of depositing the droppings in an outside trash, Studt cleaned up after her pooch with tissues, leaving them in her handbag where they stunk up the room all day.

Amy Studt Out At Polydor, But Pop Hopes Still Flicker

The Sun reports Polydor has dropped Amy Studt, the singer ‘Pop Idol’ creator Simon Fuller had been hoping would be the UK’s version of Avril Lavigne. The 17-year-old wasn’t able to connect with record buyers though, as an insider at Polydor admitted, “It’s a tough world and the fact is Amy didn’t sell many records.” But Studt’s pop hopes may not be dashed, as Simon is determined to make Amy a success and may now relaunch her under his own label.

Top of the Pops caught up with teen pop/punk singer Amy Studt and asked her if there any bands she listens to that she’ll knows her parents hate. “I’m a great believer in Limp Bizkit’s ‘Three Dollar Bill’ album because that holds a specific time in my past where I used to hang out with lots of anarchist punks types and they used to listen to Rancid and that sort of stuff, so I used to listen to that stuff,” Studt said. “Because my dad is a classical musician, when I put on a bit of drum and bass or rock, because his ear is not attuned to it like it is to classical music, then he finds it difficult to understand. We’ve talked about it and I’ve said: ‘Well Dad I don’t expect you to understand it because it’s not of your generation.’ I remember when I first heard a real rock song I thought ‘God what is that noise?’ but it takes time to listen past that and hear the music behind it. So I don’t expect him to understand. I have noticed though that when I play Marilyn Manson, my parents get a bit annoyed, I tend to listen to him on headphones.”

BBC News Online spoke with Amy Studt, who says comparisons to Avril Lavigne are complimentary. “Everyone’s the ‘new somebody’, but I released my first single before her,” Studt said. “We both wore stripy tights in our video. I find it flattering to be compared to a huge star. I’m still just normal Amy, not living much of a crazy life.” Read more.

The UK’s answer to Avril Lavigne, Amy Studt stopped by Radio 1 to talk about her new single ‘Misfit’, which looks set to debut in the top 5 of the UK charts. While Studt is aware of the Lavigne comparisons, she doesn’t really see it herself. “To be compared to anyone who’s a huge star is always gonna be a compliment. I mean, I’m just a normal girl from Bournemouth and being compared to somebody who’s famous it’s like ‘Wow! Thanks, cool!’, whether I am particularly a fan of her or not,” she said. “I’ve actually got her album. I like to get people’s albums and listen to it and make my own impressions. I think it’s actually quite good, there’s quite good stuff on there. But it’s not really my cup of tea, personally.”

Avril Lavigne’s Life Has Been So Overprotected

June 12, 2003 – WENN reports Avril says she wants to be left alone by her overly protective minders and management so she can live like a normal 18-year-old. “I wish I could push the limits more often, but I sort of feel like a breakable doll,” she said. “I’m surrounded by people trying to protect me, telling me, ‘You shouldn’t go for a walk on your own, you shouldn’t see people on your own…’ But I just want to tell them to leave me alone. I want my life to be as normal as possible.”

Avril Lavigne Got Her Wish Granted In Australia

June 10, 2003 – Looks like Avril got her wish granted when she visited Australia recently. She said she really wanted to meet a koala bear and she did so during an appearance on a Australian TV show Rove.