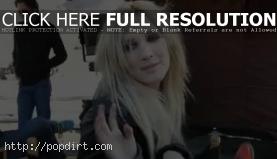 Ashlee Simpson is out with her new single ‘Little Miss Obsessive’, featuring Tom Higgenson of Plain White Ts, from the pop singer’s upcoming album ‘Bittersweet World’, out April 22nd on Geffen Records. Listen to a 90 second clip of the track in lo and hi windows media player formats. 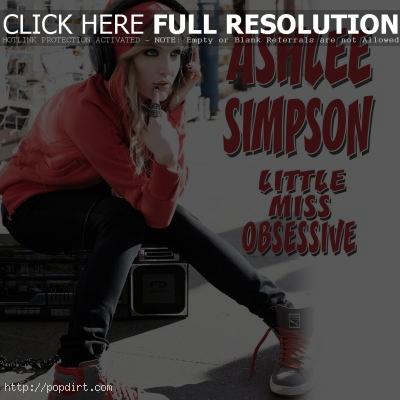 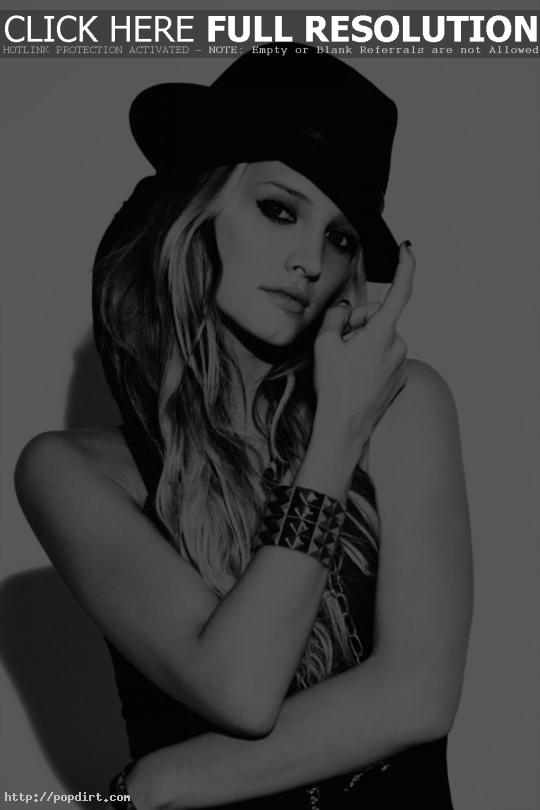 OK! magazine caught up with Ashlee Simpson as the singer prepares to release her third album ‘Bittersweet World’ on April 15th. “It’s going well,” the 23-year-old said. “I’m busy hitting up all the radio stations now. We have a new single, ‘Little Miss Obsessive,’ coming out. Everything is great!” But shockingly poor radio play of the disc’s crucial lead single ‘Outta My Head’ would suggest otherwise, explaining the rush to release a second single well before the album comes out.

Ashlee also had a bit of advice for Nicole Richie amidst reports the ‘Simple Life’ star may take on a Broadway role she’s already experienced – Roxie Hart in the hit musical ‘Chicago’. “Work really hard,” Ashlee suggested. “And say your prayers!”

February 11, 2008 – Ashlee Simpson checked in with JoJo Wright at the KIIS FM studios in Los Angeles, giving the DJ advice on how to deal with fame, how to react to the paparazzi, and showed off the new peace sign tattoo she got on her middle finger. Video at kiisfm.com has since been removed.

Ashlee Simpson, who visits ‘Total Request Live’ on Monday and ‘The Sauce’ on Wednesday.

Jordin Sparks, who performs on ‘TRL’ on Monday and visits ‘The Sauce’ on Monday.

Mandy Moore, who gets cooking lessons on ‘Rachael Ray’ on Monday.

Missy Higgins, who performs on ‘Jimmy Kimmel Live’ on Tuesday.

Janet Jackson, who visits ‘TRL’ on Tuesday and ‘The Ellen DeGeneres Show’ on Friday.

Miley Cyrus, who visits ‘The Tonight Show with Jay Leno’ on Wednesday with her father Billy Ray.

Barry Manilow, who performs on ‘The Late Late Show with Craig Ferguson’ on Wednesday.

Kenna, who performs on ‘The Late Show with David Letterman’ on Wednesday.

Cat Power, who performs on ‘The Tonight Show’ on Thursday.

James Blunt, who performs on ‘Late Night with Conan O’Brien’ on Thursday.

Josh Kelley, who performs on ‘Live with Regis and Kelly’ on Thursday.

Sara Bareilles, who performs on ‘TRL’ on Thursday and ‘The View’ on Friday.

Raven Symone, who visits ‘Live with Regis and Kelly’ on Friday.

Ashlee Simpson ‘Outta My Head (Ay Ya Ya)!’ Making The Video

Footage from the making of Ashlee Simpson’s new video for ‘Outta My Head (Ay Ya Ya)!’ has been posted online. The clip features a behind-the-scenes tour, taking you straight to the video shoot and offers a glimpse into Ashlee’s experience on set. Simpson explained the story behind the Salvador Dali inspired video, and she provided a peek into what it was like to film stunts on a harness and learn how to punch for her fight scene. Also seen in the clip are her Fall Out Boy boyfriend Pete Wentz and Kenna.

“I wanted to do a video about realism,” Ashlee explained. “I’m a big Dali fan. It’s definitely an interesting video. This video is definitely a physical video. I got to be on a harness for the first time, so I did spinning around, and I was upside down. I got to punch, which I don’t really get to do in my real life, so it’s always fun. Anything you want to do you can do it in a video. So far, probably the best thing that I’ve done is being on the harness. Being able to fly, I kind of felt like Peter Pan.”

Ashlee Simpson & Pete Wentz Out And About In Miami 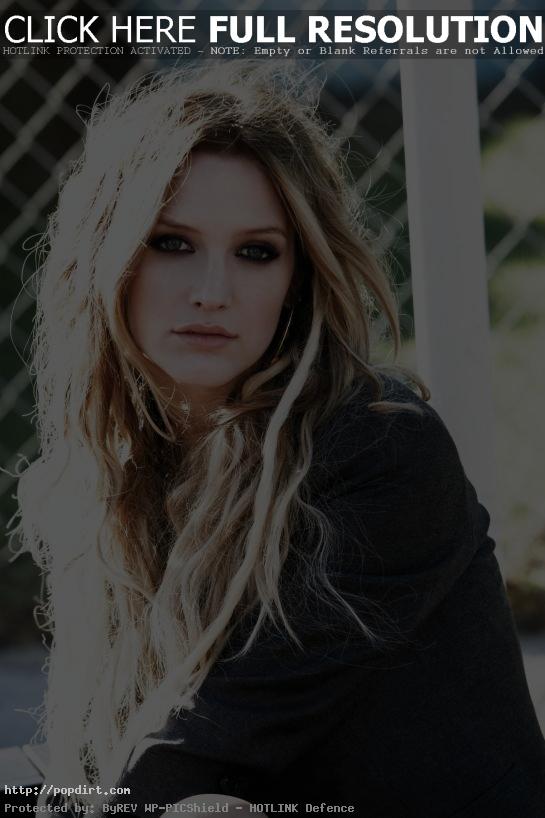 Ashlee Simpson and boyfriend/Fall Out Boy bassist Pete Wentz were spotted in Miami, Florida on Tuesday (January 1), with Pete holding a few shopping bags in one hand and Ashlee’s hand in the other, while both sporting sunglasses after celebrating the new year. Pete is still sporting a leg brace after injuring his ankle in New Orleans during October’s Voodoo Music Experience. Pictures at flynetonline.com have since been removed.

Ashlee Simpson And Pete Wentz Countdown To 2008, Then Kiss

‘Entertainment Tonight’ caught up with Ashlee Simpson and her boyfriend Pete Wentz at the Shore Club in Miami on New Year’s Eve, where the Fall Out Boy bassist was DJ’ing. “He’s an awesome deejay,” Simpson said of her man. “I think it’s always fun to dance to. He plays a good ’80s hits as well so that’s always fun. And he plays the hits everyone wants to hear.” Ashlee also said, “Happy New Year everyone! I hope the year brings you much love and happiness.” The pair were also shown doing the countdown and sharing a kiss at midnight.

Video at etonline.com has since been removed.

Ashlee Simpson ‘Outta My Head (Ay Ya Ya)’ Video 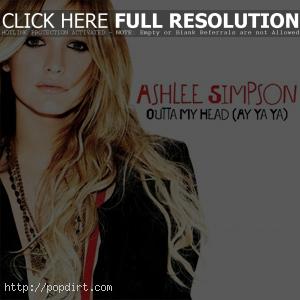 Ashlee Simpson is out with the music video to her new single ‘Outta My Head (Ay Ya Ya)’, from the Dallas, Texas pop singer’s forthcoming third album, out in March on Geffen Records. Watch it via YouTube below.

Fall Out Boy guitarist Joe Trohman has taken the story written by New York Daily News Gossip Columnist Ben Widdicombe regarding fellow band mate Pete Wentz’s girlfriend Ashlee Simpson very personally. So much so that he has issued a response to the news item on his personal blog on Friendsorenemies.com.

Widdicombe had published the following story:

Members of Fall Out Boy, who failed to get a Grammy nomination last week, are said to be blaming Pete Wentz’s relationship with Ashlee Simpson. “Grammy voters are fed up with Ashlee after she was caught lip-synching,” a pal tells OK! mag. “Her relationship with Pete has definitely affected public opinion of the band. The guys in FOB are furious – they think everything Ashlee touches is poison, and they really want her to stop touching Pete!”

Joe, who doesn’t typically respond to gossip, posted a response on his blog addressing the story which he calls “complete tabloid bullsh**.”

This just irked me-.. We don’t have any ‘pals’ that gossip to the tabloids over our business. We also don’t blame a certain someone (ASHLEE) for our lack of a Grammy nod. Don’t believe the gossip columns out there. This ‘poisonous’ person that was mentioned is nothing short of awesome, and we fully back her. Everything in Camp FOB is all good.

Ashlee Simpson Previews ‘Out of My Head (Ay Ya Ya)’ Video

Ashlee Simpson spoke with Billboard magazine about the music video to her new single ‘Out of My Head (Ay Ya Ya)’, which the 23-year-old filmed on Thursday (December 6). “One of my favorite artists is Salvador Dali,” the singer explained. “You’ll see a little bit of that surrealism in it. There’s a bit of ‘Being John Malkovich’ in there too. It’s a little out there.” As for when Ashlee wants to hit the road in support of her yet-to-be-titled third album, due out in March on Geffen Records, she said, “I want to do like a smaller club tour first. Probably around February, we’ll be back.”

November 30, 2007 – AOL Music just premiered Ashlee Simpson’s new single ‘Outta My Head’, produced by Timbaland from the 23-year-old’s forthcoming third CD. Simpson calls the disc “a fun party album … silly and quirky, like my friends and I can be sometimes. It’s a record in which I’m saying, ‘I am woman and I won’t take anyone’s sh**.'” Awesome.” AOL has since removed the audio.

November 5, 2007 – Fall Out Boy bassist/spokesmodel Pete Wentz was a special guest DJ at Fever Nightclub in Atlanta, Georgia on Saturday night (November 3). Joining him at the club was girlfriend Ashlee Simpson, who chatted up the club’s owners in the upstairs VIP Room. photobucket.com pictures have since been removed.

September 12, 2007 – Carolina of New York’s Z100 was at the 2007 MTV Video Music Awards with Ashlee Simpson in Las Vegas over the weekend, where they talked about her new album, having “a bit of a different sound, but you’ll still have that same attitude and that same rock kinda feel as well”, and doing a new music video soon.

The brief clip at akamai.com has since been removed.

“As far as how much Michelle looks like Ashlee Simpson, to be totally honest, I’m a little bit skeptical at this point,” hair stylist Jeffrey Altenburg said. “She’s really, really pretty, and I’ve seen a couple of things that might work, but we’ll see. Hair and makeup can do some pretty cool things.”

Photographer Richard Sibbald added, “To be totally honest, when I first saw Michelle, I didn’t see Ashlee Simpson. It wasn’t until she smiled, then I could see okay, I’ve got something to work with.”

After it was all done, Michelle said, “My favorite part of the day was the photo shoot because it was fun and I love the music and I loved everyone clapping and they got me really into it. The most terrifying part of the day for me would be getting my eyebrows dyed, but it turned out really well and I ended up really liking it so it was good.”