Ashley Tisdale checked in with Popstar! magazine at the premiere of ‘Sharpay’s Fabulous Adventure’, where she encouraged viewers to vote for ‘Hellcats’ for the magazine’s 2011 Poptastic Awards. Watch the brief message via YouTube below.

Ashley Tisdale stars in ‘Sharpay’s Fabulous Adventure’, reprising the role that made her famous in the ‘High School Musical’ trilogy. The singer and actress spoke with ABC News about the project, Broadway, starring in ‘Hellcats’, how this Sharpay role was a great ending for a character that gave her so much, and no plans for now to release more music. Watch the interview below. 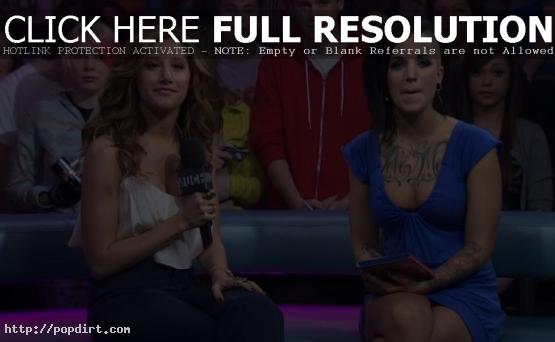 Ashley Tisdale was on MuchMusic’s ‘New.Music.Live.’ on Thursday (April 14). The singer and actress was in Toronto to promote her new DVD movie ‘Sharpay’s Fabulous Adventure’. The 25-year-old talked with host Phoebe Dykstra about shooting the movie in Toronto, being the starring actress and executive producer in the film, how this is the end for the ‘High School Musical’ character, other projects she hopes to do, and if we can expect another album soon before they did a competition with a show ‘HSM’ expert about who knows more about the Disney movie trilogy. Video of the ‘NML’ interview at newmusiclive.ca has since been removed.

Ashley Tisdale visited ‘Lopez Tonight’ on Monday (January 24), where the ‘Hellcats’ star talked about host George Lopez being her neighbor, the fire that broke out on the set of ‘Hellcats’, and getting attacked in her car by ‘High School Musical’ fanatics. Plus, Ashley remembered her days working in shopping mall clothing stores and getting fired while trying to take advantage of one store’s discount, even though she hadn’t even started work yet. Watch the interview via YouTube below. 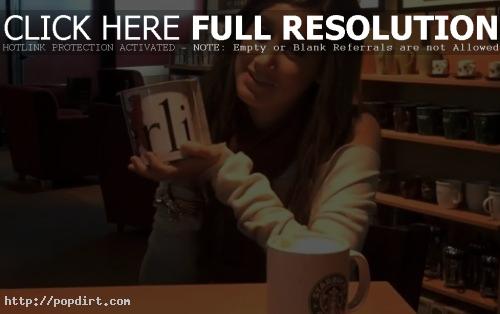 Hey guys, it’s been awhile and just wanted to check in! As you know I just got back from shooting Sharpay’s Fabulous Adventure in Toronto. It was so much fun and such a growing experience being in front of the camera and also executive producing. I got to celebrate my birthday for the first time on set which was amazing. The cast and crew made it so special I wouldn’t have spent it any other way. I also wanted to thank the fans for all the support and love. I watched all the videos and it put a huge smile on my face! I just recently got home to re organize my stuff (and of course do the hair lol), then head out to Vancouver for Hellcats. Super excited for everyone to see this next project. I’ll be updating you on all the cheerleading craziness! Love you all xoxo -Ashley

Get an early look at college life with ‘Hellcats’, coming this Fall to The CW, in an extended trailer posted at YouTube. The clip features Aly Michalka of 78violet dealing with her scholarship getting canceled by trying out for the school’s cheer squad, impressing the cheer captain Ashley Tisdale. Watch it at YouTube.

A preview of the new CW show ‘Hellcats’, starring Ashley Tisdale and Aly Michalka of 78violet, has been posted online. The series will be airing Wednesdays this Fall. “‘Hellcats’ is the world of competitive cheerleading, and I play Savannah Monroe,” Tisdale told MTV News. “She’s the captain of the cheerleaders and Marti, played by Aly Michalka, has lost her scholarship. So she has to join cheerleaders. And it’s a lot of fun. It’s a drama, but it still has the fun energy. It’s very fierce.” Watch the preview via YouTube below.

Ashley Tisdale and her boyfriend Scott Speer were spotted exiting Beso Restaurant in Hollywood the other night. The happy couple were hosed by paparazzi cameras and asked several questions including if she’s seen ‘Robin Hood’ and who killed Tupac Shakur, which were all ignored. Pleas by the snappers for Ashley and Scott to kiss were also disregarded. Watch Hollywood.tv footage below.

Ashley Tisdale bared her midriff as she shot a cheerleading scene in a matching sports bra and shorts outfit for The CW pilot ‘Hellcats’ on Friday (April 16) in Vancouver, BC. Check out pictures from Just Jared. The singer/actress told her Twitter followers (@ashleytisdale): 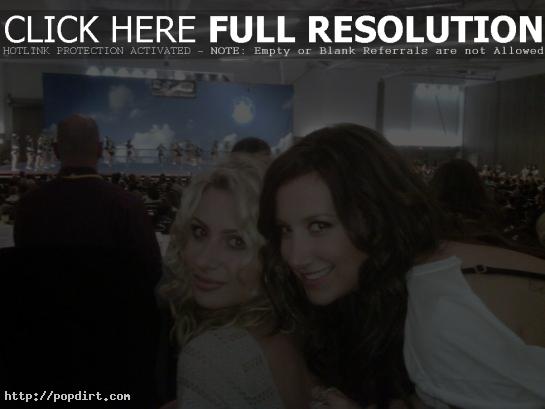 Ashley Tisdale checked in with her Twitter followers (@ashleytisdale) on Sunday (April 11), after spending a day watching a cheer competition with her ‘Hellcats’ co-star Aly Michalka. The 24-year-old writes:

@78violet and I at a cheer competition lol. So much fun! [They’re] pretty amazing!