Avenue updated fans on their blog at MySpace (@avenuegroup) on Thursday (April 2), revealing that they are breaking up. The UK boy band tell readers:

We wanted to give all our fans and champions out there a massive thank you for your support. Despite having a great time together as a band we have decided to go and follow our own separate career paths.

Thanks again for all your love and support for Avenue and it would be amazing to see you guys out there along the way as we make our own separate journeys too.

In the final fan submitted question to Avenue, the guys answer which song they would most like to have written. Among the responses from Max George, Jonny Lloyd, Scott Clarke, Ross Candy, Jamie Tinkler and Andy Brown: ‘Yesterday’ by The Beatles, ‘Like I Love You’ by Justin Timberlake, and ‘(Sittin’ On) The Dock of the Bay’ by Otis Redding.

Meanwhile, the British boy band also announced their upcoming tour has been cancelled. “Due to circumstances beyond the boys’ control, their February tour will no longer be taking place,” a posting at their MySpace blog announced. “We’re really sorry for the disappointment to all of you who were going to see them. Full refunds will be available from wherever you bought your ticket.”

The first episode of Avenue’s brand new web show ‘Only Fools & Avenue’ has been posted online, featuring Jonny Lloyd showing off his questionable gymnastic skills, leaving his bandmates doubled over in laughter.

Jonny’s antics may have backfired on him though, as he told fans on the British boy band’s blog at MySpace (@avenuegroup):

Well I’ve been flat on my back with a sore neck!! I don’t really know what happened to it either, but I’ve been bed-ridden for 3 days. I was meant to go to a friend’s party and I couldn’t go because my shoulder was absolutely killing me.

Avenue’s Max George and Ross Candy took part in a word association game called Mallets Mallet in a video clip posted at the British boy band’s YouTube channel. The first person unable to come up with a related word got smacked in the head with a stuffed shark.

Jonny Lloyd of Avenue checked in with fans on the boy band’s blog at MySpace (@avenuegroup) on Thursday (November 20), with an update from their current tour. Lloyd writes:

We’ve been performing on the McFly tour in Brighton and Cardiff this week which has been incredible. We’ve always dreamed of doing gigs in arenas and now our dreams have come true. We also never imagined we’d be so accepted by the crowds, we thought they’d just be there for McFly, but judging by their reactions and all the banners they’d made, they were there to see us too, which was ace!

The tour’s heading to Nottingham tonight which should be good, then Manchester tomorrow which is Max’s hometown. We’re really looking forward to Manchester as all our families are coming over and we’re having a big house party to celebrate Max’s dads wife’s birthday. Then on Sunday night we’re doing a show in Scotland. It’ll be the first time we’ve stayed at Ross’ house. His family own a sandwich shop which Ross reckons does amazing sandwiches, so we’re dying to put them to the test.

Ross Candy is the latest member of Avenue to take part in a rapid fire series of questions about his preferences – such as nights in or nights out, sun or snow, trainers or shoes, boxers or briefs, beauty or brains, Elvis or Michael Jackson, day or night, and many more.

Max George of Avenue took on a rapid series of questions on the British boy band’s YouTube channel. His responses to whether he prefers chocolate or jelly sweets, football or rugby, guitar or piano, singing or dancing, DJ or live band, ’80s or ’90s and more have since been removed at YouTube.

Ross Candy of Avenue updated fans on the group’s current tour opening for McFly in a posting at their blog at MySpace (@avenuegroup) on Tuesday (November 11). Ross tells readers:

Well the McFly tour so far has been absolutely amazing. The reaction from the audience has just been unbelievable – it’s amazing when the lights go down and everyone screams and then we come on and they start screaming even louder!

The first night we were really nervous, but we just got such a buzz when we came off. A lot of the audience knew ‘Last Goodbye’, so that was great to see them singing along. We watched McFly perform for the first time last night in Belfast – normally we have to go straight off after the show, but we were able to stick around that time, and they thanked us on-stage and we got a massive scream!

Avenue’s Questions For The Fans 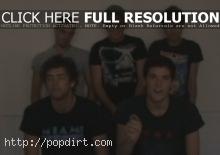 Jonny Lloyd of Avenue answered a rapid fire round of questions on the group’s YouTube channel. Among the responses – Jonny said he preferred boxers over briefs, beauty over brains, guitar over piano, pub over a club, Elvis over Michael Jackson, and night over day.