Gospel Music, the side project by Owen Holmes of Black Kids, is out with the video to his new single ‘Automobile’, featuring Camera Obscura’s Tracyanne Campbell. The song is off the indie pop artist’s EP ‘duettes’, out November 29th on Fierce Panda. Watch it via Vimeo below.

Ali Youngblood of Black Kids checked in with fans on the Jacksonville, Florida indie pop group’s blog at MySpace (@ciaoblackkids), talking about being home to work on their second album. The keyboardist writes:

So we’re home in north Florida working on the next album!!! A new song every week (my word). Can’t wait to make THE album and tour again. I’m hoping this time, with everything we’ve learned, you get an experience like no other. We want you… oh yes… we want you… to have a great time!!!

Concert.tv caught up with Kevn Snow, Dawn Watley and Ali Youngblood of Black Kids, where the Jacksonville, Florida indie pop group talked about how they came together as a band, having a goal to have more fun with it than with their prior projects, believing their music is like dark comedy, plans to put out an EP early this year, and how the UK is willing to embrace new artists quickly, while it’s a longer process in America.

On the band’s origin, Kevin said, “Well Reggie, Owen and I, we’ve been playing in bands together for over 10 years, and each one was a little too serious. So we started this band and invited the girls in and the goal was sort of to have more fun with it, not take ourselves so seriously. We did want to draw a lot of influences from the best pop music that we love from the ’70s and ’80s. Just sort of shove it all together and make it fit.”

On the appeal of their music, Dawn said, “I think our music is like dark comedy. It’s funny and fun at the same time, but you’re drawn in by kind of the heartache and underlying tones and things like that.”

On plans for new music, Kevin said. “We’re gonna try to do an EP at the beginning of next year. We’re anxious to get some new music out there.”

Yahoo! Music’s ‘Who’s Next?’ features Black Kids in an exclusive performance of ‘I’m Not Gonna Teach Your Boyfriend How To Dance With You’ and an interview.

Reggie Youngblood and Owen Holmes talked about forming the group, comparisons to The Cure, the story behind their breakout single, getting a bid annoyed by people thinking they’re overnight successes, how they came up with Black Kids as their name, and the musical tennis match played by British and American artists.

“The origin of this group goes back about a decade,” Reggie said about the group’s origins. “We played in various groups in Jacksonville over the years. It started getting kind of stale, so we invited Ali, my sister, and her best friend Dawn (Watley) to join because they’re all about partying.”

“I could see how there might be a part of a song that resembled The Cure, but they’re just so much better than we are,” Reggie confessed.

“I’m Not Gonna Teach Your Boyfriend How To Dance With You’, like a lot of our songs are about a love triangle,” Reggie explained in regards to their song with the mouthful title. “There’s a guy and he has this very specific relationship with this woman. They get along famously on the dance floor but that’s about it. It’s somewhat biographical.”

As for the perception they are an “overnight success”, Reggie responded, “I don’t know about overnight, maybe a fortnight.” Owen continued, “As we’ve said, we’ve been at it for 10 years. It is kind of annoying people think we just picked up instruments. It sounds like that obviously.”

As for the group’s name, Reggie said, “The name Black Kids came into being.. it started when Owen here came across an email that was sent from this woman to the mayor of Jacksonville. In this email, she was complaining about these kids who played basketball. It was obviously a euphemism for young black men, and she said the sound of them at play is more than I can stand. Someone said the sound of us at play is gonna be more than people can bare, so why don’t we call ourselves Black Kids That Play Basketball? My sister said that’s lame, why don’t we just call ourselves Black Kids, so we took the hint from the universe. Also it sounds bitchin’.”

Video of the performance and interview at Yahoo.com has since been removed. 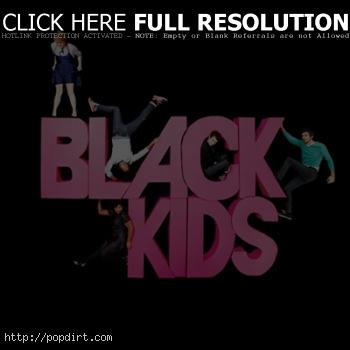 Black Kids are out with the video to their first single ‘I’m Not Gonna Teach Your Boyfriend How To Dance With You’, from the Jacksonville, Florida pop, rock, and dance band’s debut album ‘Partie Traumatic’, out July 22nd on Columbia Records. Watch it below.