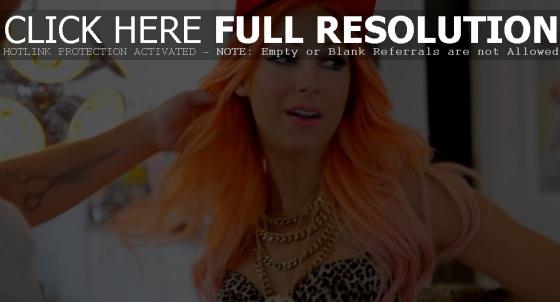 Bonnie McKee is out with behind the scenes footage for her ‘American Girl’ music video, which was directed by Justin Francis. The clip sees Bonnie at the video’s first shooting location inside an arcade with no pants and then switches to a mini market. Bonnie then checks in from her own house while getting her hair done. Viewers then get advice on how to “not” steal a car. ‘American Girl’ is off Bonnie’s upcoming album on Epic Records. Watch the footage via YouTube below.

Bonnie McKee updated fans on her blog at MySpace on Saturday (December 13), after performing at Hotel Cafe last Sunday and having a bizarre run-in with a woman who was “kind of dating” Backsteet Boys star AJ McLean. McKee tells readers:

While Johnnie [Newman] was playing I was wandering around aimlessly avoiding talking to anyone when this chick came up behind me and covered my eyes… She was like “Guess who?!!” and I was like “Huhuhuhuhuh I dunno!!” secretly thinking ‘why is this stranger touching me, I’m going to have a heart attack’ and then I turned around and she was like “Bonnie!!!!” and I totally had no idea who she was and I was like “Hi!!!!! Huhuhuhuh” and we shared a hug like I’d known her my whole life. Then she started yapping about how some AJ guy was coming and “don’t tell anyone I’m kind of dating him nudge nudge wink wink”, and I was like why do I care who you’re dating? I am just trying not to throw up from nerves about performing this show that I am completely unprepared for. She continued to talk my ear off (she had had a few… or something) and I continued to quietly panic and block her babble out, occasionally “mmhhmm”ing when it seemed appropriate until she showed me something on her Blackberry and was like “Look!! This is me and AJ!” and shoved it in my face. It was a picture of her [without a top] with some eyeliner wearing dude with a scruffy beard and I was like “Woah… That’s graphic.” I mean they were tastefully done. Black and white. Usually when you take topless photos they look embarrassing and tacky but somehow if they’re in black and white they’re ok. I don’t know what that’s about, but I’m making a mental note of it.

Anyway so she shows me these photos and I’m looking at her like… wait… I MUST know this person if she’s showing me naked pictures of herself within five minutes of seeing me, right? And just as I’m trying to connect the possible MySpace connection dots, she exclaims “Here he is!!” and this kind of shorter Mind Freak look alike dude saunters up to us and is like “Hi. I’m AJ.” And I’m still looking at them like “…and?…” who the fu** is this guy??!! She threw her arms around me and was like “This is Bonnie! She’s AMAZING!!” and then… she BIT my cheek. Like not even an inappropriate kiss, but a straight bat bite. It was painful, I’m not gonna lie. Luckily I was so dumbfounded and flabbergasted that I couldn’t feel a whole lot. She was very complimentary and sweet to me, I must say. And I finally figured out I vaguely knew her through some friends of friends… But needless to say it was not what I was expecting. Anyway he was very friendly and slightly mysterious with his guyliner and indie garb, but the whole thing creeped me out a little. All I could keep thinking was “I just saw you grabbing her bare breast on a Blackberry screen”. It was a lot to handle five minutes before a performance. I managed to back away slowly and continue my private little panic attack in a dark corner, when my boyfriend found me and was like “Do you know who that was?!” and I was like “Chris Angel?” and he was like “NO! That’s AJ from the Backstreet Boys!” I looked back at him again and tried to conjure up some eighth grade TRL visuals with that face and came up with nothing. He was pretty deep undercover I guess because I still did not recognize him at all! I was always more of an N’Sync fan anyway.

Bonnie McKee checked in with fans on her blog at MySpace (@bonniemckee) on Friday (November 14), after debuting some of her new material at a club in the heart of New York City’s Chinatown. Not having a band available, McKee performed to backing tracks for the first time, with an audience that included a celebrity. She writes:

So as I’m pacing back and fourth looking at this horrible stage situation trying to figure out what the hell I’m gonna do to keep this show entertaining, who do I see milling about? Ryan fu**ing Gosling. Awesome. This is gonna be great. Like what the hell am I supposed to do with that? He’s gonna be standing like three feet away from me while I’m conducting this musical experiment before his eyes. Maybe I’ll run and jump into his arms at the end of a song? In my freaking pink and blue outer space outfit?

Yeah. Or maybe not.

It was less that R G is so scary or intimidating and more that everyone else thinks he is, and that everyone else now perceives the pressure as being higher. Now everyone’s watching him watch me. Rad. What they don’t know is that actors don’t scare me. It’s the scrutinizing musicians that are terrifying. I’ve been in much scarier situations with Jack White, and that was just waiting at the airport. (check the blog hahahaha)

Bonnie McKee checked in with fans on her blog at MySpace (@bonniemckee) on Wednesday (November 12), discussing how she took on a guitar playing role on ‘CSI:NY’ even though she doesn’t play guitar, forcing the singer to take a crash course before hitting the set. McKee writes:

So I kinda sorta took the role of Eleanor Rivera, a street musician who plays GUITAR without telling anyone that I don’t, in fact play guitar at all. Whoops! I knew it was wrong and I did it anyway! haha….

I have taken minimal guitar lessons throughout my life. Once when I was fifteen in Seattle with a hunky guitar teacher that made my hands shake too badly to even hold a chord. Or it could’ve been the meth, who knows? LOL Those only lasted a few months… and then I gave it another shot when my ex bought me a guitar and showed me a trick or two. But I always kinda felt like “Why the hell would anyone ever want to play an instrument that fu**ing hurts so bad?!!” and I always gave up before I even had the chance to build up the calluses to numb the pain.

But this time, folks… I didn’t have a choice!! I knew it would be a great opportunity for me to finally buckle down and master this guitar thing I’ve been wrestling with my whole life. So I dusted off my old guitar and got to work! I had about ten days to figure it out, but they didn’t know which songs they wanted me to perform yet. I sent them 8 songs and then immediately was like “SH**!! Why did I do that? Now I have to learn 8 fu**ing songs in ten days!!!” Luckily, I tend to write in the same keys so as long as I knew the chords, I knew I’d be okay.

Bonnie McKee updated fans on her blog at MySpace (@bonniemckee) on Tuesday (November 11), reacting to the news of Barack Obama has been elected the 44th U.S. President. The American singer songwriter tells readers:

I have always been a fairly political person, and as you may have noticed, pretty liberal. When Bush was elected into office I was too young to vote and I remember feeling powerless and sad, before even knowing the damage he would quickly do to our country. Four years later, I registered to vote and got my voice out there, only to sit at home and watch each state, to my amazement, turn red, drinking the champagne I bought to celebrate his leaving the White House to drown my sorrows instead of toasting the end of four bad years.

This year, when I first heard that Obama was running, I felt a new sense of hope. There was something about him that genuinely inspired me. Sure, he’s good looking and has the sparkliest smile on the planet – but seriously, the way he spoke, even when he stumbled, he always had something to say. I wanted to listen. I wanted to help. I wanted to see what he could do for us, and now I get to find out!

I am so proud to be alive to witness this monumental event. I always heard our parents telling stories about the sixties and how everyone came together and flooded the streets and fought for what they believed in. Now for the first time in my lifetime, I know what it feels like to be a part of something big. I feel like my vote counted, and I am proud of that. 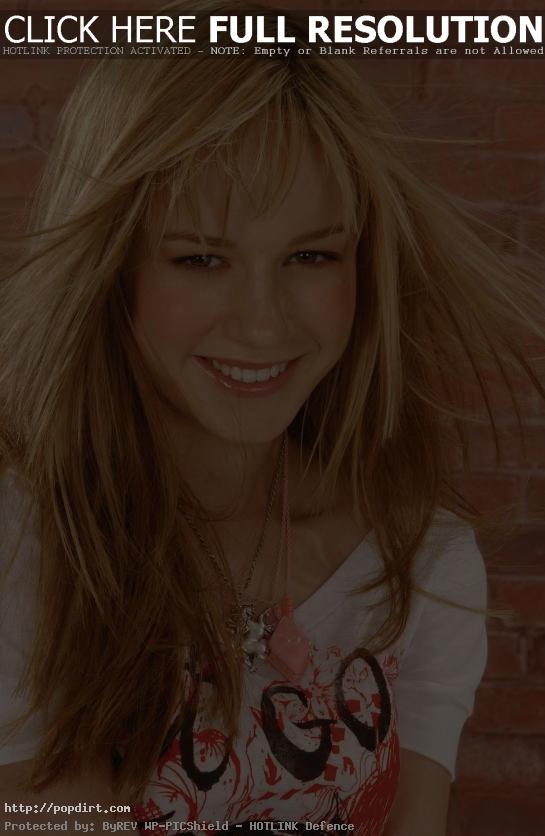 Ashlee A Diva Already And Bonnie McKee Turned Down By Joe?!

This is just a rumor being spread, so I have no way of actually knowing if it’s true. However, this is being reported by some people that were part of one of the high school bands that played during Ashlee Simpson’s Orange Bowl performance. Anyways, it was said that Ashley actually wanted to lip-synch but they wouldn’t allow her to because of all the backlash she received after SNL. Since they had to re-arrange some of the lyrics, she kept forgetting them during rehearsals and kept saying “Someone feed me my lyrics! Just feed me the lyrics!” She was very demanding. She also reportedly kept saying, “Wardrobe people, on stage NOW!” Someone did meet her mother, Tina, in the bathroom though and they said she was very friendly. The whole Simpson clan was there with Ashley that day. Last but certainly not least, Bonnie McKee is reporting that Joe Simpson did not allow her to be the opening act for Ashlee’s upcoming tour. The up and coming pop star stated that Joe was afraid she would steal the show and/or spotlight. Interesting!

Bonnie McKee (Reprise Records) has launched her new site at BonnieMckee.com. The site – in a magazine layout – is filled with with videos, news, and fashion (with original outfit designs by Bonnie herself).

Bonnie McKee is out with the music video to her new single ‘Somebody’. Watch it via YouTube below.