Brooke Fraser ‘Something in The Water’ Video 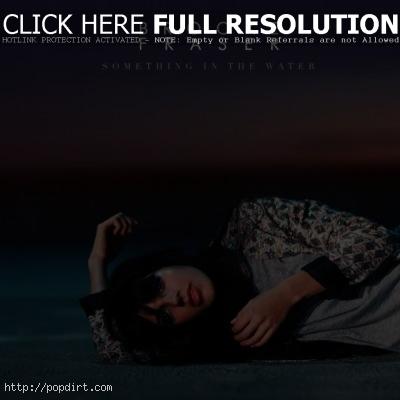 Brooke Fraser is out with the music video to her new single ‘Something in The Water’, off the New Zealand singer songwriter’s third album ‘Flags’, due out October 12th on Sony Music. Watch it via Vimeo below.

I’ve been in L.A. since the end of February writing my little hinie off and gearing up to make the record.

Just this week we set the dates for recording and it’s coming up mighty fast, so the pace goes into high gear from here and I don’t know when it will end, but I’m okay with it… more than okay.

I’ve been excited about giving you all some new material for a long time now, but needed to take some time for myself first to be still and let all the raw stuff rise to the surface so I could scoop it out and make some sense out of it. Or perhaps I mean make some art out of it. Making art seems an instinctual way of trying to make sense of things anyway.

Brooke Fraser checked in with fans on her blog at MySpace (@brookefraser) on Thursday (September 3), discussing her musical collaborations with Ben West and Willliam Fitzsimmons and the goal with her new album. The New Zealand singer songwriter tells readers:

I really want this next record to reflect my fondness for my musical family… something special happens when you meet and create with people who also value music as a facilitator of human connection and a forum for our humanity rather than a commercial enterprise.

Brooke Fraser checked in with fans on her blog at MySpace (@brookefraser) on Saturday (July 11), talking about being on the receiving end of a random act of kindness, and encouraging others to make a similar gesture for others. The New Zealand singer songwriter tells readers:

A few nights ago we were out to dinner with some friends at the end of a long day. There were seven of us at our table, and when we went to settle the bill at the end, the server pointed to the table next to ours (now empty) and said “the guy sitting there paid your bill”.

We didn’t know this guy and he was long gone by the time we discovered his incredible gesture… we were all completely stunned and so grateful.

Got me thinking about generosity… how startling it is… how awesome it is when we step out of our self-involvedness and do something for someone else, for no other reason than because we can.

Brooke Fraser Scared Inside By Bees

Brooke Fraser’s latest video blog features the singer songwriter attempting to play her guitar on the back deck only to get frightened back inside by bees. Brooke blamed the situation on some sweet smelling lotion she put on.

“If you look outside, these stalking ginormi flying things are waiting for me. Look at them circling. Circling like vultures waiting for me emerge. I thought they were just mean spirited, but as I thought about why they continued to hover outside and circled around like they haven’t before, I think maybe it’s because I put on some sweet smelling lotion today, so perhaps the sweet smelling lotion is my downfall.”

Watch “Attack Of The Killer Bees!” below.

Brooke Fraser updated fans on her blog at MySpace (@brookefraser) on Tuesday (April 28), talking about how she’s just beginning work on a follow-up to her second album. The New Zealand singer songwriter tells readers:

We released ‘Albertine’ in 2006 in NZ, 2007 in Australia and 2008 in America and toured our hinies off for three years straight. I haven’t exactly been holidaying since we came off of tour at the end of last year, but have been immersed in the very full and wonderful life I live under my married name and also getting in a lot of rest and community time. I basically needed a break from being ‘Brooke Fraser’ for a bit. By the time last year was coming to a close I was well, worn down by crises after crises and the constant wall of noise from certain dogmatic and vocal minorities trying to shove me and the music I make into a claustrophobic category in which I don’t belong. People who think they’re making the “secular” sacred when really they are doing the exact opposite. They ghettoise what is inherently inclusive and want a pat on the back for it.

Brooke Fraser checked in with fans on her blog at MySpace on Saturday (December 20), her first update since abruptly pulling out of the Hotel Cafe Tour due to illness. The New Zealand singer-songwriter tells readers:

Thanks to all of you who sent kind messages of concern and best wishes after I was forced to pull out of the Hotel Cafe tour (which I had really been looking forward to) due to ill health. Turns out when you tour for nine months a year for a few years in a row, eating gas station food, breathing recycled air and not exercising, your body eventually throws a bit of a tantrum to try and shout some sense into you.

Well, thank you body, I got the message loud and clear. A month of bed-rest and a couple of rounds of aggressive antibiotics later, I was recovered enough to head off to Africa for a month, a place you know is close to my heart. Husband and I just returned last week, now I’m in New Zealand for some family time, then I’ll be headed back to Sydney and taking a loooooooonnngggg holiday (at home).

The entire message has since been removed.

The following update was posted at Brooke Fraser’s MySpace blog on Tuesday (October 14) after the New Zealand singer songwriter was forced to drop out of the Hotel Café Tour due to illness:

Thanks for all your kind messages regarding Brooke’s illness which resulted in the cancellation of her appearance on the Hotel Café tour. She’s quietly on her way back to good health in Sydney and will be taking it easy for the rest of 2008.

We’re sorry to announce to fans that Brooke has been forced to pull out of the upcoming Hotel Café tour due to illness. Under doctor’s orders, she is unable to travel or sing for the next few weeks. This is sad news as Brooke was very much looking forward to sharing the stage alongside great artists including Meiko, Ingrid Michaelson and Priscilla Ahn on one of the most anticipated tours of the year. If you’re going to the Hotel Café shows, check the thehotelcafetour.com website for line-up information soon.

Brooke Fraser checked in with fans on her blog at MySpace on Monday (September 8), talking about her participation in ‘The September Sessions’ tour, which begins at El Rey Theatre in Los Angeles on Friday. Fraser writes:

I’m excited about this tour for a few reasons… we’re full band, in some beautiful venues and in a bus for part of it (i.e. we will get to sleep) but the main one would have to be the opportunity we have to bring my good friends World Vision on tour with us for the WHOLE THING!

This is something I’m able to do in Australia and NZ, but the first time it’s happened in the U.S. Many of you will know of my long-standing relationship with and commit to World Vision and their incredible work. I am a huge advocate of child sponsorship – my husband and I sponsor 11 children ourselves – and have had the privilege of visiting the field and seeing the effectiveness of the child sponsorship model first hand.

This tour we’ll be bringing along children from Rwanda (their profile cards that is) who have been heavily affected by HIV/AIDS. The money from your sponsorship ($35 per month) will help provide ARVs (anti-retroviral medicines) to medical clinics in your child’s community, provide clean water, food and healthcare for your child and go toward other development projects within your child’s area that benefit the whole community. The impact of sponsoring one child is huge and many more people are positively affected than simply the precious one you sponsor.