Brooke Hogan and her ‘Falling’ collaborator Stack$ took a trip to Miami’s biggest radio station, Power 96 for the DJ Laz Morning Show. The ‘Brooke Knows Best’ star dropped new info and revealed the name of her new album – ‘The Redemption’ – which is coming out in July.

She also talked about the falling out she’s having with her mother for dating boytoy Charlie Hill, being creeped out by visiting the house since he’s living there, her dad Hulk Hogan suffering from a bad back, and performing at Calle Ocho 2009 on March 15th.

Brooke Hogan Returns To The Stage At Calle Ocho

Brooke Hogan updated fans on her blog at MySpace (@brookehogan) on Tuesday (February 24), talking about her first performance in awhile in Miami next month. The reality star and pop singer tells readers:

’09 feels good!!! Got my first performance this year right in my home MIA! Its Power 96’s big event called “Calle Ocho” on March 15th! Come see me and help me get over my first performance jitters! The more the better! Small crowds scare me! LOL I’ll of course be performing the ol’ standard “About Us,” my new song with Stack$ called “Falling,” and a super new sexed up “Strip.” Can’t wait to see what we do with the Choreography for that one! LOL ;) I’m holding auditions in Miami next Thursday on the 5th and I’ll be in rehearsals till the show! For you dancers, I’ll post more info soon! check Glenn’s page out for more updates too! Anyway, I’m vibin high and gettin ready to pump out this next album for y’all! Love you guys and I’ll see you at “CALLE OCHO!” 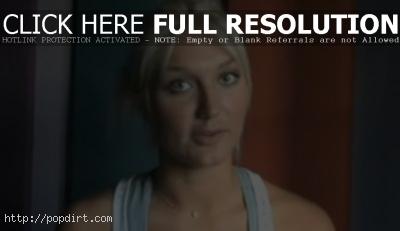 Brooke Hogan is asking fans for help in providing a title to her new album, joking about how she was making some sexual innuendo in the process.

“You guys have watched me on the TV show,” she said. “You guys have seem me basically throw up in front of the cameras. You know be backwards, forwards, and inside out… actually not inside out. But let me know what you think.”

Brooke Hogan checked in with fans on her blog at MySpace (@brookehoganmusic) on Wednesday (December 24). The pop singer and reality TV star tells readers:

Merry Christmas and Happy New Year everyone! Be safe this holiday season and remember to give thanks for all of the things God has given you! May he bless and protect each and every one of you! This year is going to be awesome!

Brooke Hogan wished everyone a Happy Holidays and talked about the new season of ‘Brooke Knows Best’ in a video clip at the pop singer/reality star’s MySpace TV channel. Brooke said she has all her Christmas shopping done, has been in the studio almost every night working on her album, which she says is almost done. Hogan says the new season should be starting in about May, which is the same time as her new album is released.

“We’re getting everything geared up,” she said. “Kind of had a little bit of a lull with the whole family thing and everything. But, since stuff is smoothing out, we can actually start doing music and the show and getting back on track.”

Video from MySpace can be viewed below.

Brooke Hogan was spotted hugging her brother Nick following his released from jail on Tuesday (October 21) after serving 166 days of an eight-month sentence for a reckless driving charge. Watch a report from WFLA’s Chip Osowski below.

Brooke Hogan Excited For Nick’s Release From Jail On Tuesday

Brooke Hogan updated fans on her blog at MySpace on Monday (October 20) as the pop singer’s brother Nick Hogan is prepared to be released from jail on Tuesday. Nick, 18, has been serving eight months in jail after pleading no contest to reckless driving charges stemming from an car crash in August 2007 that left his best friend, John Graziano, in critical condition. Brooke writes:

Hey you guys…as you all know, my brothers gettin out tomorrow…I can’t even tell you, as a sister, how exciting this is for me! Nick and I are like best friends… and I can’t believe how long I’ve gone without him… Not seeing him for 6 months has been really really hard. He always knows how to make me feel better or make me smile when I need it, and it’s been tough without having him there to hug me just at the right time, or crack a joke when im havin a bad day.

There have been a lot of supporters and a lot of haters that have come up to me and said things that have helped and things that made me feel like I couldn’t make it through another day… Some people wish terrible terrible things on us and say the the most nasty comments that I can’t even repeat on here… It really hurts. I understand people have their own opinion, but most of the people that come up to us don’t know the whole story, or how much we really really love John. It’s really sad, because were not bad people… We’re just going through a really hard time, and so is John’s family. I feel sorry for the people who are misinformed because all they have to go off of is the media, which let’s just face it, is NEVER a reliable source. Even the news, when that should be the most accurate… It’s probably the most far off.

UsMagazine.com hears Brooke Hogan turned down an offer to pose nude in Playboy magazine after the singer was approached back in July to do a spread. “Brooke just didn’t feel that it was the right time,” the 20-year-old’s rep explained. “It’s not out of the question for the future, but we’ll have to see.”

Amy Macdonald, who performs on ‘The Late Late Show with Craig Ferguson’ (CBS) on Monday and ‘The Ellen DeGeneres Show’ (Syndicated) on Friday.

Jewel, who performs on ‘The Early Show’ (CBS) on Monday and ‘Today’ (NBC) on Tuesday.

Lance Bass, who competes on ‘Dancing with the Stars’ (ABC) on Monday and Tuesday and visits ‘The Ellen DeGeneres Show’ (Syndicated) on Monday.

Josh Kelley, who performs on ‘The Bonnie Hunt Show’ (Syndicated) on Tuesday.

Ben Folds, who performs on ‘Late Night with Conan O’Brien’ (NBC) on Thursday.

Cut Copy, who perform on ‘Last Call with Carson Daly’ (NBC) on Thursday.