In celebration of Mother’s Day, Australian pop star Candice Alley showed off the 7-month-old children Charlize and Jagger she shares with former Olympic swimming champion Grant Hackett. “It’s a life change for the better,” Candice told the Herald Sun. “Motherhood is what I expected, but what I didn’t expect was how in love with them I would be. I just love the way they interact and watching them when they don’t know I’m there.” Read more and check out pictures of mother with the babies at HeraldSun.com.au.

The following message was posted at Candice Alley’s blog at MySpace (@candicealleymusic) yesterday:

SayWhatNews.com caught up with Candice Alley for a Q&A, where the Australian singer talked about her move from Universal Music Group on her debut album ‘Colorblind’ to the indie label International Quarterback for her self-titled sophomore effort. “I think being with a major label was great, however some changes within the company went on, so I felt it was best to part ways,” Alley said. “Being an independent artist certainly has its challenges, however I feel lucky I’ve been able to call the shots on this album and create something that I’ve always wanted.” Read more.

Candice Alley ‘Before You Go’ Video 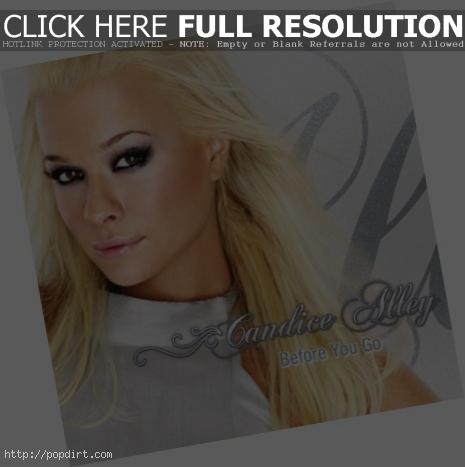 Candice Alley is out with the music video to her new single ‘Before You Go’, off the Australian pop singer’s upcoming second album. Watch it below.

Candice Alley will be opening for Enrique Iglesias during his upcoming Australian Tour. The tour includes Brisbane, Sydney, Melbourne, Adelaide and Perth. The singer’s official newsletter says Candice looks forward to playing for all her fans. Read on for the tour dates.

END_OF_DOCUMENT_TOKEN_TO_BE_REPLACED

20-year-old pop newcomer Candice Alley only just found out she will open the 2003 ARIA Awards with her performance on Tuesday. As she rehearsed her Top 5 hit ‘Falling’ yesterday afternoon, Alley was the consummate professional, impressing organizers with her calm confidence. “I figure it’s a bonus,” the first-time nominee told The Daily Telegraph.