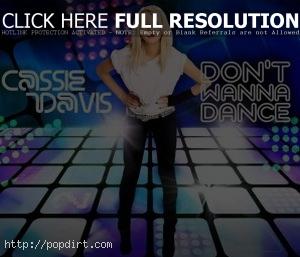 Cassie Davis is out with the music video to her new single ‘Don’t Wanna Dance’, the fifth release from the Australian pop singer’s debut album ‘Differently’, out now on Sony BMG. The single is out April 9th in Australia. Watch the Laura Dudgeon directed video below.

Behind the scenes footage on the set of Cassie Davis’ music video for her new single ‘Don’t Wanna Dance’ has been posted online. The song is the fifth single off the Australian pop singer’s debut album ‘Differently’.

“Hey everyone, we are on the set of my new video, well it’s a new video and a new single, it’s called ‘Don’t Wanna Dance’,” Cassie said. “Somehow, I don’t know how they do it, but they make it look like the camera is going in an arc.”

The directory Laura described the video plan saying, “We’re playing with something a little bit fun. We’ve got these flip cameras, which are these really tiny little video cameras. We have a whole bunch of them and we’re setting them up in a couple of different setups. What we do is take a whole bunch of frames. A couple of frames from each camera and cut them together in edit, and it’s gonna create quite an interesting effect.” 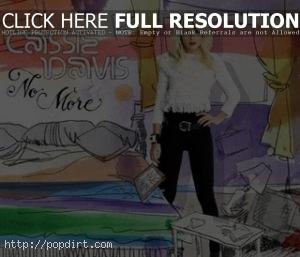 Cassie Davis is out with the video to her new single ‘No More’, the fourth release from the Australian pop singer’s debut album ‘Differently’, out now on Sony Music/12 Stones. The Toby Angwin directed video was shot in Melbourne and stars Nacho Pop from the Australian version of ‘So You Think You Can Dance’. Watch it below.

Cassie Davis posted a new video working in the studio with Printz Board on her debut album’s title track ‘Differently’. The Australian pop singer is also seen trying – and failing – to play the trumpet before showing off the view from the balcony of her temporary Los Angeles abode.

Cassie Davis checked in with fans with a MySpace Video clip, talking about next Friday’s release of her debut album ‘Differently’ in Australia.

“So my album is coming out next week, Friday the 14th of August, so I’m pretty excited, a little bit nervous as well,” Davis says. “It should be good. Some of you know I’m very impatient so I’ve already uploaded the whole album on MySpace for an exclusive preview so if you guys want to go over there and check it out, you can see it before anyone else does. Hope you enjoy it and I’ll speak to you again soon.”

The 23-year-old uploaded the album on her YouTube ahead of the release. Watch the video below.

Cassie Davis posted footage from the studio working on the track ‘Don’t Wanna Dance’, where the Australian pop singer improvised a shaker using rice and a plastic container.

“It’s really simple but I think it’s effective,” Cassie said about the ‘Don’t Wanna Dance’ beat. “It’s stuck in my head for ages.”

Needing another sound to the song’s arsenal, Cassie said, “I need a shaker, but I don’t have one. We’re gonna go make one out of, I don’t know yet. Rice, that’s a good idea. Rice and an empty bottle, or something. Let’s go into the kitchen.”

Watch the video, featuring a brief clip from the song and Cassie munching on Pods, below.

Cassie Davis ‘Do It Again’ Video 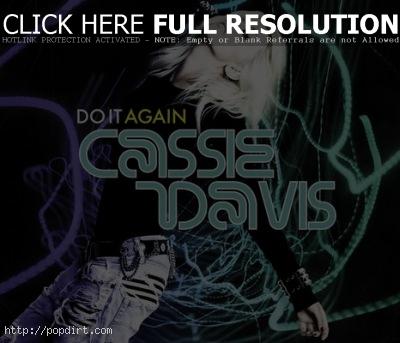 Cassie Davis is out with the music video to her new single ‘Do It Again’, the third release off the Australian pop singer’s debut album ‘Differently’, out August 14th via Sony Music/12 Stones. Watch it below.

Cassie Davis ‘Do It Again’ Video Behind The Scenes

Cassie Davis posted some behind the scenes footage from the ‘Do It Again’ music video shoot at Fox Studios in Sydney, Australia on July 2nd. ‘Do It Again’ is the third single off the Australian pop singer’s upcoming debut album ‘Differently’, due out August 14th on 12 Stones/Sony BMG.

“We are on the set of my brand new video called ‘Do It Again’,” Cassie says in the clip. “So come and check it out.”

Cassie Davis Recording ‘Do It Again’ In The Studio

Cassie Davis checked in from the studio while working on new track called ‘Do It Again’. After a minute of the finished product was played, the Australian pop singer talked about the inspiration behind the song. Watch via YouTube below.

Cassie Davis answered questions from fans on her MySpace and Facebook pages in a video clip at her YouTube channel. The Australian pop singer says her favorite song at the moment is ‘Day-N-Nite’ by Kid Cudi, she isn’t a good dancer, her album will be released in July and she hopes there will be a tour in support of her debut effort. Watch the clip, which also includes a marriage proposal, below.