Catherine Feeny updated fans on her blog at MySpace (@catherinefeeny) on Saturday (March 7), talking about the status of her third album. The Portland, Oregon based singer songwriter tells readers:

Lots of people on the Robyn Hitchcock tour asked about my new album, and why it’s not out yet, and when it will be out, etc. etc… I wanted to explain a bit about what’s going on, what has gone on and what will be going on…

The record has been mainly done for quite a while now. I was super anxious to get it out quickly when we finished it… it is so exciting for people to hear the new work that you are doing, the new discoveries you’ve made, the ideas and sounds you’re exploring. I have been pretty fortunate so far, but this is a symptom of what is wrong with the music business — I know folks who have been signed to major labels for 2 years and not had an album released. Constipation does not promote creativity.

Though they had nothing to do with the making of the record, I was signed to EMI when I finished the record, so they had the option to put it out. I delivered 12 or so tracks, none of which they’d paid for, and they liked what they heard but wanted more tracks. Then they were acquired and the people that I worked with began to be laid off. My manager and I pushed the folks in charge to let us know if they’d be putting out the record, and they said, “No.” 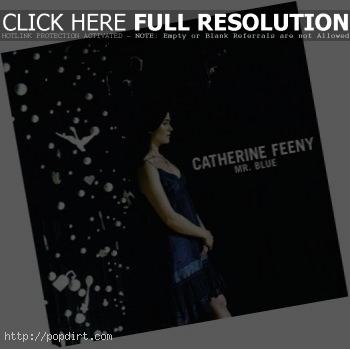 Catherine Feeny is out with the music video to her new single ‘Mr Blue’, from the Philadelphia, Pennsylvania singer songwriter’s album ‘Hurricane Glass’. Watch it below.

Tipped for huge success, Catherine Feeny’s album ‘Hurricane Glass’ is out in May on Angel Records. Influenced by a variety of genres and artists including Joni Mitchell, The Smiths, PJ Harvey, Sonic Youth and Sinead O’Connor, Catherine’s musical tastes have clearly encouraged her own folk/pop style. “I’ve always loved a well-written song,” she comments. “When I’m in the zone, writing is the most satisfying thing in the world. It can be so magical.” Catherine begins her UK tour on Friday 9th March at The Spitz in London. To find out more and to hear some of her tracks, visit myspace.com/catherinefeeny.