Chris Sligh And Session Guys Check In From The Studio

Then, tongue firmly in cheek, Chris predicted, “Judging from the initial response of the session guys who have been playing around on records for years, I gotta say that I think this record’s gonna be huge, maybe 10 million. That’s my guess, maybe 10 million, at least 7 million. We were talking about numbers today, and Michael Jackson sold 104 million records worldwide on ‘Thriller’, and all I gotta say is Jacko, I’m comin for you baby.”

TMZ has obtained video of ‘American Idol’ castoff, curly-haired Chris Sligh, in his first performance since being booted off the show. Watch a clip from his ‘Fro Patro Homecoming Tour’ in his hometown of Greenville, South Carolina below the cut. END_OF_DOCUMENT_TOKEN_TO_BE_REPLACED

‘American Idol’ castoff Chris Sligh updated a blog posting that many took as critical of fellow ‘Idol’ castoff Sanjaya Malakar. “My recent blog post about Sanjaya seemed to get a lot of people up in arms,” Sligh writes at frommymindtoyoureyes. “Though the post is now posted all over the internet, I have decided to remove it from here and I will say this: my intent was never to say anything disrespectful about Sanjaya – those of you who have said it: you are right, I shouldn’t have said that he was annoying…it was poor taste on my part. I also shouldn’t have pointed out my opinion of his voice, though let’s get this straight I NEVER said anything negative about his voice. Sanjaya made the top 24 out of over 100,000 people, and I made it clear that I always thought he deserved to be there. Me saying that 23 people had better voices is in no way negative – negative would’ve been to say that Sanjaya sucks and he can’t carry a tune (I do not think either of those things, I am making a point). However, it was in bad taste and I should’ve known that it would be spun as me being negative, and I was naive to think any differently. So I take full responsibility and apologize sincerely for the original post.”

Ousted ‘American Idol’ finalist Chris Sligh was on the phone with the Jeff & Jer Showgram show on Star 94.1 FM in San Diego on Wednesday (April 4) to discuss his experience on the show, why he thought he got the hook, never setting his sights on winning ‘Idol’, why he stopped being funny, and more.

Ousted ‘American Idol’ finalist Chris Sligh was on the phone with KISS FM in Seattle on Wednesday (April 4). Chris had just returned home and discussed his adventure in Los Angeles, quitting his job at a marketing firm, getting to be part of the ‘Idol’ tour, the shock of Sanjaya Malakar doing well, the ‘Idol’ contract restrictions on signing a record deal, his special kissing technique, and more. The interview audio at kiss1061.com has since been removed. 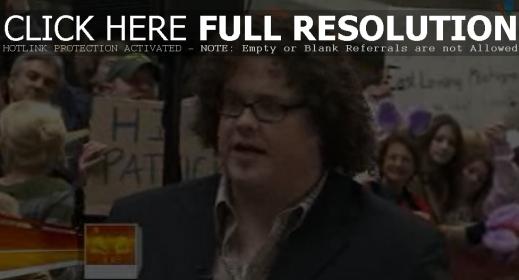 ‘American Idol’ castoff Chris Sligh dropped by ‘Today’ on Tuesday (April 3) to discuss his experience on the show with co-host Matt Lauer.

Video of the interview at Bing.com has since been removed.

Chris Sligh called in to Ryan Seacrest of KIIS FM in Los Angeles on Thursday (March 29) to provide a recap getting kicked off ‘American Idol’ last night and why he threw down the mic to end his performance – which didn’t make it on television.

With Chris Sligh getting the boot from ‘American Idol’ on Wednesday night, speculation is in overdrive that his “Hi Dave” shout-out last week, which was edited out of the UK airing of the show, was the reason he was so coldly treated by the judges on Tuesday and was sent packing. The innocent greeting apparently was Chris answering the call to acknowledge he was a reader of VoteForTheWorst.com, which is run by Dave Della Terza – though some think it was actually for David Hasselhoff – who Sligh in his audition said he wanted to make cry. An argument against the conspiracy on the voting side was DialIdol.com nailing the bottom two – Chris and Haley Scarnato. Check out more details from BuddyTV.

March 28, 2007 – Ousted ‘American Idol’ finalist Stephanie Edwards was on the phone with Johnjay and Rich of 104.7 KISS in Phoenix on Tuesday (March 27). She talked about the shock of getting booted, how each contestant develops a loyal fanbase, the other “famous” Stephanie Edwards who does Albertson’s voiceovers, still being under the ‘Idol’ contract, and her thoughts on Phoenix girl Jordin Sparks. The interview audio at johnjayandrich.1047kissfm.com has since been removed.

March 23, 2007 – Us Weekly’s Us TV caught up with ‘American Idol’ host Ryan Seacrest, who talked about liking high energy ‘Idol’ performers, his favorites this season, and the show’s charity drive. Veoh.com has since removed the video.

Sanjaya Is Staying Alive On ‘Idol’

March 23, 2007 – Jay Leno joked during his Tonight Show monologue on Thursday night, “Hey, did you watch ‘American Idol’ last night? You see that? Yeah. That Sanjaya, he’s still on. He’s still on. You know, Sanjaya is an ancient Indian name that means William Hung. Did you know that?”

March 21, 2007 – Richard Rushfield of the Los Angeles Times has more details on that girl who was crying continuously during Tuesday night’s ‘American Idol’ performances. Ashley Ferl, aged 13, from Riverside, California, was discovered by ‘Idol’ show producers after she was seen sobbing during the show’s rehearsals after they she attended a taping of ‘Smarter Than a 5th Grader’ with her mother. The producers saw the opportunity to strategically place Ferl up front and have a camera isolated on her to take advantage of the waterworks.

Will ‘Idol’ Make Sure Sanjaya Won’t Survive For Tour?

March 21, 2007 – Jonann Brady of ABC News profiled the surprising success of Sanjaya Malakar as the ‘American Idol’ finalist could actually wind up on the ‘Idol’ tour if he survives tonight’s vote results. But while VotefortheWorst.com’s Dave Della Terza has thrown his support towards the 17-year-old, he’s not so certain it will work out. “My prediction is that Sanjaya will probably go home this week because the producers don’t want him on the tour,” he said. “Will Sanjaya get the least amount of votes this week? I don’t know. I think the producers are working overtime backstage to make sure Sanjaya is the one who will go home any way they can.” Read more.