MyKindaPlace.com caught up with the girls from Clea, who formed as the losing group from ‘Popstars The Rivals’ after coming in behind Girls Aloud. Asked how they became a group after being runners-up, Lynsey responded, “We’d decided we wanted to become a group before the last Popstars show. Girls Aloud were picked, Javine [Hylton] did her solo thing and here we are!” And when asked about their favorite artists of the moment, Chloe cited *NSYNC star Justin Timberlake and Christina Aguilera. “I like what Christina’s been doing, it’s very cool and sassy,” Chloe said. “And Justin, but that goes without saying!”

‘Popstars: The Rivals’ group Clea admit they thought their chance of fame was history after being dumped out of the TV talent show just over a year ago in favor of Girls Aloud, but they instead banded together and have are set to release their second single ‘Stuck In The Middle’ on February 7th. ”When I didn’t make it into Girls Aloud, I thought my chance of a career might be over, but the calls were coming in from record companies andthat boosted my confidence,” band member Emma said. “‘Popstars: The Rivals’ seemed like the only chance for us to be in a girl group. It seemed like the end. But we picked ourselves up and now I wonder what all the fuss was about. We got exposure in front of millions of people on TV every week and, in the end, it didn’t matter whether we won or lost. I think Liberty X had proved that and deep down we must have known that but during the show we just wanted to get to the end and be chosen for Girls Aloud.”

Clea ‘Stuck In The Middle’ Video 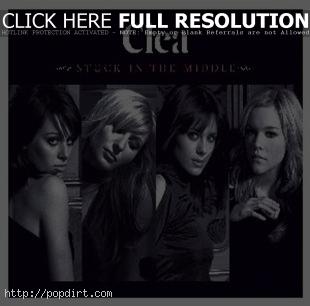 Clea are out with the music video to their new single ‘Stuck in the Middle’, which will be released next month in the UK. Watch it via YouTube below.

After losing out on ‘Popstars: The Rivals’, Clea tell the Sunday Mail they hope to follow in the footsteps of Liberty X and Girls Aloud rather than reality TV failures, One True Voice and Hear’Say. “We’re quite confident we’re not going to go down the same path as Hear’Say and One True Voice,” group member Aimee Kearsley said. “They were just too controlled, too manufactured. We are very much in control of Clea. We have a lot of say in the music, the look, the style, even down to choreography.”