This week’s episode of Clique Girlz TV features the teen pop trio primping in hair and makeup as they prep for their photo shoot in Tokyo, Japan. Paris, Destinee and Ariel have come a long way from their hometown of Atlantic City, NJ as they rock some funky outfits and fool around with silly poses on the other side of the globe. Listen up for their track ‘The Difference’ throughout the video clip via YouTube below.

How Clique Girlz Got Their Name 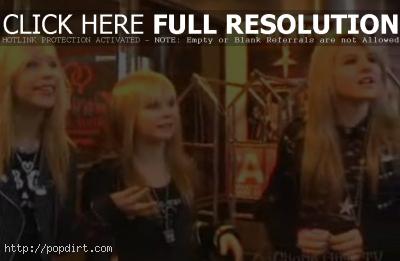 September 11, 2008 – Paris and Destinee Monroe and Ariel Moore wrapped up their trip to New York City in Episode 16 of Clique Girlz TV. Watch the pop trio make stops at NBC’s ‘Today’ show and Sirius Satellite Radio and find out how they got the name “Clique Girlz.”

Destinee said, “Well, we all just pretty much clicked with each other, and my mom, when we were having a sleepover, my mom started typing all these names for the group and stuff, and out of hundreds of names, three pages long the last one was clique.”

Stay tuned for next week when the girls head to Japan. Watch the episode via YouTube below.

Clique Girlz Watch ‘Not Too Young’ Get Mixed

August 13, 2008 – Clique Girlz TV episode twelve features the female pop trio at the mixing their debut album ‘Not Too Young’. After trying their hand at the sound board and miming a few of their tracks, youngest member Paris Monroe promised, “This album is gonna rock so hard!” Next week features the girls at the Gravity Fitness & Spa in New York City. Watch the episode via YouTube below.

August 6, 2008 – Clique Girlz TV episode 11 features the pop trio going to acting lessons before heading to their label, Interscope Records, in Santa Monica. The girls went on the balcony to check out the foggy view and watch youngest member Paris Monroe make some silly faces. The episode ends with a preview of next week’s clip, where the girls observe the mixing of their debut record ‘Not Too Young’, coming out next Tuesday. Watch it via YouTube below.

Clique Girlz Phone In An Update

August 2, 2008 – Paris, Destinee and Ariel of Clique Girlz left Tommy2.net a message about their performance at the Teen Choice Awards pre-party, their upcoming trip to Japan, and the release of their debut album in Japan and America. Listen to the clip at tommy2.net.

Clique Girlz TV episode ten features the pop trio getting a haircut at the Beverly Hills salon of famed hairstylist Jose Eber. After chatting with Jose, the girls talked about the styles they were going to get before showing off the final results. The clip ends with a preview of next week’s episode – acting lessons for the girls. Watch it via YouTube below.

June 18, 2008 – The Clique Girlz visited the ‘Today’ show on Tuesday (June 17), where they spoke with co-host Ann Curry about how they started the pop group and recording their debut album before performing their first single, the disc’s title track ‘Incredible’. Watch the brief interview and performance below.

June 18, 2008 – The Clique Girlz dropped by ABC News Now, where the pop trio talked about how they got their start, making the finishing touches on their debut album ‘Incredible’, their amazing time opening up for the Jonas Brothers, what they like to do when they’re not performing, loving to be in California now after growing up in New Jersey, not liking to wake up early, and their new tour opening for Drake Bell. The interview video at abcnews.go.com has since been removed.

Cyndi Lauper, who performs on ‘The View’ on Monday.

Katy Perry, who performs on ‘Last Call with Carson Daly’ on Monday.

Clique Girlz, who perform on ‘Today’ on Tuesday.

Gavin DeGraw, who performs on ‘Last Call’ on Tuesday.

Jewel, who performs on ‘The Tonight Show with Jay Leno’ on Tuesday and ‘Jimmy Kimmel Live’ on Wednesday.

Idina Menzel, who performs on ‘Live with Regis and Kelly’ on Tuesday.

The Clique Girlz On The ‘The Difference In Me’ Video Set

YoungHollywood.com caught up with sisters Paris and Destinee Monroe and Ariel Moore of The Clique Girlz on the set of their music video for ‘The Difference In Me’, where they talked about the video’s concept, plans to call their debut album ‘Not Too Young’, a pop rock sound on the disc, and how they got signed to Interscope Records.

“This one we are doing this whole room where we’re sitting down and we have a performance and then we’re like tracing our fingers with the lyrics of the song, and it’s gonna be coming up on all the walls,” Destinee said about the music video concept. “Then after the whole room is covered in all of the lyrics the walls are eventually going to fall down.”

“We’ve been out here a year and a half now, and we came here for three days and had a meeting with Interscope Records and never left,” Paris said about the group’s visit to Hollywood.

One minute clips of the ‘Bratz’ soundtrack are available ahead of the album’s July 31st release. Bratz: The Movie in theatres August 3rd. Audio clips at popgeneration.com have since been removed. Check out artwork, photos, and stills at totalassault.com. The track listing is as follows:

7. It’s All About Me – Chelsea Staub (In The Role of Meredith)

14. It Doesn’t Get Better Than This – Alex Band

19. If This Is Goodbye – Lifehouse

20. Fabulous – Chelsea Staub (In the Role of Meredith)