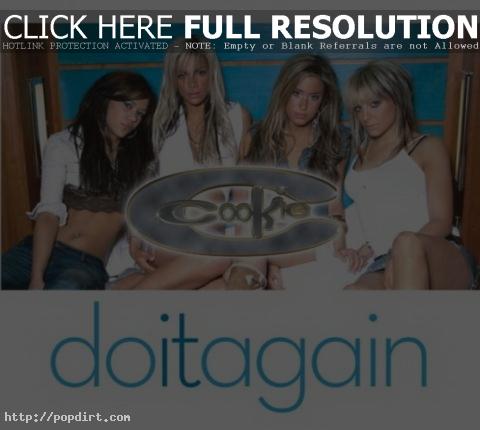 With Cookie losing Nicola and replacing her with Amy, the girl group has a new version of their debut video ‘Do It Again’. Watch it online at YouTube.

The Sunday Mirror reports that Girls Aloud and their touring support act Cookie fled to their rooms as armed police swarmed over the exclusive Radisson SAS in Liverpool. Then, as they cowered inside, CS gas filled the corridor, and they heard “gunshots.” Sarah Harding said afterwards, “It was terrifying. There were police everywhere. We didn’t know what was going on because there were so many police around.”

A posting from ‘The Management’ at Cookie’s official website confirmed Thursday that Nicola is out of the girl group, who are currently on tour with Girls Aloud. “The message board has some news that Nicola did not perform with Cookie in Manchester last night,” the posting stated. “We can confirm this to be true, and that Nicola has moved on from the group. This decision was not made quickly and MUCH thought had gone into this, but PERSONAL differences and situations behind the scenes forced us (The Management) to look for a possible replacement for Nicola. THE OTHER Cookie GIRLS as you know are on tour and were completely unaware OF what was happening.”

Cookie are out with the video to their debut single ‘Do It Again’. Watch it online at YouTube.