Justin Bieber, Nicole Scherzinger, Janet Jackson, Miley Cyrus, Enrique Iglesias, Adam Levine, Pink, Celine Dion, Orianthi, Jonas Brothers, Fergie, Katharine McPhee, Jason Mraz and Jordin Sparks were among the stars who participated in a recording of the remake of the 1985 charity single ‘We Are The World’, written by Lionel Richie and the late Michael Jackson.

Watch ‘We Are The World 25 For Haiti’ via YouTube below.

Fergie and her husband Josh Duhamel attended the 52nd Annual Grammy Awards at the Staples Center in Los Angeles on Sunday (January 31). The Black Eyed Peas singer and her bandmates took home Grammy awards for Best Pop Performance by a Duo or Group with ‘I Gotta Feeling’, Best Pop Vocal Album and Best Music Video for ‘Boom Boom Pow’. Check out pictures from zimbio.com.

Fergie looked trendy as she arrived to Nice airport to catch a departing flight on Sunday (January 24), a day after the Black Eyed Peas attended the NRJ Music Awards in Cannes.

Fergie admitted the unthinkable the other night – she’s a TMZ fan. The show’s cameras spotted the Black Eyed peas singer at JFK Airport in New York City, offering a shout out to “I’m a lawyer” Harvey Levin, prompting him to get “a little starstruck.” The video report from TMZ at MySpace has since been removed.

Fergie presented her speech about being a long-time Miami Dolphins fan and becoming a minority owner of the team during former Miami Dolphins Coach Don Shula’s 80th birthday party celebration at Land Shark Stadium in Miami, Florida on January 2nd.

“My favorite NFL team has always been the Miami Dolphins,” the Black Eyed Peas singer said. “I’m proud to say, as of this week I still have the bragging rights of loving the only undefeated team in the history of the NFL. Thank you 1972 team and Coach Shula.”

Watch footage of Fergie singing happy birthday, giving a speech, and doing a special performance of ‘Boom Boom Pow’ below. 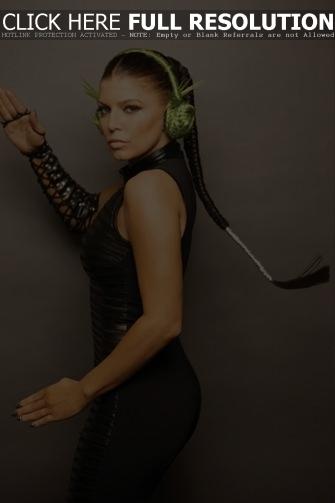 Fergie from the Black Eyes Peas was on the phone with Mack at Nite on Y100 in Miami, where she talked about the new track ‘Imma Be’, the holidays, prison names, having female groupies before she got married to Josh Duhamel, believing Tiger Woods could be helped by therapy since it worked for her, the new movie she’s in ‘Nine’, how to deal with rumors, and how the internet has gotten crazy of late.

The 2-part interview at y100.com has since been removed.

TckTckTck is out with a video for their campaign song, a re-mix of the Midnight Oil hit ‘Beds are Burning’. Over 60 international music stars and celebrities including Duran Duran, Mark Ronson, Jamie Cullum, Fergie, Lily Allen, Serena Ryder, Ane Brun contributed to the song and video. Join the campaign for climate change and become a Climate Ally by downloading ‘Beds are Burning’ for free at timeforclimatejustice.org. Watch the video below.

Wearing a black tank top and blue jeans, Fergie of the Black Eyed Peas was photographed in Paris as the hip hop group continued promoting their latest album ‘The E.N.D.’ on Wednesday (May 27). Check out pictures from X17.

Fergie Wears Her Sunglasses At Night

Fergie of the Black Eyed Peas was wearing her sunglasses as night as she prepared for departure from Los Angeles International Airport on Monday (May 11). Check out pictures from Daily Mail.

Fergie nearly flashed her derriere to perverted paparazzi on Tuesday (April 14) as the Black Eyed Peas star headed up the stairs into a medical building in Beverly Hills. Afterwards, the singer’s assistant picked her up in a silver Porsche. Check out pictures from Evil Beet Gossip.