Fergie For Kipling Handbag Collection On Myspace’s ‘The Fit’ 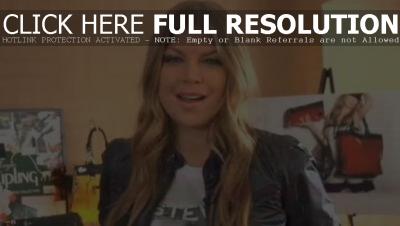 Fergie of the Black Eyed Peas offered MySpace’s ‘The Fit’ a first look at her ‘Fergie for Kipling’ handbag collection. “It’s gotten a little bit more elegant over the years,” Fergie said of her style. “As I mature and get older, I’m feeling more comfortable in taylored things and suits and longer skirts. So I think I’m trying to age gracefully.” Watch the episode below.

Ashlee Simpson, who performs on ‘The Tonight Show with Jay Leno’ on Monday and ‘The Ellen DeGeneres Show’ and ‘Jimmy Kimmel Live’ on Thursday.

Goldfrapp, who perform on ‘The Tonight Show’ on Tuesday.

Kat DeLuna, who performs on ‘Live with Regis and Kelly’ on Tuesday.

Tegan and Sara, who perform on ‘The Tonight Show’ on Wednesday.

Prince, who performs on ‘The Tonight Show’ on Friday.

Kate Nash, who performs on ‘The View’ on Friday.

Mariah Carey, who performs on ‘Live with Regis and Kelly’ on Friday.

‘American Idol’ castoff Michael Johns, who visits ‘Live with Regis and Kelly’ on Monday and ‘The Ellen DeGeneres Show’ on Friday.

Heidi Montag of ‘The Hills’, who visits ‘Total Request Live’ on Monday and ‘Live with Regis and Kelly’ on Wednesday.

Mariah Carey, who visits ‘The Oprah Winfrey Show’ on Monday, mentors the ‘American Idol’ finalists on Tuesday, and performs on ‘Idol’ on Wednesday.

Ingrid Michaelson, who performs on ‘The Tonight Show with Jay Leno’ on Tuesday.

Jordin Sparks, who performs on ‘Live with Regis and Kelly’ on Tuesday.

Naked Brothers Band, who perform on the ‘Today’ show on Tuesday.

Fergie of the Black Eyed Peas, who visits ‘Live with Regis and Kelly’ on Thursday.

Ashlee Simpson, who visits ‘TRL’ on Thursday and performs on ‘Today’ on Friday.

Pregnant Fergie Rushing To The Altar With Josh Duhamel?

The New York Post hears that Fergie is pregnant and that the Black Eyed Peas star is moving up her wedding date with actor Josh Duhamel as a result. The singer attended Clive Davis’ pre-Grammys bash at the Beverly Hilton and was behaving like a woman expecting. “She picked up a wedding dress while she was in New York for Fashion Week and wants to move the wedding up so she is married before the bump becomes too obvious,” an insider explained. “At Clive’s, she just drank water.”

Sheryl Crow, who performs on ‘The Late Show with David Letterman’ and ‘The View’ on Tuesday.

Fergie of the Black Eyed Peas, who visits ‘Total Request Live’ on Tuesday and ‘The View’ on Wednesday.

Kate Voegele, who visits ‘The Sauce’ on Tuesday.

Paula Abdul, who visits ‘The Late Show’ on Wednesday.

A Fine Frenzy, who performs on ‘The Late Show’ on Wednesday.

Paris Hilton, who visits ‘The Ellen DeGeneres Show’ on Friday.

Enrique Iglesias, who performs on ‘The Tonight Show with Jay Leno’ on Friday (artist announced).

The Associated Press reports Josh Duhamel’s representative said Wednesday the ‘Las Vegas’ actor recently proposed to to his longtime girlfriend Fergie of the Black Eyed Peas. Stacy Ann Ferguson, 32, and Duhamel, 35, have been dating for about three years and have bought a house together.

Black Eyed Peas star Fergie and boyfriend Josh Duhamel only had eyes for each other at John Mayer’s December 8th show at the Nokia Theatre in Los Angeles, an attendee tells OK! magazine. “They were dancing, hugging, holding hands and just having a sensational time,” the witness told the mag. “They’re so comfortable with each other they didn’t even care when fans recognized them and asked for photos and autographs.” Read more.

Fergie of the Black Eyed Peas offered a profound Christmas gift – giving young girls with life-threatening illnesses a well deserved escape from the hospital with a $500 shopping spree at Kohl’s in Los Angeles for each one of them. ‘Access Hollywood’ was there to capture the gift giving. “I remember when I was younger, and getting something like this would have been such a huge deal,” the 32-year-old told the show. Video at accesshollywood.com has since been removed.

Celebrities talked with CNN about how they will be spending their Thanksgiving holiday. Fergie of the Black Eyed Peas said her family is coming over as she and boyfriend Josh Duhamel are hosting dinner today, but she’s not cooking – Chef Felix is coming over. Watch the segment via CNN.com below. 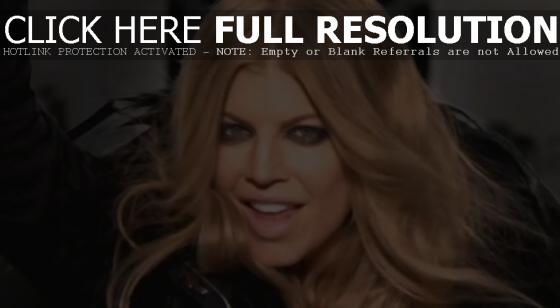 Fergie of the Black Eyed Peas is out with the music video to her new single ‘Clumsy’, the fifth single from her debut solo album ‘The Dutchess’. The song is also featured on the soundtrack to the film ‘Knocked Up’. Watch the Marc Webb and Rich Lee directed video via YouTube below.