Girls Aloud are out with behind the scenes footage from their ‘Something New’ music video shoot, where Cheryl Cole, Nadine Coyle, Sarah Harding, Nicola Roberts and Kimberley Walsh offer their thoughts on doing a music video for the first time since doing ‘Untouchable’ in 2009. ‘Something New’ is one of four new tracks off the British girl group’s greatest hits album ‘Ten’, out November 26th on Fascination.

Kimberley shared, “We’re really excited for everyone to hear the new song. I feel like obviously the fans have been waiting for a while. It’s been three years since I’ve been with the girls on a video shoot. It’s kind of really, really exciting, but nerve-wracking as well. I was 20 when I got in the group and now I’m 30, still trying to keep up. It wouldn’t be Girls Aloud if it wasn’t mayhem.” 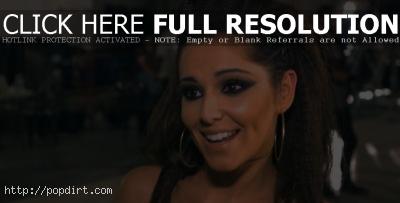 “You know what’s crazy is our nieces and nephews and little brothers were 3, 4 years old when we started, and now they’re teenagers,” Cheryl remarked. “Today we’re on a video shoot for the first time in three years. It feels amazing actually to be all back together. We’ve been talking about this day for so long, now that it’s finally here it feels really exciting and it’s the right time to just go.”

Nicola said, “It actually doesn’t feel like it’s been three years. That’s such a long time really. I was saying to Kimberley earlier that considering how long it’s been since we’ve all been together shooting together on set, it’s not weird at all, really bizarre.”

Sarah commented, “I was really excited to get back in front of the camera. It’s been so long. I just actually get to have it. It’s such a high energy track as well, it really gets you sort of jumping when you listen to it. Fingers crossed it does well.”

“I can’t believe it. I’m in serious denial about this ten year anniversary, although people keep saying no it can’t be. It couldn’t possibly be ten years,” Nadine observed. “Very, very exciting day. It’s been a while since we shot a video together. I love the song, so it’s great to dance and sing it. It feels like we never stopped. I was in LA for a while and it literally feels like six months have passed, and now we’re back doing it again.”

Sarah Harding had a chat with Absolute Radio’s Adrian Hieatt about whether Girls Aloud are going to reform, her favorite films of the year, and her love of the London radio station. “I would like to think so but there’s nothing to confirm,” Harding said when asked if Girls Aloud would be back together next year. “I think it would be great fun. Ten year anniversary, it would be great to do something.” Watch the interview via YouTube below.

Nadine Coyle’s father Niall tells The Mirror that the singer has been getting the cold shoulder from her Girls Aloud bandmates when they visit Los Angeles, where Nadine lives. “When the rest of the girls are in town, they don’t contact Nadine,” Niall explained. “You can understand why she may feel left out. They know where she is and don’t call. I’m not saying she will never go back to Girls Aloud but her life is here now as are her friends, family and her future.” Watch a report from ITN about the news via YouTube below.

Nicola Roberts was spotted leaving The May Fair Hotel in London, England on Monday (April 12). The Daily Star quoted Nicole as saying reports of a feud between Nadine Coyle and her Girls Aloud bandmates were untrue. “I talked to the other girls about it and none of us have heard from her,” she said. “But there’s no feud.”

The People reports Nadine Coyle is in the doghouse with Cheryl Cole and their Girls Aloud bandmates for not offering support for Cheryl and contacting her after splitting up with Ashley Cole. The other girls are especially upset by claims Nadine made that she had contacted Cheryl when she hadn’t. “Cheryl feels completely betrayed by Nadine,” an insider told the Sunday tabloid. “She is hurt that she didn’t hear from her after Ashley’s cheating but she feels even more upset and angry that Nadine came out in public to insist that she had tried to get in touch with her.” Read more.

Girls Aloud star Kimberley Walsh looked ahead to tonight’s Brit Awards, talking with ITN about how the British girl group will be on hand for the event. “We’re up for the best performance, which would be unbelievable,” Walsh said. “Obviously to win something like that, but just to be up there really with the 30 best performances ever is a real achievement. We’re really thrilled about that.” Watch the comments via YouTube below.

Nadine Coyle tells The Mirror she loves Cheryl Cole’s new song, was upset to miss her bandmate’s performance on ‘The X Factor’ and dismissed speculation of a rift when she didn’t bother to visit Cheryl when she was recording ‘3 Words’ in Los Angeles.

“There were all these crazy reports saying I had snubbed her – but we met up and had a great laugh,” Nadine explained. “It isn’t like I go out of the way not to be at anything the girls are doing. If I was still in London I’d be out with them far more often. When we are touring we spend every second together and go out lots, so we make the most of it when we can.”

Kimberley Walsh is the brand new face of New Look for the Autumn, and Girls Aloud’s official web site is offering a behind the scenes peek from the photo shoot, where viewers can see many of the designs which will soon be available. The 27-year-old talked about her love of denim, how she likes to dress it up and down, trying to dress for her shape, liking to swap colors, her fashion during the early days of Girls Aloud, how Jennifer Lopez and Beyonce are her fashion role models, and more.

On favorite types of denim, Walsh said, “I love denim actually. At the moment I’m quite into the sort of denim shirt dress kind of thing. This is a version of it (that I’m wearing). I’ve already got a few different ones. Pale denim. without sleeves, with sleeves. I don’t know, it’s like everyone wants denim but a different way to wear it.”

On how she accessorizes denim, she said, “That’s the beauty of denim really. I think you really can dress a pair of jeans up or down. I think the kind of more skinny jeans tend to be more dressed up for me. I wear them at night and they look good with really high heels. For the day, maybe go with more of a looser fit, so you can be more comfortable as well and maybe get away with some more comfortable shoes.”

On her style in general, Kimberley said, “I think my main aim is just to try and dress for my shape, and not try and dress for the latest fashion if it’s gonna make me look bad. It’s really important to feel comfortable. If you wear something that you really don’t feel right in, it can change your mood. It’s not good.”

Girls Aloud: We Are Definitely NOT Splitting Up

Girls Aloud checked in with fans on their blog at MySpace (@girlsaloud) on Tuesday (July 14), assuring fans that despite branching off to do solo projects, the British girl group aren’t splitting up. They write:

Hope you’re all good and getting ready for summer.

We’ve decided to write this note together, because we want to set the record straight about what is happening in our world.

Over the next twelve months we are all going to be involved in lots of different things – music, TV, fashion and more. Sometimes it may be a solo project – sometimes just a couple of us and sometimes all five of us together.

We are definitely NOT splitting up. In fact we have all signed a new contract with Fascination/Polydor Records guaranteeing that we will release at least another three Girls Aloud albums – minimum. We will definitely all be going into the studio next year to record – and there will definitely be a new GA album in 2010.

For the rest of this year – you’ll have to wait and see, but it will be full of surprises – we promise!

For all the true stories and facts – please stay tune to www.girlsaloud.com.

Thanks for reading this and thanks for your on going support.