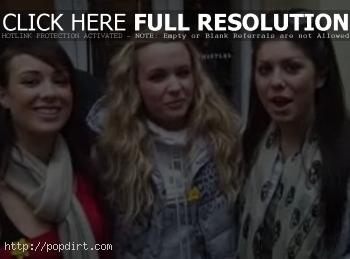 Over the weekend, Daizy Agnew, Phoebe Brown and Jess Stickley of Girls Can’t Catch headed down to Covent Garden to raise money for Marie Curie with their busking skills. Daizy writes on their MySpace (@girlscantcatch):

This Saturday we busked in Covent garden for the Marie Curie charity. I think it’s an underrated charity that deserves all the exposure it can get – the money goes to the nurses who care for those who are in their last months or days of living. It really does take a special kind of person to support and care for someone who is dying, so were honored to be asked and very happy to help raise money and awareness of this cause.

The British girl group posted highlights from the day. It has since been removed.

Megan was thrilled to be invited along to London to meet the girls and left with a leather waistcoat from the new Warehouse collection, chosen for her by her very own stylists for the day… Girls Can’t Catch.

The webisode video has since been removed.

Jess Stickley of Girls Can’t Catch discussed the girl group’s concert that was a homecoming for her at Toko bar in Bournemouth on February 27th. Jess writes on their blog at MySpace (@girlscantcatch):

This weekend was a really special one for me, as, having been on the club tour since January, I finally got to perform in my home town – Bournemouth! We played a club called Toko, and wow – what an experience! I know I’ll never forget the moment when I was up on stage and looked out to see all of my friends and family in the crowd dancing away!

Before we went on stage, the nerves and excitement kicked in – it’s always way more nerve-wracking to play in front of people you know! To get to the stage, we had to walk outside in the rain (which was freezing cold) but then they announced we were on, and we ran in and onto the stage….

Jess Stickley of Girls Can’t Catch blogged about their appearance at Warehouse and their show at Mayhem in Essex on the British girl group’s blog at MySpace (@girlscantcatch) on Friday (February 26). Stickley writes:

On Tuesday night we got the chance to head into London to check out Warehouse’s new Utility collection! We were all really excited and spent the day making plans for what we were going to wear…

Phoebe went for a purple jumper with black leggings, Daizy chose a snakeskin patterned dress and I picked out some gold leggings and high tops! When we got there, there was a mini red carpet outside the store which was really cool and we got photographed – but it was freezing cold outside, so we were glad to get inside quick!

Jess Stickley of Girls Can’t Catch checked in with fans on the British girl group’s blog at MySpace (@girlscantcatch) on Monday (February 8), discussing their experiences on their current mini tour. Jess writes:

Last Friday we continued with our mini-tour, heading to Sheffield University to play at the Octagon. The show turned out to be loads of fun! When we got there we were introduced to Fearne Cotton who would be DJing all night and introducing us on stage! She was really bubbly and even more gorgeous in real life! After that, we bumped into Miss Frank from X-Factor – they were so lovely and we just hung out backstage taking pictures. We also met Lucie Jones from X-Factor who was really friendly and so pretty! We watched Miss Frank perform and they were so good – we all thought they should have got much further on X-Factor because they really do have such amazing, soulful voices!

When it was our turn to perform, the crowd were great and we saw some familiar faces, which always makes the gigs more exciting! :) It was really surreal to have Fearne Cotton behind us on stage with her decks (and some amazing crystal-covered headphones) and we were all buzzing when we came off stage! Bradley and Paul from S Club 7 performed after us, and we saw them as we were leaving the venue, which was so weird, especially for Phoebe and I because we used to LOVE S Club 7 and I remember going to see them on tour!

Daizy Agnew of Girls Can’t Catch blogged about the British girl group’s promotion of ‘Echo’ and how she felt for the song to reach the top 20 in the UK singles chart. Daizy writes on the group’s blog at MySpace (@girlscantcatch):

I’ve realized that I get incredibly stressed out before a single release! Don’t get me wrong, it’s extremely exciting, but VERY nerve-wracking. We’re a very hard working band, and when a single is released our schedule is even more ‘full on’ than usual. I think it’s like queuing up for a ride at a theme park – the anticipation, excitement and nerves before you get on is insane! Once you’re on, the whole experience happens so quickly that when you come off you think ‘Wow, what just happened!’ and of course ‘I want to go again!’

We were gigging all weekend before chart day and on Sunday we found out Radio 1 wanted us to come in for a chat while they were doing their top 40 chart show with Reggie Yates. All the way there we were very excited! When we arrived at R1, there were fans waiting outside, some were for other acts also making their way to R1 and some were for us! 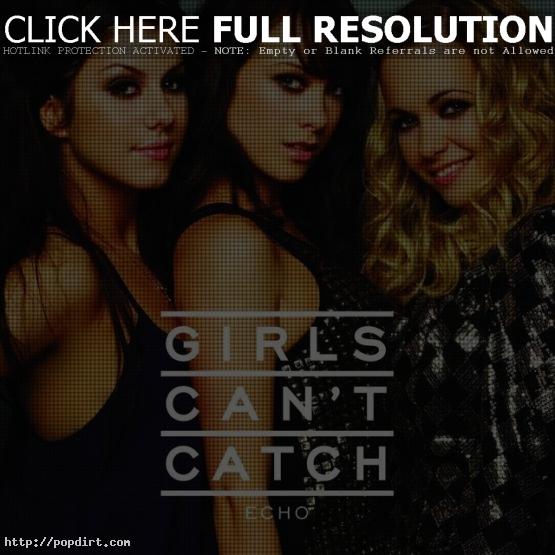 Jess Stickley blogged about the busy week she and her Girls Can’t Catch bandmates had promoting their new single ‘Echo’ on the British girl group’s blog at MySpace (@girlscantcatch) on Thursday (January 14). Jess writes:

So it’s the first proper week back at work since the Christmas break, and wow – what a week it’s been so far! First of all, we had a great day rehearsing for a special acoustic version of Echo, which we spent with our guitarist Marcus helping arrange it! Hopefully you guys will get to see it online and at various places like News Of the World online (but more of that later!)…

Then Wednesday went by in a crazy blur – we saw our lovely hair and make-up team who spent the day with us helping us to look glam. Our first event of the day was performing ‘Echo’ for Teen Nickelodeon, and it was really cool to be back on the set and in their awesome building which painted bright colors and has loads of cartoon pictures around the place! Then we went straight back to Universal for a run of interviews for different magazines/online websites etc. These are always really fun, as it’s great to see which questions we get asked by people!

Girls Can’t Catch are out with behind the scenes footage from the set of their ‘Echo’ music video. Daizy Agnew, Phoebe Brown and Jess Stickley discuss the story behind the song, the director, the choreographer, their outfits, and the process of shooting a video.

Daizy explained in regards to the song, “‘Echo’ is about when you’re in a relationship with somebody and it’s kind of gone dead, but it won’t lie down, and he just won’t talk to you. He won’t really communicate with you anymore. It’s frustrating.”

Jess continued, “Hopefully we portray that in our video, because the director has really been helping us come across in like not desperation, but looking to the camera and pretending that you’re singing to the guy, wanting him, and you’re trying to tell him. Hopefully it will come across that way.”

“This was put together by our stylist Frank,” Jess said about the girls’ wardrobe.

Phoebe said of her outfit, “I love the style I’m in. I’m just wearing a black playsuit, velvet one. Thigh high boots, which are really hard to dance in. They’re really high.”

For her part, Daizy said, “Because the colors are silver and black for this video, they’ve put me in a dress. A bit of metallic on here and some gloves, because gloves is my thing.”

“When I was little, I used to be like, ‘Oh my god, I’d love to make a music video’,” Phoebe said about the video shoot process. “It’s every girl’s dream. It’s very fun.”

Daizy chimed in, “Having makeup, hair, like there’s a whole team of people around you. It’s just exciting all day, it’s just this big buzz.”

“I think the best thing about this video shoot is just the backdrop,” Jess said. “To have that behind us is just so cool.”

Phoebe Brown of Girls Can’t Catch checked in with fans on her blog at MySpace (@girlscantcatch) on Tuesday (January 5), talking about her New Year’s resolutions for 2010, including what she wants to eat less of, eat more of and accomplish over the next 12 months. Phoebe writes:

I hope you all had an amazing Christmas and New Year! For the other girls and I 2009 was incredible and great fun! As for Christmas, we all have big families so it’s never a quiet time!!

I always find it a bit depressing after New Year because Christmas is totally over, which kinda sucks… BUT there’s always something to focus on – your New Year’s resolutions!

Usually I’m really rubbish at keeping them and every year I say ‘I WILL do it this time!!’

Daizy Agnew of Girls Can’t Catch blogged about the British girl group’s recent shopping trip with girls who won a competition the trio held went. Daizy writes at the their blog at MySpace (@girlscantcatch):

We spent a lovely afternoon at Topshop in London with the two competition winners, Hanna and Lieanne, and it turned out to be a really great day!

Phoebe, Jess and myself were waiting in the restaurant for Hannah as arranged, and when she arrived we saw she had brought her little sister Lieanne with her, who had no prior knowledge of what was going on! Once she had recovered from the initial shock of meeting us (I don’t know if that was a good thing or not!) we told her that we had £50 just for her to spend however she liked! As New Year’s eve is fast approaching, our mission was to find a fabulous NYE outfit.