Pop acts on television this week include Janet Jackson, who visits ‘The Tyra Banks Show’ on Monday; Clay Aiken, who visits ‘The Tyra Banks Show’ on Wednesday; Madonna, who is in concert for her Confessions Tour 2-hour special on NBC on Wednesday; Nelly Furtado, who performs on ‘The Tonight Show with Jay Leno’ on Wednesday and Thursday; John Mayer, who performed on ‘The Late Show with David Letterman’ on Thursday; and Ricky Martin, who performs on ‘Live with Regis and Kelly’ on Friday. In addition, the ‘American Music Awards’ on Tuesday on ABC feature performances by No Doubt singer Gwen Stefani, Nelly Furtado, and The Pussycat Dolls, and presenters including Nicole Richie, Ashlee Simpson, Paris Hilton, ‘American Idol’ alumni Katharine McPhee, Taylor Hicks and Clay Aiken, ‘Hannah Montana’ star Miley Cyrus, JC Chasez, JoJo, Jesse McCartney, The Cheetah Girls, and cast members from ‘High School Musical’.

Sources tell Roger Friedman of FoxNews.com Jermaine Dupri is out as head of urban music at Virgin after disappointing sales of his girlfriend Janet Jackson’s comeback album ’20 Y.O.’ Three weeks into its release, the album is a dud with less than 500,000 copies sold. Friedman suggests Dupri’s decision to present the 40-year-old as a hip hop diva is largely to blame. Read more.

October 18, 2006 – ‘RTL Boulevard’ profiled Janet on Monday (October 16), where the singer discussed her new album ’20 Y.O.’ and its “classic Janet” sound and wanting as many children as boyfriend Jermaine Dupri would like to have. Afterwards, there was a panel discussion, in Dutch. The video clip at RTL.nl has since been removed.

October 16, 2006 – The New York Daily News hears Jermaine Dupri is said to be blaming fellow execs at Virgin Records, notably label chairman Jason Flom, for the miserable sales of his girlfriend Janet Jackson’s new CD ’20 Y.O.’ “Jermaine blames Virgin for not getting it enough radio play – not working it,” an insider claimed, adding that the pint sized rapper/producer is threatening to quit as president of the Virgin Urban division. One of Flom’s defenders fired back, “Jason wants the CD to be a hit as much as anyone, but she didn’t have the goods.”

Janet Jackson went apartment hunting in New York City recently and was interested in a 9,000-square-foot crib in a high-rise in Manhattan’s Columbus Circle. She was considering a move there with boyfriend/producer Jermaine Dupri, according to Upscale magazine. Read more.

October 7, 2006 – Janet was on with WBLI in Long Island to talk with Dana DiDonato and Big Randy. They were advised not to talk about the Super Bowl breast flash incident or her brother Michael, and the singer sounded have asleep and provided her usual brief answers reminiscent of Avril Lavigne and t.A.T.u.’s interview skills. 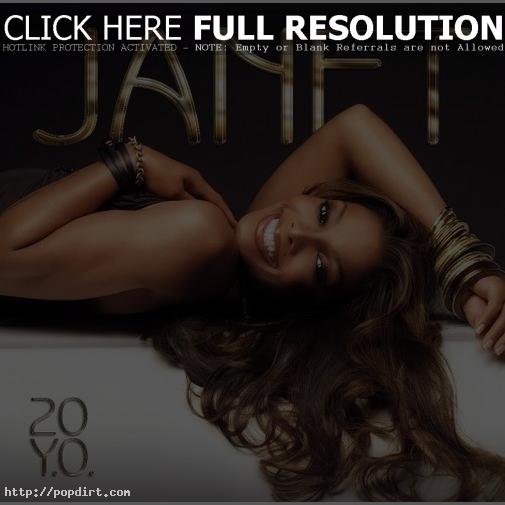 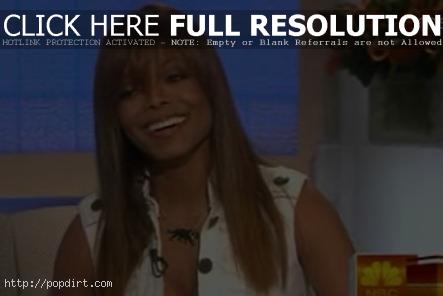 Video of an interview and performances of ‘Nasty’, ‘So Excited’, and ‘Call On Me’ featuring Nelly at MSN.com has since been removed.

Pictures are available from RexFeatures and GettyImages.

Janet Jackson Appears On ‘106 And Park’

Janet Jackson taped an appearance on BET’S ‘106 and Park’ in New York City on Monday (September 25), which aired the following day. Check out pictures from WireImage.

September 25, 2006 – Janet tells Giant magazine she was at an emotional low point when she she recorded ‘Love 2 Love’ off her new album ’20 Y.O.’ “That song was written and recorded while my brother was going through [his sexual molestation trial],” Jackson revealed. “The whole night trying to record, I could not stop crying. Michael was in my mind … Thank God the room I was singing in didn’t have any windows.”

September 22, 2006 – TMZ reports that in an interview for ‘The Oprah Winfrey Show’, Janet says she now regrets apologizing for her Super Bowl breast flash because it made her look guilty for something that was an accident. The singer also hinted things between herself and her partner in the wardrobe malfunction, Justin Timberlake, still haven’t smoothed over. She hasn’t spoken to the former *NSYNC star since the February 1, 2004 performance, and said “Loyalty comes first to me” when asked if she felt betrayed. Read more.

Though Janet Jackson told Oprah Winfrey and anyone else who has asked she gained 60 pounds to play a character in the movie ‘Tennessee’, Roger Friedman of FoxNews.com hears that isn’t the case. Movie insiders claim Janet, who has a history of piling on pounds between albums, was never told to gain that weight, and it wasn’t called for in the script. Taking her place in the project, which begins shooting in January, is Mariah Carey.

September 14, 2006 – Conan O’Brien joked during his Late Night monologue on Tuesday night, “Janet Jackson admits she recently 60 pounds. She said it was the old fashioned way. Yeah. Of course, in the Jackson family, ‘the old fashioned way’ means Janet’s father screamed the fat out of her.”

September 13, 2006 – Former *NSYNC star Justin was joined by Timbaland to perform his #1 single ‘SexyBack’ on ‘The Late Show with David Letterman’ on Monday (September 11). Timberlake was then on the hot seat, with Dave firing off questions about Cameron Diaz, smoking pot in Amsterdam for his Rolling Stone interview, and the Janet Jackson Super Bowl breast flash, which he admitted wasn’t well thought out choreography. YouTube has since removed the video.

September 7, 2006 – Roger Friedman of FoxNews.com hears that Janet Jackson’s new album ’20 Y.O.’ “is too much the work of her boyfriend, Jermaine Dupri, and not enough of her regular producers, ‘Jimmy Jam’ Harris and Terry Lewis. Dupri apparently got final cut on the album, pushing Jackson further away from the Harris-Lewis formula that brought her so much success. Instead, expect a much more hip-hop oriented sound.” Friedman suggests that is “not necessarily the right move for a 40-year-old woman.”

September 3, 2006 – Billboard.com caught up with Jermaine Dupri and Jimmy Jam about their work, along with Terry Lewis, on Janet Jackson’s latest effort ’20 Y.O.’, due out September 26th. With the first single ‘Call On Me’ teaming Janet with Nelly, it was only her second collaboration with a contemporary hip-hop artists, after 1998’s ‘What’s It Gonna Be’ with Busta Rhymes. “If Janet had just come out, people wouldn’t be asking that question,” Dupri said. “Of course she don’t need Nelly, but in today’s market, half the kids watching (BET music show) ‘106 & Park’ don’t even know what ‘Control’ sounds like.” Read more.

Neil Sean of Sky News reports Janet Jackson’s recent weight loss has attracted the attention of Playboy, who want the singer to pose nude in a future issue. “I am not that kind of girl,” Janet insisted. “I find it flattering, but who knows… maybe in the future.”

Michael Made Janet Self-Conscious As A Kid

August 30, 2006 – Conan O’Brien joked during his Late Night monologue on Tuesday night, “This is weird. In a new interview, Janet Jackson says her brother Michael made her self-conscious as a child because he called her ‘Fat Butt’. Yeah. When he heard this, Michael said, ‘That’s ridiculous. I would never look at a woman’s butt.'”

Janet Jackson opened up to OK! magazine about her ex-husband James DeBarge’s brother Young Debarge, who claimed that the singer had a secret child during their marriage, named Renee, who was raised by Janet’s eldest sister, Rebbie. “The really painful thing about that is that they are bringing a real human being into it, my niece, and no one’s thinking about her feelings,” Janet said. “She calls me about it and says, ‘Aunty Janet, it’s so stupid. They don’t even have the math right…’ There is no way I could have had a child. Everyone would have seen that I was pregnant.”

August 9, 2006 – Jay Leno joked during his Tonight Show monologue on Tuesday night, “Janet Jackson has posed topless for the new issue of Vibe magazine. Yeah, sounds like she’s getting ready for football season.”

August 7, 2006 – Janet appears on the cover of Vibe magazine’s September issue wearing a skimpy bikini bottom and a necklace made of large shells. Her right arm covers her breasts. Will she ever stop posing for sexy photos? “Of course. When I’m 80,” the 40 year-old singer tells Vibe. “That’s when I’ll call it quits.”

August 6, 2006 – Janet appeared to be shy as she left a New York restaurant following lunch the other day. Despite there being only one photographer and one videographer, Janet had a bodyguard shield her – and another came up to put his hands in front of the lenses. Footage at splash-video.com requires an account.

August 5, 2006 – Bill Zwecker of The Chicago Sun-Times caught up with Janet at her press conference Wednesday at the Peninsula Hotel. Asked how she deals with tabloid scrutiny, especially the attention after her Super Bowl breast flash, Jackson responded, “I used to be shy, but I’m not so shy anymore. But frankly, unless there’s something totally false or really hurtful that’s published — and needs to be addressed by a publicist or my management – I never see any of it. … My friends are my friends and they never, ever bring that stuff to my attention or show me anything. The only time it comes up, quite frankly, is in interviews when people like you ask me about it.”