Jem checked in with fans on her blog at MySpace (@jem) on Thursday (October 8) after signing up on Twitter. The Welsh singer songwriter tells readers:

What’s up guys! So I’ve finally taken the plunge and signed up – www.twitter.com/jem

What a weird and wonderful way to be connected to the world!

As some of you might have noticed by the amount of moss growing on my websites (my Mum is most concerned!), I tend to resist spending extra time I have on computers. Not because I don’t want to be in touch with everyone, I love hearing from you all, knowing you’re out there enjoying the music! That’s what it’s all about :)

But because I have an aversion to sitting in front of a computer spending more time in a virtual world than in the real one which is beautiful and alive and waiting for me right outside my window! You know what I mean? I don’t want to forget to smell the roses…

Of course once I can just telepathically beam my thoughts around the world we’ll all be set ;) Until then I’m thinking twitter might actually be the perfect place for me!

Jem updated fans on her blog at MySpace (@jem) on Wednesday (May 13), talking about a new side project she’s working on. The Welsh singer-songwriter tells readers:

Thanks for all your messages, especially all you guys in Mexico, I hope you have been able to find the CD by now! I’ll write again soon to be more specific about everything that’s going on, my plate is very full I must say, and all is super duper!

One of the most exciting things is being back in the studio again. I’ve decided to record a ‘piano’ album kind of side project that will be out later this year, doing quite a few covers, can’t wait to share it with you all :)

I’m also thinking about possibly starting twitter, to send nice messages and sentiments that come my way or out of my mind, to anyone who might be in need of a positive arrow into their world from time to time. I’m so not one to want to spend much time near technological equipment though, unless it makes music ;) That said, I have a feeling it could be a good thing so we’ll see, I’ll keep you posted.

Jem Preps February 2009 ‘Down To Earth’ Release In Europe/UK

Jem announced that she’ll be releasing ‘Down to Earth’ in the UK and continental Europe on February 2, 2009, both the album and its title track. It also happens to be the birthday of her Welsh grandfather, who passed away in July, and would have turned 93. “It is so lovely and auspicious that the album is going to be released on his birthday,” Jem said. “There are no coincidences you know.” The album, which was released in the U.S. in September, is dedicated to him and her three other grandparents.

Jem will also be touring the UK and continental Europe in support of the release. “‘Down to Earth’ is different from ‘Finally Woken’ in a good way. As before, I mix up genres as I like listening to lots of different types of music so that’s what comes out. It is a little darker in parts and then a little lighter too, as is life.”

Jem checked in with fans on her blog at MySpace (@jem) on Thursday (October 2), following last month’s release of her second album ‘Down to Earth’. The Welsh singer songwriter tells readers:

The music industry has changed so much since my last record, it’s like I’ve been away 500 years! There definitely seems to be a lot more worries in today’s climate of shrinking sales etc. It’s important to understand what’s going on, but I have to say, it’s not something I’ve allowed trouble me in the past, and I don’t feel the need to worry about it now. ‘A la’ a lot of my lyrics, I know the best of us comes when we’re happy, light, and inspired and that’s where I like to keep my mind focused. The truth is, the people who matter the most are YOU. The people who consume the music, buy cds / records / downloads, love them, sing-a-long in cars, on walks, at work and at home (I do!), who go on the internet and spread the word etc. You are powerful, which is wicked! So I just wanted to tell you, I made this album for me and for you, and I’m very happy you’re out there.

On this note, I’d like to apologize to everyone outside of the US as you might have noticed the album has not been released at the same time. It has been slightly delayed which was not intended and is not ideal but it’s out of my hands (politics again, yawn… I probably shouldn’t have called it my ‘Empire Strikes Back’ from the beginning, that’s dark sh** man..!)

It won’t be long now though and I will post the date the minute I know. We have a great partner overseas so it’s all gonna be superduper. It is a lovely package so I’m glad you’ll get to see it soon too! 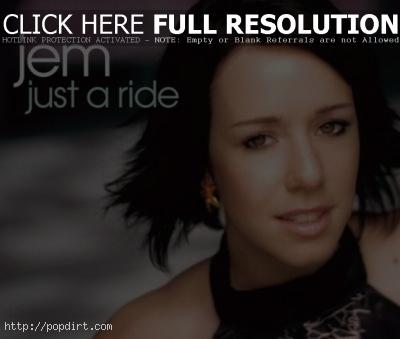 Jem is out with the music video to her new single ‘Just A Ride’. The track is the second single from the Welsh singer songwriter’s debut album ‘Finally Woken’, out now on ATO. Watch it online below.

Jem Performs ‘They’ On ‘Top Of The Pops’ 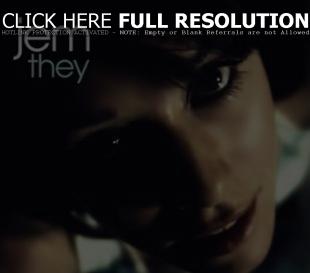 Jem performed her new UK single ‘They’ on ‘Top Of The Pops’ on Friday (March 25). Watch the performance at YouTube.

Jem is out with the music video to her new single ‘They’, from the Welsh singer songwriter’s debut album ‘Finally Woken’, released on ATO. Watch it online below.