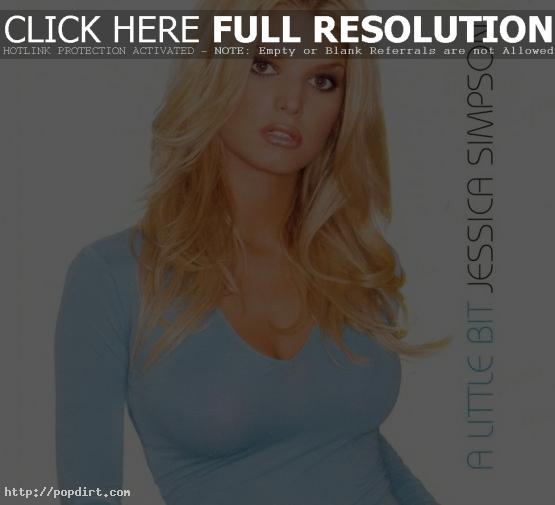 Goto.com’s August search term results for Jessica Simpson related terms are out, and the term ‘Jessica Simpson’ got a respectable 93,358 searches for the month. This compares to 163,883 for rival Christina Aguilera and 47,839 for Mandy Moore. ‘Jessica Simpson picture’ was #2 with 15,679 queries while ‘Jessica Simpson nude’ was, as with all the younger female pop stars, near the top at #3. As one might expect, Jessica’s internet popularity blows away that of her boyfriend Nick Lachey, who only garnered 4,041 searches last month. Jessica’s most searched for song was ‘Irresistible’ with 617 searches.

Jessica Confesses To Being Back With Nick

September 27, 2001 – In an article in this week’s US Weekly, Jessica Simpson talked about her reaction to the terrorist attacks in the United States but at the same time admitted to being back together with Nick Lachey.

Jessica states, “My boyfriend called and woke me up. He was right across the Hudson River from where the twin towers once stood, waiting for a flight at Newark International Airport.

“I was in my hotel room in L.A. talking to him as the plane was going into the World Trade Center and I was stunned. I was like, ‘Nick, drive home to me right now.'”

Jessica Simpson released a statement through her official site’s message board contact regarding the terrorist attacks against the United States that was much more thoughtful that her fathers comments, though like her father, she couldn’t help but add a plug for her new video. Read on.
END_OF_DOCUMENT_TOKEN_TO_BE_REPLACED

I was disappointed to read Jessica Simpson’s father Joe’s message talking about returning home where he seems to address the horrible terrorist attacks Tuesday as an afterthought to promoting his daughter.

In his message, Joe Simpson wrote:

Hey you guys!!! we are home…… i can’t tell you how good it is to be home for a moment. i have loved sleeping in my bed… i forgot how much i loved home.

Jessica is so happy to be sleeping at home. wow, she is just enjoying being a normal person. of course, this won’t last. we will be working again this weekend.

Thank you so much for praying for my mom. She is really having a tough time. She has never been sick. she has always been the one to take care of everyone else. This is really hard for me to watch. I don’t understand why things happen. We can only trust that God has a plan.

Of course, we can hardly believe what has happened in New York and Washington. I know that each of us will be changed forever. We can only pray!

Hopefully, Jessica will be making a video entry soon. Things have been a little crazy, but she still loves you guys…. she will be introducing her new video on the 20th… make sure you watch and vote it to the top…..

We are looking forward to the future. remember…. a little bit goes a long way!

Having a ‘of course’ blurb taking precedent over how happy Jessica is to be home and talking of voting a new video Jessica made to the top of TRL is difficult to stomach. Joe could learn well to separate promotion from condolences… the two don’t mix…. and yeah, that would include talking about his sick mother in the same message as well (and certainly I don’t fault him for updating readers on that, let me be clear). It would be best if Joe chose to wait at least until next week to try and shove commercialism down readers’ throats. Shame on you, Joe Simpson.

Conan O’Brien had a segment on Friday for Triumph’s appearance at the VMA red carpet, the show, and the press conference afterwards. For a transcript to what happened, including shots at J.Lo of course, and *NSYNC, Jessica Simpson, Pauly Shore, Will Smith, and others… read on.

Conan: The MTV Video Music Awards were last night and it was a big, big deal. All the big stars turn out. Well, we here at “Late Night” were especially proud that our good friend got to go. And by our good friend, I mean Triumph, The Insult Comic Dog.

Yeah. He got to go. He was also one of the featured performers on the show. He got an album on the charts. This guy’s gonna places. And apparently triumph was there all night and before the show, he actually caught the action on the red carpet, brought a film crew. Take a look.

Triumph: Tonight, the met opera house is brimming with hundreds of pop music’s biggest stars. Yes, the entire spectrum of pop music is represented here — everything from crap to [ Bleep ].

Hey, where’s DJ Jazzy Jeff? Where’s Jazzy Jeff? Doesn’t he get to poop on movie screens once a year, too? We love you.

Hey, A.J., You’re a Backstreet Boy. Why did it take so long for you to get depressed?

Gwen Stefani! Gwen, there’s no doubt that you suck.

I’m trying to figure out who of us — which of us has the better life. What do you think, folks? What’s better? To interview boy bands all day or to eat your own puke.

It’s a hard one. There’s Jessica Simpson. Very original. She’s being told what Britney’s doing so that she can rip it off.

For Pauly Shore: This is very embarrassing. The 1995 awards are right next door.

Janet Jackson, please talk to me! Is my Michael coming? Is he bringing the llama?

I want to insult the llama.

Conan: Yeah, that was some night.

Well, of course, after he was done on the red carpet, then it was time for the actual awards show itself. Here’s a highlight from Triumph’s appearance.

Triumph: How do you score, man? You must be hung like a great dane.

They hang out a lot. Anyway, afterwards, triumph was immediately hustled to the press tent, where I thought he conducted himself very professionally and did a great job.
END_OF_DOCUMENT_TOKEN_TO_BE_REPLACED

USOpen.org had a brief chat with young tennis star Andy Roddick where he was asked about rumors that he and Jessica may have met and exchanged telephone numbers. Andy denied the reports and said it has been a distraction for him at this year’s tennis tournament.
END_OF_DOCUMENT_TOKEN_TO_BE_REPLACED