Jordan Pruitt responded to a concerned fan who was upset that the pop singer wasn’t getting much promotion from Hollywood Records, prompting the 20-year-old to reveal that she’s no longer on the label that is home to Miley Cyrus, Demi Lovato and the Jonas Brothers. Jordan says she’s working on getting a new record deal. She said earlier today on Twitter (@Jordansblog):

Dear Concerned Fan,
I am in fact no longer with Hollywood Records, by my own choice, I love and respect them. And will always be grateful for everything they did for me. But it was time to part ways! Just wanted to address all the rumors! And I’m in the process of getting a new record deal right now… don’t worry ;)

Jordan Pruitt performed the U.S. National Anthem at the Los Angeles Galaxy vs Philadelphia Union soccer match on April 2nd at the Home Depot Center in Carson, California. Watch it via her YouTube channel below.

Jordan Pruit checked in with fans on her blog at MySpace (@jordanpruitt) on Thursday (June 3), discussing her Make a Wish foundation show in Los Angeles with Miley Cyrus last month, coming home to a huge flood in Nashville, and progress on her new album. On the latter topic, the pop singer writes:

I am still working on my new album right now! I’ve written close to 50 songs at this point.
This is probably the most proud I’ve been about anything. I’ve truly enjoyed the process, and all of the lovely people I have worked with. It has been such a blessing. And I also turned 19 two weeks ago! Do I feel any different you ask? Hmm not really.
But I will say I have grown up a lot in the past year, and feel like a new person.

Miley Cyrus and Jordan Pruitt performed during Make-A-Wish Foundation’s World Wish Day celebration at The Grove in Los Angeles on Wednesday (April 28). Watch Miley’s performance of ‘The Climb’ at the event below.

Jordan Pruitt Performs Songs Off Her New Album In LA

Jordan Pruitt checked in with fans on her blog at MySpace (@jordanpruitt) on Tuesday (April 6), discussing her time in Los Angeles, which included the chance to do five shows. The 18-year-old writes:

So much to tell you. I just got home from LA, and it’s kind of Bittersweet. This was the BEST time I’ve ever had. I played five shows when I was there, including Hyde Lounge, Bardot, and House of Blues! It was so much fun, because I sang songs off my new album.

I also got to see a lot of my friends while I was out there too! There was also an earthquake …. Which I didn’t feel. And If I did I would’ve probably peed my pants, so that’d good haha! I also sang with the Soul Choir out in LA, and it was so much fun.

They were really amazing, and it was such a blessing. I want to thank everyone for coming out to see me perform, and I love you guys so much!!! XOXO

Jordan Pruitt checked in with fans on her blog at MySpace (@jordanpruitt) on Tuesday (March 2), where the singer discussed progress on her new album and her appreciation for her fans. The 18-year-old writes:

My new album is also going amazing. If you check my twitter a lot, you will see I tweet about it every day! I’ve written thirty or more songs so far! Each and every song is so dear to me. This album means everything to me. After everything I’ve been through, the good and the bad, it has made me who I am. It’s not about having a destination to reach. It’s about the journey it takes to get there. And my journey I’ve been on, hard sometimes, it’s made me the person I am today. I am really grateful to not only my parents, but to God for everything and everyone He has put in my Life.

Jordan Pruitt Having A Blast In The Studio 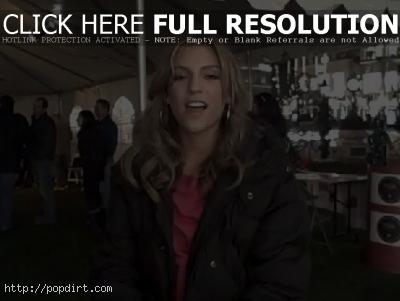 I’ve been super busy writing and recording new music! I have about 20 songs written so far, but I have a long way to go :) I’m having a blast being in the studio. When I was seven years old, I was watching TV and Britney Spears music video came on! And I said, “I wanna be a singer on tv one day.” Never in a million years did I think I would ever be doing this. It’s a dream come true to be doing what I LOVE :) This is my Third Album, and this is the most real thing I’ve ever written. It’s my diary put into songs. It’s my heart and soul put out there for everyone to see. It’s honest and vulnerable. And I LOVE it.
I can’t wait for you guys to hear it!!! Love yall XO

Jordan Pruitt: You Have To See Nick Jonas On Tour

Jordan Pruitt updated fans on her blog at MySpace on Tuesday (January 5), talking about progress on her new album and attending the Nick Jonas & The Administration concert at Ryman Auditorium in Nashville the other night. Pruitt writes:

I’ve been super busy writing my new album! Been living in the studio lately!
And I’m loving how the new album is sounding!
I went to Nick Jonas’ show in Nashville last night! It was AMAZING!!
I was thinking about the first show I played with the Jonas Brothers in San Antonio.
And to see how far he was come, was truly amazing! I’m SO proud of him, and he was incredible! Not only an amazing singer, but an amazing musician. You HAVE TO go see him play on his tour! :) So go get your tickets now!

Jordan Pruitt offered a holiday greeting for fans on her blog at MySpace (@jordanpruitt) on Tuesday (December 22). The 18-year-old pop singer writes:

I hope all is well! I’m still hard at work on my new album! And I’ve just been living in the studio lately… which I love. I just wanted to say Merry Christmas to you and your family! You guys have made this year very special for me, and I cannot say thank you enough :) You all are the best fans in the world! Love you Guys!

Jordan Pruitt checked in with fans on her blog at MySpace (@jordanpruitt) on Monday (November 23), discussing her Thanksgiving plans, her new album and doing a couple benefit shows. The pop singer writes:

After Thanksgiving, I’m headed to LA to start writing and recording my new album. I’m so extremely stoked haha! And After a few days in LA, I’m flying to San Diego for a few shows. It’s called Carols By Candlelight. This show helps benefit the Make A Wish foundation, and I worked with them last year too! I’m performing with LeAnn Rimes this year in San Diego! Very Excited :)