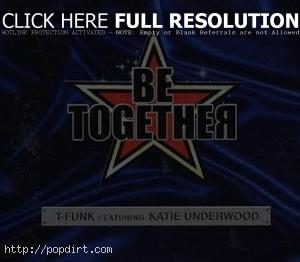 T Funk is out with the music video to his new single ‘Be Together’, featuring former Bardot singer Katie Underwood. Watch it online below.

Former Bardot star Katie Underwood has weighed in on the recent news that fellow Aussie Delta Goodrem is battling cancer. She says on her official website, “This week Australia was shocked with the news that Delta Goodrem has cancer. Fortunately, her condition is curable and we hope she will recover well. My thoughts go out to her family who must be struggling to come to terms with what has been an amazingly successful year for Delta, only to be facing this terrible illness. It is hard to think of anything to report this week as it all seems so irrelevent in the face of such news. At times like these I feel grately to be happy, healthy and doing what I love – music. I’m sure Delta’s love of music will be her saving grace, as it would be mine. Get well soon Delta – we are all cheering for you.”

Underwood Taking ‘Beautiful’ To The Next Level With ‘Danger’

The Daily Telegraph reports former Bardot singer Katie Underwood has signed a record deal with Transistor Music to launch her solo career. For her debut song ‘Danger’, which will hit the airwaves from August 11th, Underwood has teamed up with Australian producer Shane Monopoli, who recently returned from the US and the UK working with Justin Timberlake and Christina Aguilera’s producer Guy Roche. “It’s not going too radical, it’s along the lines of ‘Beautiful’, but with more guts and energy,” Underwood said, referring to her previous single. “I’m taking it to the next level.”