Kimberley Locke Had A Blast At American Idol Experience Launch

Kimberley Locke updated fans on her blog at MySpace (@kimberleylocke) on Tuesday (March 10), talking about her participation in the launch of the American Idol Experience at Walt Disney World Resort last month. Locke tells readers:

The day was amazingly organized and well put together from beginning to end. I was fortunate enough to host the “blue” carpet for ET and talk to every Idol present. It was a long day but well worth it. I had a blast meeting everyone! I think most people assume we all know one another but a lot of them I met for the first time. Not too mention it was a blast catching up with some of the producers who were there for season 2. I could not have had a better experience.

When do we get the next Kimberley Locke album? I think you should just record a dance album since your dance mixes do so well on the charts and all us gays love you!!!!!!

I have definitely thought of recording a dance album. It makes total sense! I have had so much success on the dance charts. This is not out of the question. A dance album will be in the top three options for the next album.

Why aren’t you as popular in the African American community as you are in the gay community?

That’s a very good question….I don’t have an answer to that. Maybe I will be one day.

Kimberley Locke checked in with fans on her blog at MySpace (@kimberleylocke) on Tuesday (January 20) after attending the presidential inauguration. The ‘American Idol’ season two finalist tells readers:

I’m sure that you all have heard by now that the cruise is being postponed due to the issues that we are having with the economy. We could not foresee this situation but we look forward to having it in the near future once the economy picks up. Of course, you will be the first to know!

Kimberley Locke answered a few fan questions on her blog at MySpace (@kimberleylocke) on Sunday (December 7). The singer was asked by one if she kept in regular touch with any other contestants from her season of ‘American Idol’, or if she’s become close with any other season’s ‘Idol’ alums. “Unfortunately, no I don’t,” the season two finalist said. “In the beginning I did. Now I only really talk to Ruben and sometime we go a month or so without touching base. He did a concert with me at my Charity event for Camp Heartland, it was a BLAST!”

It’s notable that Locke did not mention her former roommate, Clay Aiken, who she had a falling out with in 2007 after Aiken took offense to Locke discussing a tour that would have brought Locke, Aiken and Studdard together. “I told Billboard I was ‘hopeful’ that the tour would come together,” Locke said in a MySpace blog. “(That didn’t get printed.) In no way did I imply that we were all committed to this tour idea. So contrary to Clay feeling ‘unfortunate’, that the story ‘found it’s way to the press unauthorized’, it was not ‘unauthorized’. It was put out there my me, who conceived the touring idea and called my friends for their involvement. If Clay had chosen to return my phone calls over the last two months, he would perhaps not feel as ‘unfortunate’, and he would have been made aware that I mentioned it to Billboard.”

Just last month, Locke talked about the fallout of the 2007 incident, telling AccessHollywood.com correspondent Laura Saltman at a rehearsal for the 2008 ‘American Idol Holiday Tour’: “Clay and I aren’t really friends anymore. We lived together, but some things transpired and, you know, we’re just — I don’t really talk to Clay anymore. It’s hard to live with someone. Roommates, boyfriends, girlfriends.”

Kimberley Locke Performs With Justin Guarini, Gets Ready To Vote

I am currently at home visiting with my mom for a few days. I did a show in Memphis this weekend with Justin Guarini. We had a blast!!! A couple of my friends had birthdays this weekend and we celebrated on Beale Street at B.B. Kings. We were there last night and they have an amazing band. If you have never been to Beale street you should definitely go!

Election time is upon us and I encourage everyone to exercise their right no matter who you’re voting for… JUST VOTE!!! I will be voting tomorrow. Getting in on the early action. How exciting!

Eric Hutchinson, who performs on ‘The Tonight Show with Jay Leno’ (NBC) on Monday.

The Ting Tings, who perform on ‘The Late Late Show with Craig Ferguson’ (CBS) on Monday.

Britney Spears’ mother Lynne, who discusses her new book ‘Through The Storm’ on ‘Today’ (NBC) on Wednesday and ‘Rachael Ray’ (Syndicated) on Friday.

New Kids On The Block, who perform on ‘The Hour with George Stroumboulopoulos’ (CBC) on Wednesday.

Kimberley Locke, who performs on ‘Today’ (NBC) on Friday.

Kimberley Locke checked in with fans on her blog at MySpace (@kimberleylocke) on Sunday (September 14). The ‘American Idol’ season two finalist writes:

Anyway, I am actually on a plane headed to Tulare, CA. I just found out that my band is still in NASHVILLE! HA! Cracks me up. We get delayed SO much, but it always seems to work out…Say a little prayer they make it. They got rerouted through Dallas so I’m nervous. I’ll let you know how it works out.

Speaking of TEXAS….. What about Ike? How are all of you in the gulf? I have been watching CNN religiously (which I am addicted to) the past two days and I am praying for all of you and I hope that you are out of harm’s way and your families are safe. Natural disasters are scary. I went home last year to neighborhoods that had been wiped out and a baby found wondering in the rubble. It’s scary to see and it’s an instant reality check on how precious life is and how blessed we all really are. I hope everyone is safe.

Kimberley Locke checked in with fans on her blog at MySpace (@kimberleylocke) tonight, discussing a half marathon she planned to run in San Francisco. “I am sure you are wondering about my marathon in SF,” the ‘American Idol’ season two finalist writes. “I am so embarrassed to say… I OVER SLEPT! Can you believe this? I can’t. I finally got over it and chalked it up as it just wasn’t meant to be. As most of you know I had a show that night at the Performing Arts Center that was so much fun and successful. So maybe that was God’s way of telling me I was trying to do too much. I actually ran my own half marathon yesterday. I was really cranky and tired afterwards. I felt like my body was going to fall apart. Remind me why I am doing this, again?”

Kimberley Locke Running Her First Half Marathon On Sunday

Kimberley Locke checked in with fans on her blog at MySpace (@kimberleylocke) last night. “I have so much that I would like to write about so, I will start with the things that are coming up soon,” the ‘American Idol’ season two finalist writes. “As you can see on my calendar I am running my first Half Marathon Sunday in San Francisco at 5:30 am. I am so excited and nervous all at the same time. This is part of my training for the DC Marathon in D.C. on October 26th. I have been running since January of this year. Since losing weight I realized that I need to set personal goals for myself each year that will keep me on track. This year my goal is the marathon.”

Locke continued, “I’ve been running about 3 to 4 times a week. Each week increasing my mileage. This morning I ran 5 miles and boy was it hot! Running is such a mental challenge but it’s very therapeutic at the same time. For the most part I have enjoyed the challenge….but it’s not easy. For any of you who are in the SF area send me out some good vibes and maybe I’ll see some of you there.”

Kimberley Locke Gets A Haircut 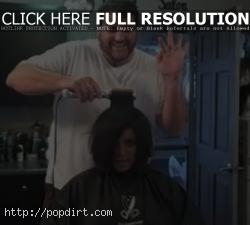 Kimberley Locke checked in with fans on her MySpace TV channel as she was getting her first short haircut in years, using an InStyler.

The ‘American Idol’ season two finalist showed off her old hair and said, “I think it’s time for a change. No pun intended.” As she was getting her hair cut, she told viewers, “I hope you like it… I hope I like it for that matter.”