Kimberly Caldwell is celebrating the release of her debut album ‘Without Regret’ today. The record features the single ‘Desperate Boys & Stupid Girls’ and ten other tracks meant to inspire and empower – many of which were written by the singer herself. “Everything I’ve done has led up to this moment,” she says. “I’m looking forward to people finally getting to know the real me!”

“I hope you guys enjoy it as much as I enjoyed putting it together for all of you and it’s definitely going to be worth the wait,” the ‘American Idol’ alum says in a video clip below to celebrate the album’s release. 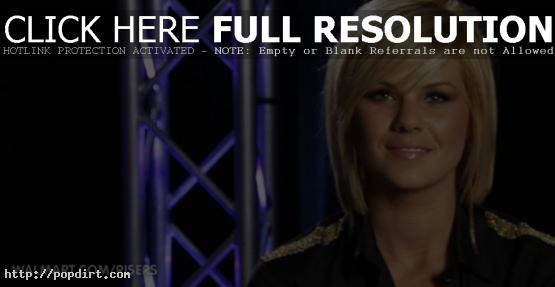 Walmart Soundcheck Risers is offering a free download of Kimberly Caldwell’s new single ‘Desperate Girls & Stupid Boys’. In an interview with the site, the ‘American Idol’ alum talked about how she’s been an entertainer since birth, her post ‘Idol’ career, deciding to get back into music, who she worked with on her debut album, how the album’s main message is trying not too hard to fit in, feeling frightened by singing her own music, Twitter and more. Check out additional pictures below the cut. Check out the interview video at soundcheck.walmart.com. END_OF_DOCUMENT_TOKEN_TO_BE_REPLACED

In less than two weeks, Kimberly Caldwell will release her debut album ‘Without Regret’. Ahead of the release, the ‘American Idol’ alum talked about the song ‘If You’re Going to Fall’. “It’s the song that’s speaking to the other person and saying, ‘Hey listen, if you’re gonna go there and you’re gonna fall in love, and you’re gonna give it all you’ve got, let it be me,” Caldwell explained. “I’m the one that can show you true love and I’m the one that can really make this work.” Watch the comments via YouTube below.

Kimberly Caldwell has been promoting the album at radio stations across the country, documenting her adventures for Us Magazine. Check out her most recent video diary to get a taste of life on the road below.

Kimberly Caldwell is offering her spin on the message of the track ‘Mess of You’ in the latest video clip describing tracks off her debut album ‘Without Regret’, released on April 19th. “For me it was about me pretty much making a mess of myself,” the ‘American Idol’ alum explained. “I think that we all have kind of put ourselves in bad situations, and made messes of ourself, but if we don’t, we’re not gonna grow. So this is pretty much delivering the message even if you make a mess of yourself and you put yourself in a bad situation, you can still get out of it pretty clean and pretty unmessy if you choose.” Watch the clip via YouTube below.

With only a few weeks to go before the release of her debut album ‘Without Regret’, Kimberly Caldwell explained the inspiration behind one of her favorite tracks on the album, ‘Say Love’. “It’s one of those songs that literally flowed out of me when I was writing it,” the ‘American Idol’ alum said. “When you’re in a really toxic or messy situation, aka relationship, sometimes at the end of the day to fix it all, you just need to hear the word love.” Watch the comments via YouTube below.

Kimberly Caldwell Discusses ‘Hotter Without You’

Kimberly Caldwell’s ‘Without Regret’ video series continues with an explanation of the track ‘Hotter Without You’, encouraging her fans to have confidence in themselves and not to rely on a significant other for validation. “It’s when you’re in a relationship, and you’re like with this person and you really feel like you need them, that they make you better in some way, and then you realize by them not holding you down, which I think is one of the lyrics, that you’re pretty sexy on your own.” ‘Without Regret’, the ‘American Idol’ star’s debut album, hits stores on April 19th.

Kimberly Caldwell shared with fans the inspiration behind the track ‘Naked’, from her upcoming debut ‘Without Regret’, which hits stores on April 19th. “This song is definitely one I related to a lot, because sometimes when you’re standing right in front of somebody and you’re speaking, even as loudly as I speak, sometimes they just don’t see you and they don’t hear you. It’s really hard to be yourself and let it all go when people are not taking you seriously,” the ‘American Idol’ alum explained. “It’s not literal. It just means that you’re stripped of all the walls that everybody puts up in a relationship.” Watch it via YouTube below.

Kimberly Caldwell will release her debut ‘Without Regret’ on April 19th, and each week the ‘American Idol’ alum explains the meaning behind a different track off the album. This week, Caldwell explains the back story behind ‘Heart Like Mine’, an anthem for anyone who has ever been in a not-so-perfect relationship. Watch it via YouTube below.

Every Wednesday leading up to the release of her debut album ‘Without Regret’, Kimberly Caldwell will release a new video that explains the inspiration behind tracks on the upcoming album, out April 19th. The first in this series takes on single ‘Desperate Girls & Stupid Boys’. The ‘American Idol’ alum talked about what makes her the happiest and what she wants fans to get out of the song. “I love the message, even though the title is kind of harsh,” Caldwell said. “The message for me is pretty much like you know when you’re in a club and there’s like 500 people and they’re like drunk and crazy and trying too hard, like wearing ripped t-shirts to look cool. That’s kind of when I feel the most lonely, and my happy time is when I’m hanging out with my sisters and my friends and my dogs being a dork and playing board games. That’s when I feel that I’m at my best. So I think what I’m trying to say is pretty much make sure that you’re putting all of your energy and your effort into people and things that actually deserve it.” Watch the comments via YouTube below.