What does Dr. Drew think about Lindsay Lohan’s choice to move to a sober living house? Does he think it will benefit her? ‘Access Hollywood’ correspondent Tony Potts spoke with the addiction specialist about the 24-year-old going to rehab in the days leading up to her jail sentence.

“She waited too long, she should have went the day she left the courtroom,” Dr. Drew said. “It shows motivation. The judge wants to see sincere motivation, not strategy to deal with the jail time. Here it’s kind of in between, we don’t really know. It looks like the thing that Lindsay’s panicking the most about is getting off the pharmaceutical drugs, because when she’s in jail she may not be able to get that.”

Lindsay Lohan: I Don’t Want My “Ex-Father” Michael Near Me

Two days before Lindsay Lohan is set to begin her 90 day jail sentence, the 24-year-old is disowning her father Michael on Twitter (@lindsaylohan). LiLo, who is currently residing at Pickford Lofts rehab facility, told her followers:

I don’t want my ex-father anywhere near me no matter where I am. He is crazy and scares me.

I don’t want Michael Lohan Sr. anywhere near me, no matter where I am. I am in a great place and he only brings negativity in my world.

Lindsay Lohan Gets Visitors On Second Day At Pickford Lofts

Hollywood.tv has footage of day two of Lindsay Lohan’s rehab stay at Pickford Lofts in Los Angeles, where the 24-year-old was visited by friends and her mother Dina, who ignored questions from the intrusive paparazzi. Watch footage via YouTube below.

Lindsay Lohan has checked herself into the Pickford Lofts rehab facility as of Wednesday night. The center was started by Robert Shapiro after his son died of a drug overdose in 2005. Lindsay has hired Shapiro, famous for representing OJ Simpson in his double murder case. The hope is that the 24-year-old’s 90 day jail sentence, which is due to begin next Tuesday, will be reduced or eliminated now that she has entered rehab. Watch Hollywood.tv footage of Lindsay at Pickford Lofts below.

Though Lindsay Lohan is scheduled to surrender to server her 90 day jail sentence on July 20th, PopEater hears that the 24-year-old is taking measures to prevent having to serve time. Lohan got rid of her attorney Shawn Chapman Holley, replacing her with Stuart V. Goldberg, who has said, “We’re going after them.”

“She is paying her new lawyer a fortune to fix this mess. She doesn’t care what it takes,” an insider told Rob Shuter. “If Lindsay needs to start a Facebook campaign or set up protests or something like that she is totally into it. They are treating Lindsay differently because she is a star, so it’s about time she used her star power to help her.

Lindsay Lohan was spotted visiting The Coffee Bean & Tea Leaf in Los Angeles with her mother Dina. They were joined by a large pack of paparazzi, including one from Hollywood.tv showering the 24-year-old with compliments. What footage via YouTube below.

Lindsay Lohan Shops With Ali And Dina While Paps Scuffle

Lindsay Lohan was spotted going shopping with her mother Dina and sister Ali at Blick Art Materials in Los Angeles on Thursday (July 8). The 24-year-old, who is soon to be serving a 90 day jail sentence, hid her face from the pesky paparazzi using a handbag, even while going up stairs. While the family were shopping inside, paparazzi were either jostling with themselves or security at the entrance, dropping expletives and threats. Watch footage via YouTube below.

LAPD pulled over the SUV Lindsay Lohan was in the passenger seat of just as she pulled up for an evening at Beso to celebrate her birthday the other night, before the 24-year-old was sentenced to 90 days in jail. Watch Hollywood.tv footage via YouTube below.

According to TMZ, Lindsay Lohan’s lawyer, Shawn Chapman Holley, has resigned from representing the 24-year-old, with sources indicating she stopped working for Lindsay earlier today. The news comes less than 48-hours after Lindsay was sentenced to 90 days in jail for violating her probation, and Lindsay may hold Shawn partially responsible because she had claimed ignorance about the repercussions of missing her alcohol education classes, and that by simply attending two classes the following week was still a violation. The web site added that Tiffany Feder-Cohen, who was just admitted to the bar in November, is now LiLo’s lawyer.

Dina Lohan was spotted arriving at LAX after Lindsay Lohan was given a 90 day jail sentence for violating her probation. The Lohan matriarch ignored questions from the pesky paparazzi as to whether she felt LiLo’s sentence was too harsh. Watch Hollywood.tv footage below.

Former ‘Access Hollywood’ host Pat O’Brien appeared on the ‘Today’ show to offer his thoughts on news that Lindsay Lohan will be headed for jail after Judge Marsha Revel sentenced the 24-year-old to a 90 day sentence for a probation violation.

“Well, I see a woman, a girl, a young lady, who is in serious, serious trouble,” said O’Brien, who has dealt with his own addiction issues. “And I’ve watched Lindsay throughout this whole thing. In fact, a few years ago I actually confronted her and said, ‘Are you going to be OK?’ Well, she’s not OK. And that’s a woman right there, a young lady– a very good actor, by the way — who is in serious, serious trouble. And this judge did her a huge favor because it was either this or die, in my opinion. And believe me, she was on a journey to death. And now she’s on a journey hopefully for recovery.”

Lindsay Lohan: Fu** U Fingernail Had Nothing To Do With Court

Lindsay Lohan responded to the media uproar over the words “Fu** U” being written on her fingernails while in court before receiving her 90 day jail sentence. The 24-year-old told her Twitter followers (@lindsaylohan):

@liana_levi didn’t we do our nails as a joke with our friend dc? it had nothing to do w/court.. it’s an airbrush design from a stencil xx

Watch LiLo emerging from the Beverly Hills Courthouse after receiving her sentence via YouTube below.

The ‘Today’ show has more on Judge Marsha Revel sentencing Lindsay Lohan to 90 days in jail for a probation violation, which had the 24-year-old actress in tears upon learning the news. Legal analyst Royal Oakes remarked, “The fact is this is not a sentence that amounts to a slam, this is not a hanging judge taking it out on Lindsay Lohan. Ninety days isn’t exactly time in a gulag.” Watch the report from NBC News’ George Lewis below.

Hollywood.tv spoke with Michael Lohan’s lawyer Lisa Bloom in Hollywood after Lindsay Lohan was sentenced to 90 days in jail and 90 days of in patient rehab upon her release. Bloom said that while the judge was within her discretion to levy that punishment, they would have prefered a rehab route. “We’re all footing pay the bill when she goes to jail. When she goes to rehab, she pays for it,” Bloom said. Watch it via YouTube below.

Lindsay Lohan Pleads For Leniency But Gets 90 Days In Jail 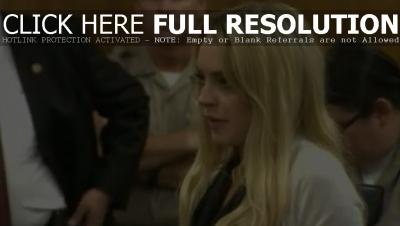 Lindsay Lohan pleaded with Judge Marsha Revel at Los Angeles County Superior Court in Beverly Hills for leniency for violating probation for her 2007 drunk driving arrest, but it was to no avail as the 24-year-old was sentenced to 90 days in jail and 90 days as an inpatient on a substance abuse program upon her release.

“I was taking it seriously. I wasn’t expecting any special treatment,” Lindsay told the judge before sentencing. “I’m not taking this as a joke. It’s my life and my career, something I have worked for my entire life.”

Birthday girl Lindsay Lohan was spotted outside Voyeur Nightclub in West Hollywood on Thursday night. While inside, the star was allegedly punched by cocktail waitress Jasmine Waltz.

Sources inside the club told Access Hollywood a punch had occurred and it was over the waitress’ ex boyfriend Danny Cipriani, who Lindsay had recently been seen with.

But Waltz insists she didn’t throw any punches, telling ‘Access’: “All I have to say is that disturbed little train wreck is delusional. I didn’t hit her, but I’d like too.”

Dina Lohan tells the New York Post that the Lohan family will be featured in a new reality show, with Lindsay Lohan making some appearances in episodes when she’s not busy filming ‘Lovelace’. “We have already started filming. The cameras follow us in our daily lives and as we promote our businesses,” Dina explained. “I want to prove that we are a good, hardworking family and we don’t have the crazy lives that some people claim we do.” One family member you won’t be seeing his Dina’s ex-husband Michael.

Lindsay Lohan Angry At X17 Linking Her To Matt Lanter

Lindsay Lohan is reacting to a report at X17 that she was flirting with Matt Lanter at Voyeur in Hollywood on Thursday night (June 24), the third time in a week LiLo reportedly had hung out with the ‘90210’ star. Lanter’s rep confirmed to the paparazzi agency that his client was with Lindsay, but added that “they didn’t show up together or leave together or ever see one another again.”

X17 couldn’t be more wrong!!!! Well, actually-they COULD and HAVE been more wrong. Oh my, what ever happened to real, world important news?

E! Online’s Marc Malkin has more on the Lindsay Lohan photoshoot for Bravo’s ‘Double Exposure’, which had the 23-year-old fuming on Twitter after the show said she was 8 hours late to the set. “She was 10 hours late,” an insider told Malkin. “The show has actually been nice to her and only has her being eight hours late.” One of LiLo’s handlers was captured on video apologizing for her boss’ tardiness. “I don’t know what is going through her head, but she’s forgotten what really happened,” the source added.