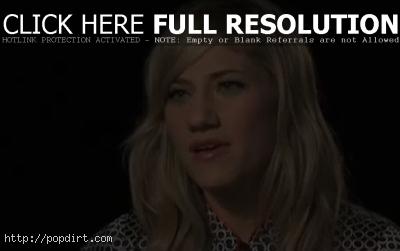 HipOnline.com caught up with Lucy Woodward and asked the singer what she’s dreaming about now. “I’m still dreaming about my shows. I’d really like to open up for like Lenny Kravitz or someone like that,” she said. “I’m still looking at myself as ‘I want to open up for this person’ and not ‘who do I want to open up for me’. I still have to check myself. I got this deal quickly and I could lose it quickly. It’s just the way the business is. I love what I’m doing and put everything I have into it so it’s good to check yourself. There are so many people who don’t get this far and it’s amazing when you do.”

Lucy Woodward recently released ‘Blindsided’, the second single from her ‘While You Can’ debut. She tells Launch.com that the song is “about having that haunting obsession/crush/love-thing for someone where it just doesn’t go away.”

Curlio.com chatted with Lucy Woodward for a lengthy interview. Asked who shifted her from her early interest in classical music to rock and roll, Woodward said, “I remember Debbie Gibson had come out, honestly. And that was the first ‘Rock and Roll’ concert I had gone to at Radio City. And I was like ‘Whoa, what is this?’ I had no idea. I was amazed that she sang and wrote, and that she had written and produced and played on everything herself. And I was blown away by that. So when she came out it was like the first… you know, and I had already been listening to Michael Jackson’s ‘Thriller’, that was like a major inspirational record. But when I realized that singers actually out there, young girls that actually write their own material… it was definitely Debbie Gibson. And I think “True Blue” was out around that time, Madonna, and George Michael’s ‘Faith’ around that time. So getting into those records was like, I couldn’t stop listening to them.” The interview audio at curlio.com has since been removed.

Lucy Woodward’s official fan site, LucyWoodward.org, reports that Lucy will be performing in a free, live 30 minute concert on Monday (May 19) at 5:30PM to tip-off the 2003 WNBA season at the NBA Store. Fans can also meet members of the New York Liberty.

Star magazine reports Vanessa Carlton and her boyfriend Stephan Jenkins of Third Eye Blind were spotted walking around in New York City when they encountered a homeless man. Generous Vanessa pulled out a wad of money that appeared to be at least $300, giving it to the grateful guy, who started crying and kept repeating, “God bless you.”

April 21, 2003 – Vanessa Carlton, Mya, Tweet and Lucy Woodward will perform at the third annual Pantene Pro-Voice competition, a singing contest for girls ages 14-24, in Central Park in New York on August 7.The lucky winner will receive a $5,000 demo-recording deal from Atlantic Records. Vocalists can enter and get more information at Pro-Voice.com.

Vanessa Carlton Hangs In NYC On Eve of Destruction

March 19, 2003 – Vanessa posted a new message on her official forum earlier today. She writes, “Hi, I’m in NYC, hangin out, writing music, and attempting to be domestic. I also froze my ass off today. I go into the studio next month. How excellent. Anyway, I miss my peeps. I’m doin a show this Saturday. I’m gonna play some new stuff. I saw ‘The Ring’ last night and I almost cried. it was totally pathetic. hope you’re all well. Unfortunately this is the eve of destruction for many. Much peace. Vanessa.”

After recording her debut CD, Lucy Woodward was called into the office by Ron Shapiro, the president of her label, Atlantic Records. “He said, ‘Oh my God, the head of AOL Music loves your record. You have no idea how important this is.’ He was right. I didn’t realize what a big deal it was,” Woodward tells David Hiltbrand of the Philadelphia Inquirer. Subsequently her video, ‘Dumb Girls,’ was streamed more than 1.5 million times before her record appeared in stores. “Now,” she says, “I’m kind of known as the Internet girl.”

Lucy appeared on Z100’s Reality Radio on April 12 – 13th. Amongst the tracks she played was ‘All The Thing She Said’ by t.A.T.u., her own ‘Dumb Girls’, Madonna’s ‘Ray of Light’, and *NSYNC star Justin Timberlake’s ‘Cry Me A River’.

Pop acts on talk television this week include Chantal Kreviazuk, who appears on the Tonight Show with Jay Leno tonight, and the Late Late Show with Craig Kilborn on Tuesday night. Look for Lucy Woodward on the Caroline Rhea Show on Tuesday, and Madonna drops by Live with Regis and Kelly on Friday.

Lucy Woodward, who has been singing in New York clubs and commercials since she was 16, made it clear to Billboard.com that she didn’t let a major producer come in and shape her first album. “I’ve been writing for the past five years, but the last year I got really serious about it,” Woodward said. “I had written half these songs before I met John, and I wanted to work with him for a long time, before he produced Michelle Branch and became ‘John Shanks.’ I knew I was going to make a guitar-based record, and I loved what he did. When you’re the new act on Atlantic Records, people come forward and try to work with you, but I was like, ‘No, it has to be John.'”