In an interview with The Sun, Melissa Green of Millionaires blasted rival act Ke$ha, calling the ‘Tik Tok’ singer a fake. “We hate Ke$ha,” Melissa calmly explained. “She is such a fake. She is not real. She’s signed to people who tell her how to act. That’s what makes us upset. We are who we have been since before the band. We are real – not like that white trash b*tch. This is how we dress every day – that is not how she dresses. She’d better watch her back. We’re gonna take her down. It’s three against one. Tik Tok b*tch.”

Check out the entire interview and watch the ‘Stay The Night’ video at thesun.co.uk.

Allison Green of Millionaires checked in with the pop electronic trio’s blog at MySpace (@millionaires) on Thursday (December 17), revealing why the group canceled their concerts this month. Green writes:

I just wanted to let everyone know what was going on regarding my health which led to the cancellation of all of our December shows. I wanted to keep it a personal matter, but due to the fact that rumors were starting to spread that we just “DGAF’d” about the shows and cancelled for no reason, made me feel obligated to let all my fans know what the true reason is behind all of this. So here is the whole story…

After arriving in London (12-7-09) I felt strong abdominal pains which could have ranged from either food poisoning to menstrual cramps. Soon after I was in my hotel room and the pain escalated to an extreme. Therefore, I was immediately rushed to the nearest hospital in an ambulance where I was admitted for 6 days. After the first 2 days I felt brand new but during the time spent at the hospital I had several scans which detected a cyst in my lower abdomen which was the size of a grapefruit. Little did I know that this cyst had been growing from over a year now, and has just now affected me. From what the doctor says it is rare to see a cyst of this size on anyone, let alone an 18 year old. The doctors insisted that I have no physical activity whatsoever until after I fully recover from the surgery. It was even a major risk letting me fly the 10 hour flight home back to the United States from London but I really wanted to have the surgery done at home instead of overseas. In 12 days (12-29-09) I will have surgery to remove this cyst. Worst case my right ovary will be removed. The doctor confirms that this is a common surgery that I will quickly recover from if I have the proper rest after. It will take 6 weeks to fully recover, but I will promise to reschedule all of our shows as soon as possible. Thank you for understanding, and I’m sorry to inform the cancellation of our shows in such short notice.

Allison xoxo
P.S. I will be in the hospital on New Years so have a drink for me! <3 Cheers. 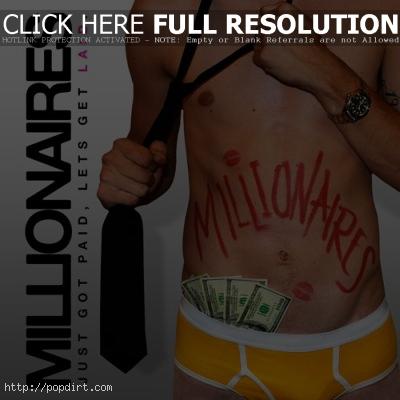 Millionaires are out with the director’s cut version of their new single ‘Just Got Paid Let’s Get Laid’, from the Los Angeles trio’s self-titled EP, which is now available at all digital retail outlets via Decaydance Records. Watch it via Vimeo below.

Los Angeles based electro pop trio Millionaires are out with the music video to their new single ‘Alcohol’. Watch it via MySpace below.