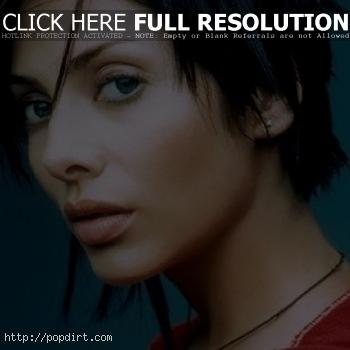 The Herald Sun’s ‘Confidential’ reports that Natalie Imbruglia had a secret screen test for a part in the Hugh Jackman starring ‘X-Men Origins: Wolverine’ in Sydney two weeks ago. As for the singer/actress’ current role in ‘Elise’, she told the paper, “Shooting (‘Elise’) and getting to play such an interesting character was a dream come true. I am still pinching myself about the whole experience and I definitely want to do more film.” Read more.

Natalie Imbruglia was the guest at David Jones in Sydney on Wednesday morning (December 26), where the singer rang the bell to kick off the Boxing Day sales. Natalie talked about how she spent Christmas, how long she’s in Australia, filming ‘Elise’ in Adelaide, her favorite brands, how this opening compares to Harrods in England and her shopping advice. Check out pictures from GettyImages.

Footage aired on ‘Today’ of the appearance has since been removed at MSN.

Natalie Imbruglia and Virgin Unite hosted a charity bowling tournament on Wednesday (September 5) at All Stars at Bayswater in London, England, where proceeds went to the campaign to end fistula. Check out Natalie’s page at endfistula.org. Check out a picture from FilmMagic.

Natalie Imbruglia And Daniel Johns Out And About In London

The following message was posted at Natalie Imbruglia’s official MySpace on June 12th: “Natalie’s long awaited 4th album is now to be released on 10th September this year. An official statement from Sony BMG is to be released on the release date and the album itself shortly.”

Reuters spoke with Natalie Imbruglia about her mission to help prevent fistula, a crippling childbirth injury that affects at least 2 million women. After agonizing days in labor without medical assistance women in poor countries suffer tissue damage, lose their babies and are left with chronic incontinence. Often they are ostracised by their husband, family and community. “It just should not be happening, that women cannot safely have a child in this day and age,” Imbruglia said. “How can you not be compelled to want to draw attention to this issue?” Read more.

Australian starlet Natalie Imbruglia was in Toronto yesterday to talk about a condition that causes two million women in the Third World to live in shame. “Governments … should make it their responsibility to end this unnecessary suffering,” remarked the singer, a spokesman for a United Nations campaign to eradicate obstetric fistula, a condition that makes women unable to control her urine or excrement and can be corrected with a $300 surgical procedure.

May 6, 2006 Jeff C Uncategorized No Comments

David Walliams and Natalie Imbruglia were photographed at Nobu in London, England on Sunday (February 26). Imbruglia, married to Silverchair singer Daniel Johns, has remarked about her desire to be on Walliams’ show ‘Little Britain’. “I’d be honored to be on the show. In fact, I’ve been begging,” she told radio show hit40uk. Check out pictures from FilmMagic and RexFeatures.

Natalie Imbruglia and Sophie Ellis Bextor were on hand for the Patrick Cox VIP Ad Campaign Launch on Tuesday (February 14) at Sanderson Hotel in London, England. Check out pictures from FilmMagic.

January 9, 2006 – Neil Sean of Sky News reports that after Sophie turned down the Cathy Dennis penned song ‘Toxic’ that enjoyed big success for Britney Spears, the former theaudience singer is crawling back to Dennis to write a song for her forthcoming album, ‘Sweet Music’. But Britney is competing for Dennis’ songwriting time.

Sophie Ready For A Return

October 12, 2005 – Sophie Ellis Bextor spoke with Neil Sean of Sky News about her plans to come back to the pop scene early next year. “I did guest vocals on a Busface track this year but this will be a return to full-on dance floor diva mode,” she said. “The world of pop has been rather dull without me, I feel.”

Natalie Imbruglia is joining the chorus of celebs such as Pink and Paul McCartney’s wife Heather Mills who have harsh words for Jennifer Lopez, and the diva’s use of fur personally and in her clothing line, Sweetface. “It can take up to 100 chinchillas to make one coat and Jennifer Lopez has one made of 80 of them, all killed by electrocution or having their necks snapped,” Imbruglia tells Britain’s Cosmopolitan magazine. “China, where most fur comes from, has no regulations for animal welfare. Dogs, cats and other animals are skinned alive and die slow, extremely painful deaths. Besides, wearing fur makes you look like an old woman!”