RTL caught up with the guys from Natural who revealed plans for a farewell tour. The boy band hasn’t posted an official announcement of a breakup on their website, only promising “an official statement about Natural from management coming soon.” The report, featuring comments from the band members, has since been removed from rtl.de. 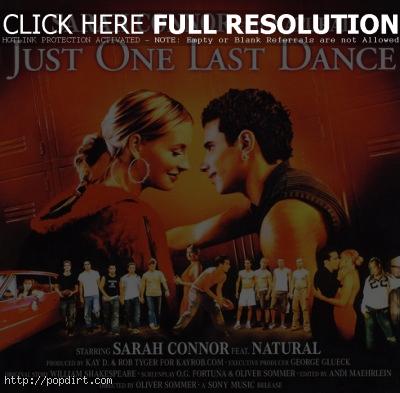 Marc Terenzi and his Natural bandmates have teamed up with his pregnant girlfriend Sarah Connor on their duet, ‘Just One Last Dance’. Watch the video online below.

Natural have released the music video to their new single ‘Let Me Just Fly’, which sees the Florida boy band change from bumblegum pop to pop rock, complete with guitar and drum playing. Watch it online at myvideo.de.

The guys from Natural were asked their thoughts on Christina Aguilera and what they think about her new image and her music. They responded on their official website as follows:

During their promotion tour in Thailand from May 29 to June 3, Natural engaged in a basketball match versus the team from a local TV station. After the match Natural autographed a ball that was put on auction to the public. The sales collected over $400 and later delivered by the band to a local charity association representant. Natural also performed a brilliant acoustic session in the high school gym where tha match took place.

Michael Johnson of Natural posted a diary update on the group’s website Monday. The boys are in England and Mike summed up the country saying, “London is really cool cause there is so much history and the people are funny. They actually understand our stupid sense of humor. We hadn’t had that in a while! Another thing that is unique about London is the crazy drunk people on the streets. They’re good for a couple laughs.” It wasn’t so cool though when he got his wallet stolen. “They didn’t take the other guy’s wallets that were sitting on top of everything, they took mine that was on my chain in my pants. So that good time turned bad pretty soon after that,” he fumed.

Natural member J posted a diary update last weekend sharing perhaps more than anyone would want to know about his food poisoning in Germany after eating a salad. J writes, “So we get to the house, I run inside to the bathroom, and as I’m walking out of the bathroom I realize there is a not only a TV crew but also a photographer there, and they’re taking pictures of me as I’m walking out of the bathroom! Needless to say, I wasn’t exactly looking my best! When they realized I was sick they stopped taking pictures and asked if I was OK. I went and to lay down in one of the bedrooms, and one of our BMG staff asked if I needed a doctor. I said yes and they went to call one.”

Pearlman’s Natural Not On MTV’s Wishlist

The Village Voice’s Michael Musto reports MTV is making it nearly impossible for any new boyband to break in today’s music market, especially with a somber tone following the tragedies earlier this month.

Pearlman instead has teamed with Claire’s Stores to market his new boyband, Natural. Musto claims, “Having met the Naturals and finding that unlike those other bands, where there’s at least one bottle rocket and one survivor of inbreeding these guys are all scarily attractive and personable. What’s more, they really are a band, they insist they can play instruments and were together for over a year before Pearlman made them into a flashy teeny accessory.”

You can find more on the band by going to our web links section where the band’s official site is listed.