Nylon are featuring two new songs on their ‘Best Of Nylon’ album that was released in November in Iceland. The disc also features a few Nylon classics that have been re-upped. The Icelandic group just posted clips of the new songs, ‘Shut Up’ and ‘Superstar’, on their MySpace player. Check them out at myspace.com/nyloniceland.

Nylon checked in with their Myspace friends with the following bulletin on Tuesday (November 6):

We just wanted to pop by and give you all an update on the goings on in Nylon camp, and to assure you we haven’t forgotten about all our fantastic fans over in the UK. The past few months have been all go for us over in Iceland. We have been in the studio recording three new tracks, and can’t wait for you all to hear them. We have had such positive feedback so far, and we are really excited to hear your views on them too. We shall get them up on our website and MySpace page very, very soon, so you can vote for which one you like the most, tell us all your comments on them, and maybe even play a role in deciding our come back UK single!

One of the tracks is called ‘Britney’, and it’s a fun, light hearted song about Britney Spears, which has been very well received by Icelandic Radio heading straight to number 1 on airplay, which we are very chuffed about. Our other two tracks ‘Shut Up’ and ‘Superstar’ are more up tempo songs, with ‘Shut Up’ having a rocky Avril Lavigne / Kelly Clarkson feel to it, which we absolutely love!

So make sure you keep your eyes and ears peeled for updates coming your way VERY soon!! Nylon are back in business!!

Alma Gudmundsdottir, Steinunn Thora Camilla Sigurdardottir, and Klara Osk Eliasdottir of Nylon checked in with their Myspace friends on Wednesday (October 31) with the following bulletin:

I know it’s been a while since you guys have heard from us but there is quite a bit going on!

Later this year (November/December), we will be putting out a compilation album in Iceland featuring all of our singles as well as two/three new tracks which we’ve already recorded. For all of you not in Iceland, we’ll have the songs available to listen to up on the MySpace soon! The album will also contain all of our music videos.

And for the UK fans, YOU HAVE NOT BEEN FORGOTTEN! We will be back over there early next year/late this year with some exciting new projects.

And the most exciting thing of all is the news we have to share regarding Disney. Soon we will be meeting with top executives of the Disney Channel to discuss a possible show we will be doing on there, WHICH WILL BE SHOWN WORLD WIDE! It’s all very exciting and nothing’s official yet but keep your fingers crossed. A possible appearance in High School Musical 3 is also being discussed.

Can’t wait to hear from all of you again, thank you so much for all of the CONTINUED support, the lovely comments and messages, and everything else.

Nylon’s Emilia Gets Married Over The Weekend

Nylon posted the following bulletin to fans on their MySpace on Monday (July 9): “Just this past Saturday, the 7th of July, Emilia married her fiance! If you’d like to leave a message for Emilia and her new husband, feel free to leave a comment!”

Nylon star Camilla Sigurðardóttir spoke with Top Of The Pops online in a Q&A, and was asked why the group aren’t called 100 percent Cotton. 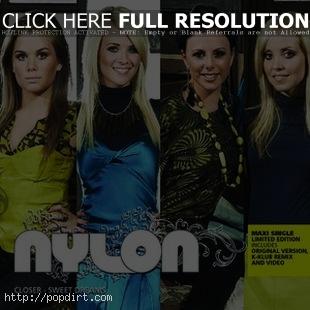 Nylon are out with the music video to their new single ‘Closer’. The track is off Klara Ósk Elíasdóttir, Alma Guðmundsdóttir, Steinunn Þóra Camilla Sigurðardóttir and Emilía Björg Óskarsdóttir’s self-titled third album, released on Universal Music.
Watch it at YouTube.

The Sun reports Nylon are keeping their dressing room doors firmly locked on tour as the opening act for McFly after seeing shocking pictures of the boy band nude. “We saw the pictures and we were a bit scared that we might meet them on stage naked,” group member Emilia said. “They’ve been really nice though. Danny, for example, knocked on our door just to say ‘hi’. We have experienced very nice boys but I don’t know, maybe we’ll see some other side to them. At the moment they’re just really nice to us.” 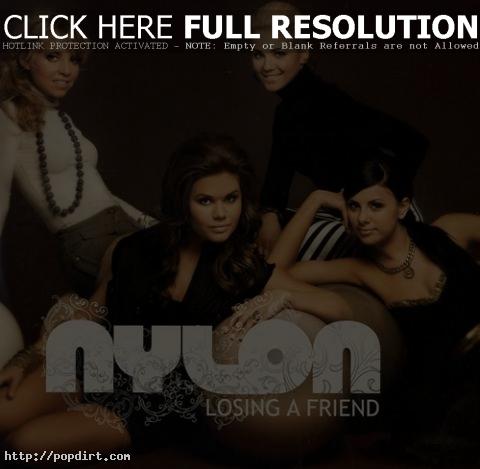 Icelandic girl group Nylon, featuring Klara Ósk Elíasdóttir, Alma Guðmundsdóttir, Steinunn Þóra Camilla Sigurðardóttir and Emilía Björg Óskarsdóttir, are out with the music video to their new single ‘Losing A Friend’. The track is off their self-titled third album on Universal Music. Watch it online at YouTube.