Peaches is out with the music video to her new single ‘Trick or Treat’, taken from the Canadian electropop singer’s fifth album ‘I Feel Cream’, out now on XL Recordings. Watch the Bobby Good directed video below.

Peaches is out with the music video to her new single ‘I Feel Cream’, the third release and title track of her fifth studio album, out now on XL Records. Watch it via YouTube below.

Peaches: Lady Gaga Is Doing Her Own Thing

Beat TV caught up with Peaches on her recent trek to Melbourne, where she addressed how she seems to have paved a mainstream path for Lady Gaga. “I don’t think she’s a watered down version [of me],” Peaches said. “I think she’s her own thing. I think that more and more, the mainstream is coming to me, and Lady Gaga is a symbol of that.” As for what offends her as someone who offends a lot of people herself, the 42-year-old responded, “The Jonas Brothers.” Watch the interview via YouTube below.

Peaches ‘Talk to Me’ Video

Peaches is out with the music video to her new single ‘Talk to Me’, the first official video from Berlin, Germany based electronica artist’s fifth album ‘I Feel Cream’, out May 5th on XL Recordings. Watch it via YouTube below.

Peaches ‘My Humps, My Dumps’ Video

Peaches is out with a parody of Alanis Morissette’s parody of Fergie’s ‘My Humps’. Watch ‘My Humps, My Dumps’ below. 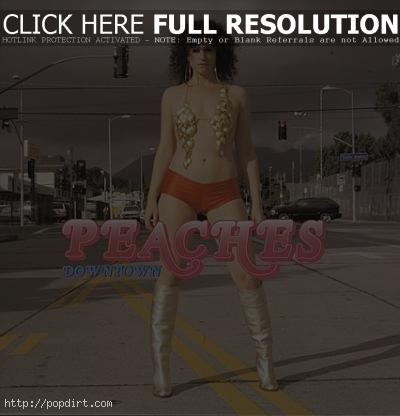 Peaches is out with the music video to her new single ‘Downtown’. The track is featured on the Canadian electronic artist’s third album ‘Impeach My Bush’, out now on XL. Watch it via YouTube below.

Peaches Says No To Britney Spears, Yes To Pink

Peaches has told RollingStone.com how Britney Spears asked her to do some songwriting for her next record, but the queen of electro-punk passed on the offer that many would have killed for. “I thought, ‘What can I write for her that they’re not gonna water down?'” she explained. But when Pink solicited the singer last month to contribute an intro rap to a song called ‘Oh My God’ on her next record, Peaches jumped at the chance. “She said, ‘This needs you on it!'” Peaches said. “I was psyched.”