Polly Scattergood checked in with fans on her blog at MySpace (@pollyscattergood) on Wednesday (July 28), discussing work on her second album, releasing her cover of ‘New York, New York’, and enjoying the sunshine. The British singer songwriter tells readers:

The good news is, it’s moving nicely, I have pretty much finished writing it, at the moment its all very fluid and exciting. Although everything in the early stages I have a strong idea of how I want it to sound, and I am very excited for the moment when I hear the sound waves slowly growing into the vision I have inside my head. I don’t want to say to much about how I hear it though, as don’t want to tie myself to anyone’s expectations, I want to be allowed to go to places I may not have even thought of yet, if that makes sense!

I don’t know when it will be out yet, at a guess I would say first half of next year!- So Please bare with me as I play in the studio bubble for a while. I promise not to loose myself for 3 years like I did with the first album!

And with my cover of New York New York,the artwork is done, and the track is ready to go, but I am just waiting to hear a release date from my record company. As soon as I know that I will let you all know!- Sorry I know it’s taking agers.

Behind the scenes footage from the making of the ‘Crysis 2’ video game’s the Wall Trailer has been posted online, featuring Polly Scattergood and an orchestra performing a cover of the Liza Minnelli and Frank Sinatra song ‘New York, New York’. “It was very much an organic process, where I saw these little sketches suddenly turn into this huge, epic picture and story,” the British singer songwriter says in the video. “And it was very exciting to watch and be a part of.” Watch it via YouTube below.

Polly also announced Friday that the song will get a release, telling fans on her MySpace blog:

Start spreading the news!
I can confirm that my cover of New York New York will be released!
I don’t have a official release date yet,but as soon as I do I will let you know!

Polly Scattergood updated fans on her blog at MySpace (@pollyscattergood) on Monday (April 26), discussing a song she wrote the previous night and the positive feedback she’s received for her cover of ‘New York, New York’ for the video game ‘Crysis 2’. Polly writes:

I wrote a song last night, very few songs have been coming out of my flat in the attic recently, for this new album I have written it everywhere except home… Berlin, little dolls house cottages, houses in the middle of nowhere,rooms at the center of everything… but last night I wrote a song at my own piano, in my home, it was quite a cathartic experience.

It took longer that usual, I pressed delete a few to many times, but then carried on. My friend Tom (who directed all the Pollyworld films) has been in Berlin buying a typewriter to type his new book on…

I like the idea of a typewriter having no delete button, it’s the mistakes that make art human, like brushes on canvas and ink on paper. I so often find imperfections far more interesting than perfectly finished creations.

My manager is talking 2my record company about possibly releasing my cover of New York New York, at some point, if enough people want it x

Polly Scattergood updated fans on her blog at MySpace (@pollyscattergood) on Sunday (January 10), discussing how her New Year’s Eve went, recording a song with Katie Melua, and starting work on her sophomore album. The Essex, England singer songwriter tells readers:

As some of you have guessed already from my Facebook & twitter posts I have also started writing my second album, which I am finding very exciting! I have been working with some fabulous people who are bringing lots of interesting elements to the mix. I can’t put a exact time things, as everything is creatively just at the very beginning but I have a small concept, which I will share with you if and when it works. I have some songs which I am happy with (and some which need more work)

Making a album is funny. I think some people imagine you go into a studio and it magically gets created and you step out at the end of the day with a small circular disk and your name on it! But the reality for me is many nights on my own, full of self doubt, spent writing songs, then scrapping them, then writing more! I guess I can only equate it to when you see actors in blockbusters, it looks so effortless and glamourous, but we never will see the sleepless nights when they are pacing up and down, learning lines the hard way!

Polly Scattergood checked in with fans on her blog at MySpace (@pollyscattergood) on Tuesday (September 15), talking about opening for The Dresden Dolls singer Amanda Palmer at two sold out shows in the Union Chapel, Islington on Friday and Saturday. The Essex, England singer songwriter tells readers:

Me and Amanda decided a while ago to do some songs together, so I sang a song of Amanda’s called Delilah and we also did Puff The Magic Dragon, which she played from the stage and I sang on a balcony above the stage to the right hand side. It was cool, definitely one of the best venues I have ever played in, in terms of atmosphere, and Amanda has a incredibly kind and friendly crowd. 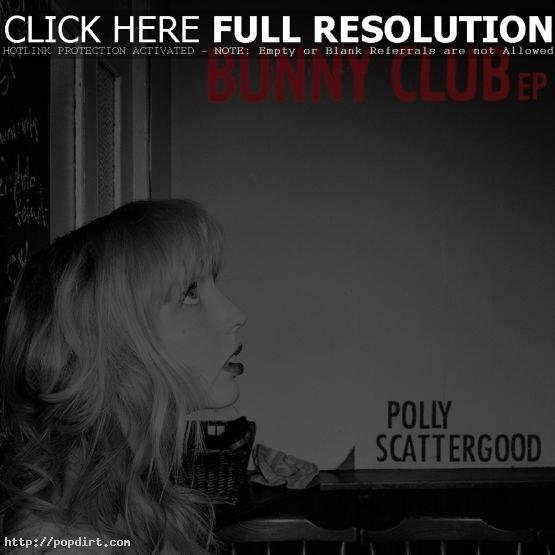 Polly Scattergood checked in with fans on her blog at MySpace (@pollyscattergood) on Tuesday (August 11), talking about how her new single will be ‘Bunny Club’, to be released early October as part of the ‘Bunny Club EP’. The Essex, England singer songwriter tells readers:

I am very excited, as it is a song that has been with me for a long time, and has moved and grown over the years. I felt very strongly I wanted it as the next single, as l love playing it live; I love seeing people dance and the reaction it gets. So for me it felt like a very obvious choice for the next single!

I hope you are happy with my decision!

Polly Scattergood checked in with fans on her blog at MySpace (@pollyscattergood) on Sunday (July 26), talking about troubles she had earlier in the day at the 1234 festival. Polly writes:

I played 1234 festival in Shoreditch today! Thanks so much 2those of you who came it was lovely seeing friendly faces in the crowd, everyone looked so cool and fashionable, I swear the people of Shoreditch must keep the skinny jean industry in business all year!- it was fabulous!

This is really a blog to say sorry to you all though, the festival was fabulous, but SO disorganized; I was told my stage time was 5.30pm then one hour before we arrived it got moved to 4.10pm, so at this point me and the boys where running seriously late! Then as result of the stage time being brought forward I had to miss a load of interviews which I had scheduled in (sorry to anyone I stood up). Then due to technical things my stage time was delayed, and as a result my set time was cut!-so had to pull Nitrogen Pink Last minute!

Hey Guys
I have some cool news to report….

(and you have a week to tell everyone you can think of!)

I have a live EP coming out on iTunes next week!

It was recorded at the Roundhouse gig, and I was mixing it yesterday, so everyone who was unable to get to the gig, can now have the live experience, we even mixed it so the keys come out of one speaker and the guitar out of another just like the stage set up, so if you close your eyes sound wise you could almost be there!

It has 5 tracks on it, I won’t reveal what they are yet, that can be a surprise!

I think it is out next Tuesday, but when I know what day next week for definite I will let you know!

Over n out
Polly xx

Polly Scattergood Gets Back To Her Roots With Irregular Choice Gig

Polly Scattergood updated fans on her blog at MySpace (@pollyscattergood) on Monday (June 15), talking about playing a show without her band. The English singer songwriter tells readers:

I am looking forward to playing a few stripped down acoustic songs tomorrow night at the “Irregular Choice” party “Night of Irregular Soles”. I haven’t played a gig just me and a piano, for years. It is like traveling back in time, I used to turn up at these venues such as 12 bar.

In Demark street and sometimes I would play to 3 people, 2 of them being the bar staff, the other being the guy on the door! I used to have the heaviest keyboard in the world, and the only way I could get it down from my flat was by sliding it down the stairs! Surprisingly enough it is still working, but I will be using my newer one tomorrow night, as it has had slightly less bumps and bruises so is a bit less temperamental!

So yeah I am looking forward to going back to the roots and playing 3 or 4 tracks as the skeletons they where,when they first set foot into my world. I will miss my band boys though, it can feel very lonely on stage without back up! Luckily tomorrow’s gig is in one of my favorite shops in London, Irregular Choice, and they have assured me there is no stage, just lots of pretty shoes and cute unicorn jumpers!