The Daily Telegraph reports ‘Australian Idol’ finalist Courtney Act said she and Paris Hilton’s then boyfriend and fellow ‘Idol’ finalist Rob Mills were on hand to watch ‘One Night In Paris’ with the heiress in May 2004. “There was talk of this Pam and Tommy-style video going around so Paris grabbed her publicist’s laptop,” Act said. “We typed it into Google and sat there and watched it. She didn’t know what to do. Millsy didn’t know what to do either because he wasn’t attuned to female embarrassment like I am. I commented that she looked great in night vision.”

July 27, 2006 – Paris spoke with The Glasgow Daily Record about switching things up on her debut album after initially working with Rob Cavallo, who discovered Green Day and has produced for Alanis Morissette. “We were recording a rock album and I wasn’t really feeling it,” she said. “I liked it. It was really good for rock music but I don’t listen to rock as much as I love hip hop and pop. So I met Scott Storch and changed the direction of the album from there. I made sure that there were no fillers. I think that most people only have the two hits and then the rest of the album sucks. So with me I wanted to make sure that every song is a smash. I really love ‘Nothing In This World’ with Dr Luke and ‘Turn You On’ – I think that says a lot about me.” The story at DailyRecord.co.uk has since been removed.

July 24, 2006 – Neil Sean of Sky News reports Christina is set to go head-to-head in the UK singles chart with Paris. Aguilera refused to change her ‘Ain’t No Other Man’ release date to avoid a clash with ‘Stars Are Blind’. “She is no competition, believe me,” Aguilera sniffed. “Talent will always win out.” But Hilton countered, “I have loved Christina since I was little but the time has come for something new. I am that (something new).”

July 24, 2006 – Paris was on with Lowie of Hot30 in Australia on Thursday (July 20) to promote her debut album ‘Paris’. She talked about collaborations, being prejudged, what the album’s about, psycho fans, being inspired by her grandfather – Hilton Hotel founder Conrad Hilton, her MySpace, and more. Lowie also mixed together an alternate interview with the questions’ he would have liked to ask. The 4-part interview and sketch at hot30.com has since been removed.

July 21, 2006 – Paris is set to release her self-titled debut album on August 22nd. Scott Storch, one of the album’s producers, told The Associated Press, “She has a certain tone that’s reminiscent of Cyndi Lauper and Blondie. The album doesn’t have one particular sound. It’s just good music; a combination of R&B, hip-hop and pop. It will surprise a lot of people because there’s real artistry coming from Paris.”

Paris Hilton At Privilege And Hyde

July 21, 2006 – Paris was videotaped outside Fat Joe’s concert at Privilege on Tuesday night (July 18) with pal Brandon Davis. The heiress later dropped by at Hyde before leaving with her sister Nicky. Lulop.com has since removed the video.

Rob Mills Apologizes His Way Out Of TV Show Ban

‘Australian Idol’ star Rob Mills has gotten himself banned from ‘Good Morning Australia’ with Bert Newton for skipping a scheduled appearance. Kyle and Jackie O of Austereo spoke with the producer of the show, and then Millsy phoned in to the program himself to apologize for his tardiness. By the end of the conversation, they lifted the ban. The interview has since been removed from kyleandjackieo.com.

Austereo DJ’s Kyle and Jackie O. played a phone prank on ‘Australian Idol’ and serial womanizer Rob Mills with a guy posing as a “father” of a woman he bedded named Anastacia, claiming his daughter was pregnant. Apparently the name of the woman was someone he actually had sex with, because Mills insisted he never had unprotected sex with her then later claimed he never had sex at all with her. Audio for the prank has since been removed from madwombat.com.

In Touch magazine reports that Paris Hilton is said to have spent the afternoon in Melbourne with Rob Mills while in Australia recently. Sources say the ‘Australian Idol’; spent several hours at Paris’ hotel, the Park Hyatt, on May 23rd. “If it wasn’t him, it was an as uncanny a look-alike as we’ve seen,” a source revealed. Hilton has since returned home into the arms of her primary squeeze, Backstreet Boys star Nick Carter.

The new popbitch.com newsletter reports that Paris Hilton renewed her “friendship” with ‘Australia Idol’ finalist Rob Mills last month when she was booked for an appearance at a St. Kilda nightclub in Melbourne. Part way through the event, the club manager walked into the night office and found Paris sitting on the edge of her desk, dress hitched up, with Millsy between her legs, performing oral contortions on the girlfriend of Backstreet Boys star Nick Carter. When the manager apologized for barging in on them, Paris barely looked up, graciously replying “That’s cool, we won’t be too long.”

June 10, 2004 – Paris Hilton was photographed leaving the Concord in tears as boyfriend Nick Carter of the Backstreet Boys went to another nightclub “with the guys” a few blocks away at the Spider Bar for the after party for the band Velvet Revolver in Hollywood, California on Wednesday (June 9).

Rob Mills, aka Milsy of ‘Australian Idol’ was on the Kyle and Jackie O radio show to promote his new album ‘Up All Night’, due June 14th. Mills said his parents are behind his music career, and they talked about the romance he had with Paris Hilton. They tried to convince Mills to get a Britney Spears style wedding with Paris, but he wasn’t keen to the idea. He said he’d recently met up with the current girlfriend of Backstreet Boys star Nick Carter, but denied they had sex. The 6-minute interview has since been removed from auspipe.com.

The Herald Sun reports that Paris Hilton and her sister Nicky Hilton, who arrived from the Gold Coast Saturday night, were due to head straight to the back bar of Darren Thornbergh’s Boutique Nightclub in Prahran. There, they were expected to join hand-picked guests including Paris’ brief fling Rob Mills of ‘Australian Idol’ fame, Kylie Minogue, and Delta Goodrem. Last week it was understood Paris would come to Melbourne with her boyfriend, Backstreet Boys star Boy Nick Carter. But apparently the long-distance lovers have had another tiff — and Nicky agreed to fly from New York to accompany her sister. This freed up the ever-observant Thornbergh to invite Millsy at the 11th hour.

May 9, 2004 – With Paris wearing a huge rock on her ring finger, some are wondering if she and Nick are engaged. But Paris’ rep. Gina Hoffman told In Touch Weekly: “It’s just a fad where everyone’s wearing a ring on their left hand. She and Nick are not engaged, but they’re doing well.”

While Paris Is Away, Paris Will Play

May 4, 2004 – Nick Carter’s worries that Paris Hilton would stray while in Australia appear to be well founded, as the Herald Sun reports the heiress was eyed partying it up at the Gold Coast at the weekend with Ian Thorpe and his teammates. The following night, Paris and Ian were again spotted together in bars along Surfers Paradise’s nightclub strip. 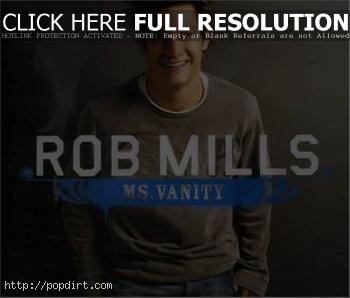 ‘Australian Idol’ finalist Rob Mills is out with the video to his first single ‘Ms Vanity’, set to appear on his debut album. Watch the video via Yahoo! Music below.