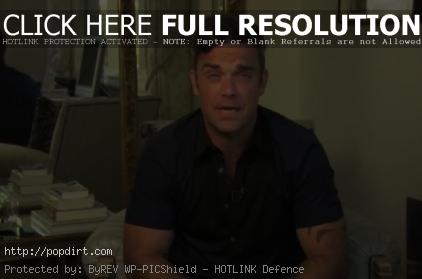 Robbie Williams and longtime girlfriend Ayda Field prepared to depart from Los Angeles International Airport on Wednesday (December 2). Despite denying rumors of an engagement, it seems Field took the extra precaution to keep her left hand hidden from the cameras. 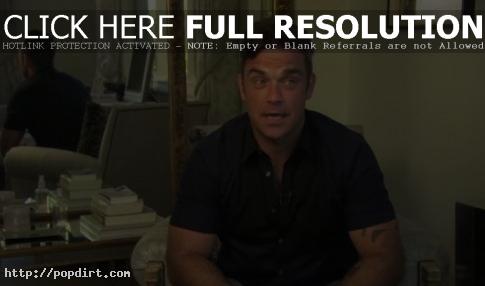 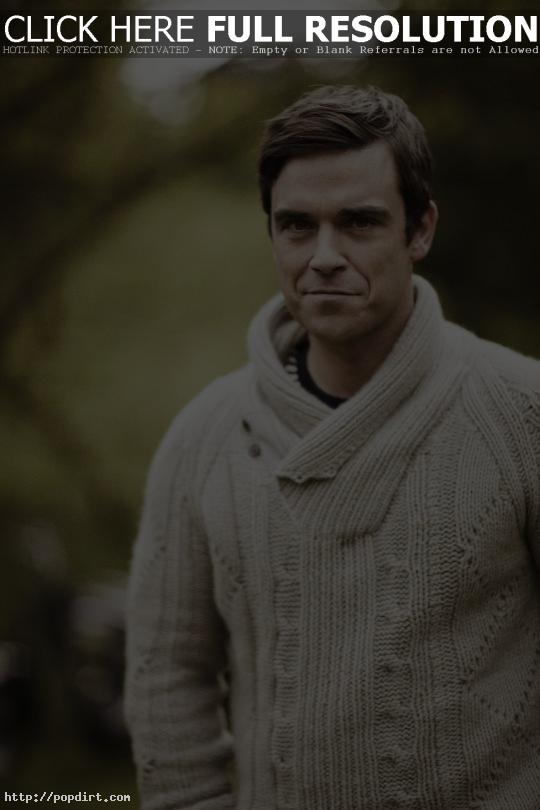 In his latest blog, Robbie Williams reveals the truth about that radio moment in Australia where he supposedly proposed to girlfriend Ayda Field. The British pop star writes:

We are not engaged 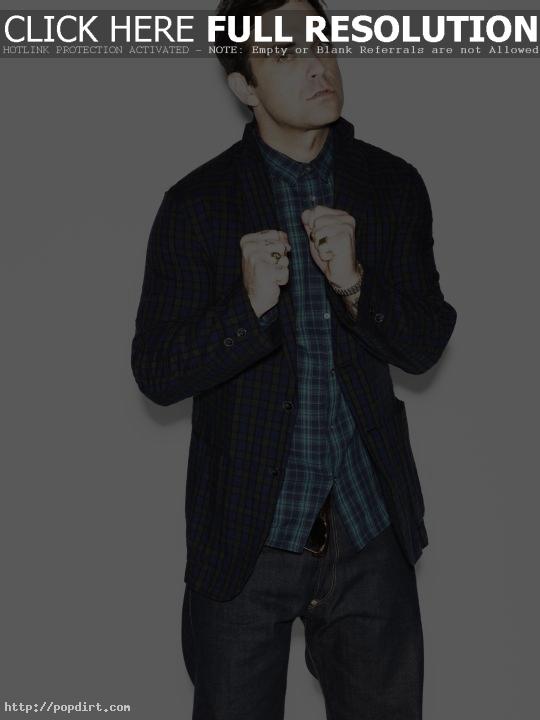 Robbie Williams checked in with fans on his official web site, RobbieWilliams.com, on Tuesday (November 17), discussing the success of his new album ‘Reality Killed the Video Star’, which debuted at #2 on the UK albums chart, his first to not to land on top. Robbie writes:

What a Brilliant week…. The children in need gig was the most fun I’ve had in a long time… So was loose women Such a nice vibe back stage…

I called Marvin to talk to the JLS boys and sent my congratulations. They were
really chuffed and it made me feel good for them… I was semi gutted for half an hour because I know how hard everyone’s worked… from EMI to Management to all of you that supported me and bought the record….

Thank you, thank you thank you……

and thank you x

P.S I get the feeling for the most part you really dig the album.. and that’s the best part of my job right there…… ; )

November 14, 2009 – During a Radio 2 interview to be broadcast on Christmas Day, Robbie Williams says he has already recorded new songs with his former bandmates Take That. “Oh sod it, we’ve been in and the songs are absolutely amazing,” the 35-year-old said. It’s unknown whether the songs would be released.

Robbie Williams ‘You Know Me’ Video

Robbie Williams is out with the music video to his new single ‘You Know Me’, off the British pop singer’s upcoming album ‘Reality Killed The Video Star’, out Monday (November 9) on EMI. The song is based on an original song ‘Voilà’, written by French artist Françoise Hardy.

The Phil & Olly directed video was filmed at Shepperton Studios and features Williams dressed as a rabbit a la ‘Alice in Wonderland’.

Watch it and behind the scenes footage from the video shoot via YouTube below.

October 25, 2009 – 50 Cent talked with ITN about Robbie Williams’s outstanding contribution honor from the Brits and plans to work with him. “Robbie Williams is a great artist,” the G-Unit mainman said. “I actually tried to work with him during the Curtis album, but at that point he was going to rehab, so it just didn’t work out with the timing, but I wanted to work with in in the early days in my career. If the concept of a song comes up, I’d reach out to him.” Watch the comments below.

October 21, 2009 – Robbie Williams checked in with fans on his official web site, celebrating the success of his new single ‘Bodies’. The British pop singer writes: 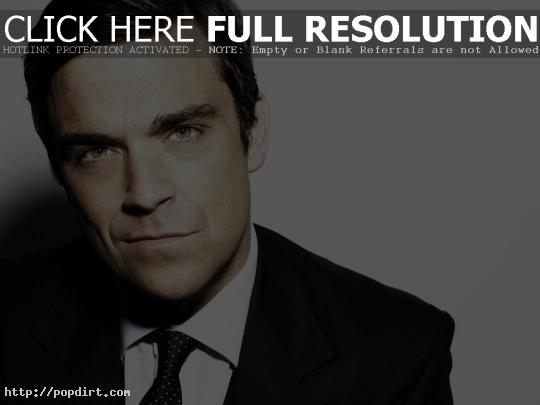 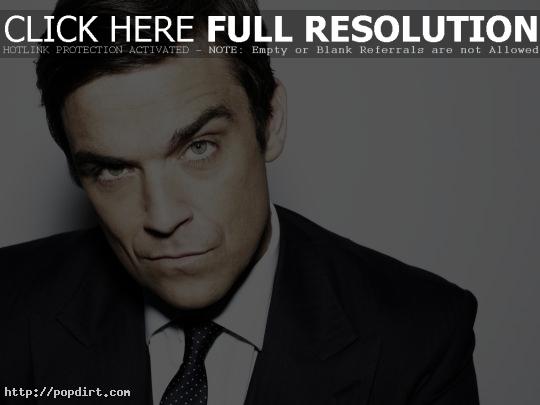 I’m really happy..the interviews went really well.. I’m a bit more laid back than I’ve been in the past… Maybe age catching up on me…

I did about 10 interviews yesterday, which you’ll hear on a station near you soon, and the response I’m getting for Bodies from people has been really encouraging.. It all seems to be very genuine too…

I didn’t expect to be welcomed back with such enthusiasm…

what a good day…

August 21, 2009 – Robbie Williams has invited girlfriend Ayda Field’s mother Gwen to move in with the couple at the singer’s mansion in Wiltshire. “Robbie has really hit it off with Ayda’s mum. One of his hobbies is playing poker with a small group of pals including his mate Jonathan Wilkes,” a friend told The Sun. “Gwen has joined in a few times, and on a couple of occasions Robbie and Gwen have carried on playing into the wee small hours after everyone else went to bed.” 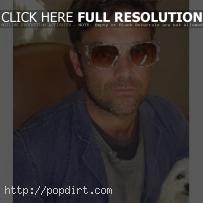 In Robbie Williams’ latest blog at MySpace (@robbiewilliamsofficial), the singer talked about dogs, beards and singing Olympics. The former Take That star writes:

I’m listening to the new Pet Shop Boys album ‘Yes’
‘All Over The World’ and ‘Beautiful People’ are my favs at the mo….

Been working with Trevor at Capitol Records here in LA…
Once again,blown away with what he’s doing…

Robbie Williams: Story I Was Rejoining Take That Was Made Up

April 1, 2009 – Robbie Williams checked in with fans on his official web site, robbiewilliams.com, revealing that reports he was planning on a return to Take That in an interview with a UK tabloid were “totally made up” and that the only thing he said to the lady he posed in a picture with who ended up being a tabloid writer who claimed to have the interview was “sure” in response to whether he’d pose for the image. “The boys have their thing going and so do I,” Robbie explained.

Robbie Williams was photographed going to the recording studio in London’s Notting Hill district with a spiked hairstyle reminiscent of ‘There’s Something About Mary’ on Tuesday (March 31). Pictures from bauergriffinonline.com have since been removed.

Robbie Won’t Be Back With Take That Anytime Soon

March 30, 2009 – The Sun spoke with Gary Barlow about reports suggesting Robbie Williams was ready to reunite with his Take That bandmates soon, prompting Gary to respond, “Quick. Where’s my phone? … I’ve heard Robbie say that 50 times. We keep answering the same way. We’d all love to do something but Rob’s in the studio making an album and we’re on tour in the summer. It will happen, I just don’t know when.”

Though Robbie Williams was able to convince his girlfriend Ayda Field to move with him to Britain, the model has become restless and wants to return to Los Angeles. “He stays home most of the time and only wants to go out for the football or to play poker,” a source tells News of the World. “She feels isolated and misses her friends and lifestyle. She wants to go back to LA and has asked him to come with her. And if Robbie says no then she’s prepared to call time on the relationship.”

Robbie Has Plenty Of Free Time On His Hands

February 26, 2009 – Robbie Williams has moved back to the UK, and popbitch.com hears the former Take That star signed up with the local dentist. They hear the 35-year-old, who had been looking scruffy last year, is now looking “sort of fit again”. They add when the dentist’s receptionist told him they would make special arrangements to work with his busy schedule, Robbie responded, “Oh no, I have absolutely nothing going on at the moment, I’m really free.”

Robbie Gets Into Poker

February 23, 2009 – The Sun hears that Robbie Williams has been slumming it in Swindon at the Premier Club’s poker nights, often joined by pal Jonathan Wilkes. “Robbie has been in frequently over the last few weeks,” a source told the British tabloid. “He plays to a very high standard and has been having fun with Jonathan. He’s getting a reputation as a serious adversary around the poker tables here.”