Sabrina Bryan will grace the ‘Dancing with the Stars’ dance floor in ABC’s ‘Design a Dance’. The former Cheetah Girl spoke with the show’s host Tom Bergeron about the opportunity. Bryan told her MySpace followers:

Wow I’m still in a daze. I haven’t been this excited for the longest time. I’m so grateful and honored that you all voted…I promise it’s going to be amazing! I’m sooooo ready to tear up the dance floor!! Can’t wait to start rehearsing!!! Make sure you vote for whoever you want me to dance with….so excited to see who you guys pick!! Xoxo muah!

Watch the ‘DWTS’ appearance below.

Sabrina Bryan Reports On ‘Dancing With The Stars’ Week 2

Sabrina Bryan reported backstage at ‘Dancing with the Stars’ week 2 for ABC. The former Cheetah Girls member reviewed the week two dance routines, talked with fans about their favorite performances, and hung out with Cheryl Burke before they announced Kathy Ireland and Tony Dovolani were eliminated. Watch it below.

Sabrina Bryan Talks ‘Dancing With The Stars’ With ‘Reality Chat’

‘Dancing with the Stars’ alum and former Cheetah Girl Sabrina Bryan visited the ladies from TV Guide’s ‘Reality Chat’ and offered her informed opinion on the remaining ‘DWTS’ contestants’ moves.

Sabrina said she’s been amazed by Lil Kim’s growth so far and how it’s nice to see a different side of her, while she said Shaun Johnson has a lot of pressure to be age appropriate being under 18, hoping she lets loose if she makes it to the finals.

Sabrina also talked about her book ‘Princess of Gossip’. “I had an idea that came up actually through MySpace,” Bryan said of the project. “It was just an idea to kind of create what would be a really young Perez Hilton.” The interview at YouTube has since been removed.

Sabrina Bryan is a part of the empowerME Movement, a by kids, for kids movement that’s inspiring all kids to make healthy behavior changes and to become leaders and advocates for healthy eating and physical activity. Join the Movement at empowerme2b.org.

In the PSA, Sabrina advises kids to get 60 minutes of physical activity a day, drink mainly water, eat fruits and vegetables with every meal, limit computer/TV time to 1-2 hours a day, and get at least 9 hours of sleep every night.

Sabrina Bryan showed off her piano skills (or not) in a video posted at the former Cheetah Girls’ YouTube channel. “I promised I would keep the the love coming and I have something for you,” Bryan writes on her blog at MySpace (@sabrinabryan?). “My friend Rye and I love to goof around. I hung out with his family for the St. Patty’s Day weekend and had soooo much fun. He and his mom were showing me around and I stumbled on this piano and instantly had an idea for a video!!! Hope you guys like it. I have lots more so keep checking in… muah!!!” Watch it below. 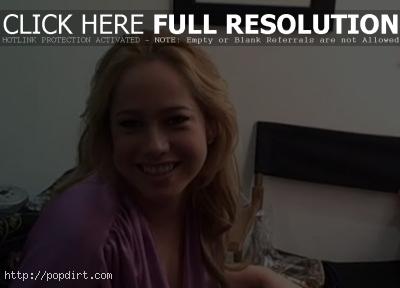 Sabrina Bryan Preps For ‘Dancing With The Stars’ Premiere

Sabrina Bryan updated fans on her blog at MySpace (@sabrinabryan) just before heading to the ‘Dancing with the Stars’ season premiere. The former Cheetah Girl and ‘DWTS’ alum tells readers:

I’m sitting in the hair and makeup chair over at E! getting ready to go the premiere night of Dancing With the Stars!!! I’m hosting the red carpet after the show and I seriously can’t wait to grill some of my friends like Cheryl and Kim…of course Maks!!! Haha! It will be fun to be back at the show and see how the new cast is…I’m interested to see who is replacing Jewel and Nancy. Should be interesting!!! Well I’m on my way…wish me luck!!!

Former Cheetah Girls star Sabrina Bryan was on hand for the Super Bowl on February 1st in Tampa, Florida, cheering on the Pittsburgh Steelers while sitting in the Arizona Cardinals endzone.

“For those of you that don’t know sports are HUGE to me,” Sabrina writes on her MySpace blog (@sabrinabryan). “I love pretty much all of them!! Ahaahahaah!!!! Anyway I was able to score some amazing tickets to the Super Bowl this year and it was AMAZING!!! I was in the Cardinals end zone which I have to admit I was complaining about just a little since I was going for the Steelers… BUT it ended paying off cause I was in the exact end zone that the last touchdown was amazingly achieved by our incredible team!!!”

Watch her footage from the game below.

Sabrina Bryan checked in with fans on her blog at MySpace (@sabrinabryan) on Wednesday (February 18), talking about her visit earlier in the day to a middle school to teach the kids some moves from her dance workout DVD ‘BYou’. The former Cheetah Girls star tells readers:

I did a PSA for empowerME today!!! I was a lot of fun. I got to go to a middle school and teach them some of the brand new BYou moves from my new DVD!!!

The kids were amazing and so excited to learn the dance moves. At first, I saw the amount of boys in the audience and I wasn’t sure if they would like it. But as soon as I started, they were all into it and it pumped me up for sure! I had a great time breaking down all of the moves and making sure they were loving it as much as I was. I could tell that not all of them have had a lot training (or any at all!) I had the opportunity to open their eyes to having fun with just moving your body…..dancing is amazing and as I’ve learned throughout the year there are so many different kind of ways to dance!!!!

Sabrina Bryan answered six questions submitted from fans on her official web site, including who her role model is. The Cheetah Girls star responded:

Ok I’m not trying to sound corny but honestly my parents are my biggest role models. I hope one day I’m at least half as good as at being a parent as they are.

If I chose someone professionally it would have to be a tie between Drew Barrymore and Gwen Stefani. I would love to produce movies and chose the ones to be in the way Drew has successfully done for years. I really look up to how Gwen has managed to balance her career involving a clothing line and a family. They’re both amazing and I hope to one day get the chance to work with them.

Check out the other five questions here.