Bob Stanley of Saint Etienne checked in with fans on the group’s blog at MySpace (@saintetienne) on Wednesday (November 3), remembering the life of Edinburgh Evening News journalist Andrew Midgley, who died October 28th at the age of 45 after collapsing at the gym. Stanley writes:

It’s very hard to believe that Andrew Midgley, the pop art terrorist also known as Boy Naughty, is no longer about. He died last Tuesday after he’d been at the gym. The gym! Safe to say he’d have thought that was about the daftest way he could have gone.

I met him when I was working at Virgin Records in Peterborough in 1985. Customers’ tastes ranged from number one in the chart to number two in the chart, it was a pretty uninspiring job. So when this skinny kid walked in looking like a brylcreemed Kenneth Williams and asked for the Primal Scream single (their first one) it was quite a shock, and I pounced on him. It turned out he lived up the road from me so we went for a pint and I met his gang of mates – Andrew, Bobby and Chris – who would help to make my life a lot more interesting and a lot more fun.

He got me into a ton of new music, especially the coalescing C86 scene, at a time when I was listening to Roy Orbison, John Barry, and almost nothing new. He even changed my name; because there was already a Bobby in the Peterborough gang I became Stan. We’d go to gigs in Bedford and Lincoln, and Naughty would heap cheeky abuse on ratty indie support acts and below par soundmen. But he was more excited at the prospect of Frankie Howerd or Norman Wisdom coming to town (I saw the former but skipped the latter, to my shame). He laughed like Syd James, and he laughed a lot.

Bob Stanley of Saint Etienne checked in with fans on the group’s blog at MySpace (@saintetienne) on Wednesday (April 7), revealing that they won’t be submitting a song to be the World Cup theme. He writes:

Well, we’re pulling out of the race to record a World Cup song. Bit late, too many rivals, struggling to think of something that rhymes with Fabio. And it’s hard to feel much kinship with the cuddly likes of Defoe, Terry, Lampard, the ex Mr Cheryl Cole etc. Besides, we did it once before, 20 years ago (deary me, is it really that long?).

Sarah Cracknell of Saint Etienne checked in with fans on the English indie dance act’s blog at MySpace (@saintetienne) on Wednesday (October 21), thanking concertgoers at their Manchester and London shows for showing support as she struggled with a throat infection. Sarah writes:

I just wanted to say a massive thank you to everyone who came to see us play last week in Manchester and London. You probably realized that by the Manchester show I’d developed a nasty throat infection which was affecting my singing voice and I was very nervous before going on stage in London. Thank you all for giving me much needed moral support – it kept me going. The sing along during Hobart Paving really touched Bob, Pete and I and we had a fantastic time. That’s probably it for live shows this year but we promise to be back in 2010.
Thank goodness for Sandersons Throat Specific, that’s all I can say!!!

Saint Etienne updated fans on their blog at MySpace (@saintetienne) on Monday (June 15), reacting to the death of Clive Scott. The British alternative pop group write:

We’re sad to hear about the passing of Clive Scott who, with Des Dyer, co-wrote one of our most popular songs, ‘Who Do You Think You Are’. They also wrote Jigsaw’s ‘Sky High’, another mid-70s pop classic which we have always had on the permanent playlists in our head. When we did ‘WDYTYA’ on ‘Top Of The Pops’, Clive and Des sent a massive bouquet and a ‘good luck’ note to the BBC studio. We never met, but that was a wonderful thing to do, and we’ve never forgotten. 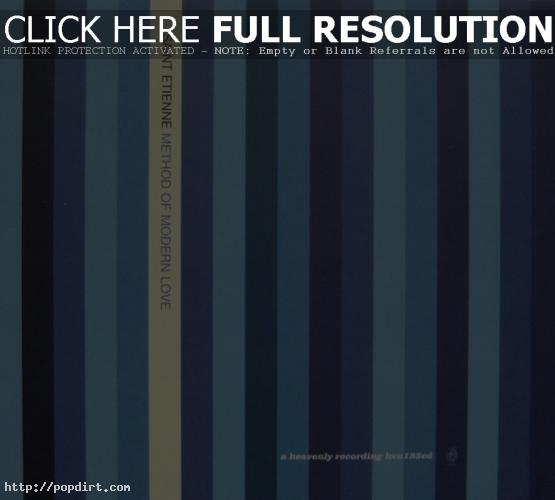 Bob Stanley of Saint Etienne checked in with fans on the group’s blog at MySpace (@saintetienne) on Friday (February 6), talking about the prospects for their new single ‘Method of Modern Love’. Stanley tells readers:

We’re hopeful that Method Of Modern Love might nudge the Top 40 next week. Everything’s crossed. Buy one for your mum!

Chances are it won’t be number one. I’ve undertaken a project to listen to every number one from this decade, one a day. It started ignominiously with Westlife’s I Have A Dream, and has so far included one song of which I have no recollection (Geri Halliwell’s Bag It Up, presumably a warning to dog walkers). Yesterday it was Oxide & Neutrino’s Bound 4 Da Reload which sounds brilliant and hilarious at 9 years distance. Probably just as well we’re snowed out of the studio today, or who knows what retro-futurist direction we’d be heading in.