Same Difference checked in with fans on their blog at MySpace (@samedifferenceworld) on Tuesday (June 29) to chronicle how things went when they filmed the music video for ‘Shine on Forever (Photo Frame)’. Sean and Sarah Smith write:

We recently shot the music video for our brand new single “Shine on Forever (Photo Frame)” and although we filmed behind the scenes for all of you guys to get the full experience (video blog coming soon!!) We thought we would write a blog to let you know all about our day.

For weeks we had been planning the video day. Everything from choreography to styling, directors to venues was ready.

The night before the big day we had a fitting at our hotel in London. This was so exciting as there were so many amazing clothes and shoes to pick from. 3 hours (and 1zillion) outfits later we had picked our favorites for the shoot..

We never slept a wink the night before as we knew that we had to be up at 5 ready to be at the venue for 6!

The venue was called the lightbox and basically did what is said on the tin…. A room covered in lights! It was spectacular and we were so excited when we walked in and saw all of the people there ready to make our video! 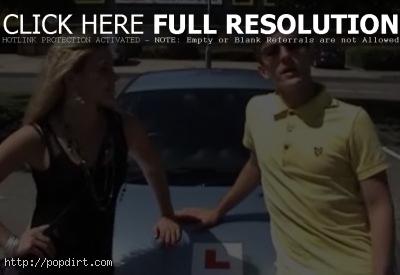 Sean Smith of Same Difference taught her sister and bandmate Sarah to drive in a video at ‘The X Factor’ duo’s MySpace.

“Hello everybody, we are here today for Sarah’s first ever driving lesson with a brand new driving instructor, me,” Sean said. “Sarah, I’ve told you already, you need to relax, keep it calm, because I’m the calmest, most coolest driving teacher in the history of the world. We’ll have you on the road in no time.”

Check out how Sarah handles the stick shift below.

Same Difference checked in with fans on their blog at MySpace (@samedifferenceworld) on Tuesday (December 23). ‘The X Factor’ alums write:

Your support this year,
Has been the best!
To have a fan like you,
We are truly blessed!
Just a little message,
To spread winter cheer!
To say happy Xmas,
And a “POP”ing new year!
May all of your xmas dreams come true!

‘The X Factor’ season four sibling duo Same Difference are out with ‘Pop The Game’ to coincide with the release of their debut album ‘Pop’. The aim of the game is to pop as many balloons as you can in 30 seconds, with different points being allocated for pink and orange balloons. The highest score so far in SD Towers has been 70 points. Play the game at samedifferenceworld.com.

Same Difference Stay At Brian McFadden’s Home While In London

Sarah Smith of sibling pop duo Same Difference tells The Mirror she and her brother Sean have developed a good friendship with former Westlife star Brian McFadden and his Australian pop star girlfriend Delta Goodrem. “Brian lets us stay in his place when we’re in London. He’s an amazing guy, really nice,” ‘X Factor’ star Sarah said. “Brian and Delta have mentored us through the recording of our album.” Same Difference release their debut album ‘Pop’ on Monday.

‘The X Factor’ third place finishers Same Difference dropped by Radio City 96.7 in Liverpool, England, talking about their experience on the show. Siblings Sean and Sarah Smith said they were happy to be mentored by Simon Cowell and admitted the show’s judges have a big influence on the voting public.

“He’s the person where it’s his show, so he’s got the upper hand, where if he wants to make you look really, really great he can. At least he’s on your side,” Sarah said about Simon.

Talking about their ‘High School Musical’ track ‘Breaking Free’, Sean said, “It put us on the map, that song. The first one was ‘Here Or There’, it was one of those songs that kind of managed to get us through, one of the worst, we were nowhere near the best, that kind of thing. Then that song just kind of gave us our audience that we kept with us the whole time. It’s worked for us so far, just fingers crossed when the single and album come out that they stick by us.”