Sanjaya Malakar of ‘American Idol’ season six visited ‘American Morning’ earlier to discuss the controversy surrounding Bristol Palin on ‘Dancing With the Stars’, and whether she deserves to be competing in the finale of the ABC hit tonight. “It’s hard to judge her against someone else who may have had some dance background, or may just naturally have a little more dance ability,” Sanjaya said about Sarah Palin’s daughter. Watch the segment below.

Q13.com reports Sanjaya Malakar was hit with a $411 ticket for going 110-miles an hour down 405 in Kirkland, Washington early Tuesday morning. The ‘American Idol’ season six finalist was headed southbound on I-405 when a trooper clocked him going 50-miles over the speed limit. Sanjaya was driving a 2008 Mazda 6 and was able to escape a reckless endangerment arrest when the officer finally caught up to him only because no one else was on the freeway.

Sorry it’s been so long since I’ve written to you guys. I’ve been really busy this last few months. As some of you may have heard, my EP and my book came out on amazon.com on January 20th. I’ve been doing a lot of promotion for that as well as continuing to work in the studio. The EP has five songs that I wrote with a few co-writers including my sister, Shyamali and my cousin, Camila. I’m working with a producer here in New York named Gary Haase. He’s been helping me to capture the world sound that I put in my music, but also comfortably fuse that with hints of R&B, Jazz, and Rock. He’s introduced me to extremely talented local writers and musicians. Everyone has made this time so much fun and I’m really proud to be able to call myself an author and an artist.

‘American Idol’ season six finalist Sanjaya Malakar received a video message from the show’s judge Simon Cowell. “Hello, Sanjaya. In a strange way, I sort of miss you,” Cowell said. “I’m not going to ask you to reapply, but I look forward to seeing you real soon.” A surprised Sanjaya replied, “Well, thank you, Simon, I kind of miss you too!” Malakar also talked about his new commercial for Nationwide Mutual Insurance, following in the footsteps of Kevin Federline. Watch the segment at extratv.warnerbros.com.

The Hartford Courant caught up with Sanjaya Malakar in a Q&A, where the ‘American Idol’ season six finalist revealed he’s “cutting some music now in New York and expecting to release it at the end of this year or early 2009.” The 18-year-old also revealed he’s off the market. Asked if he had a girlfriend, Sanjaya responded, “Ummmm, yes. She is supportive and understands that I am not always going to be in the same state as her. She stands behind me. She is in school and when she finishes we’ll see where it goes.”

The full story at courant.com has since been removed.

‘Access Hollywood’ caught up with season six ‘American Idol’ finalist Sanjaya Malakar to discuss his hair, visiting New Zealand after last year’s ‘Idol’ tour, plans for the future and what it’s like living with his sister in Los Angeles. Watch the interview below.

PageSix.com hears that ‘American Idol’ season six finalist Sanjaya Malakar and his sister Shyamali are in talks with MTV to headline their own variety TV series called ‘The Sanjaya and Shyamali Show’. His manager Suzy Sachs said, “He has a huge following and a background in musical theater.” Not only that, but Sachs said Sanjaya is “in rehearsals for a new album” and has been working with famous vocal coach Seth Riggs. Asked how the sessions with Riggs have gone, Sachs said, “He did very well. I wish I could have done what he’s doing at 18-years-old.” 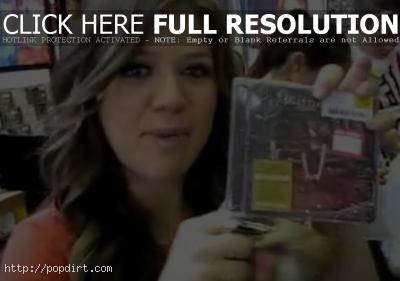 ‘RTL Boulevard’ profiled Kelly Clarkson on Friday (December 21). Clarkson talked about her experience winning the first season of ‘American Idol’ saying, “‘Idol’ is great. I had such a good time on the show. It was a good breakthrough for me because I like a lot of types of music. It’s the story of anybody trying to make it. You know, there’s that one break you get that ends up being the story that’s talked about through your whole career. So, it’s cool, I’m very thankful for it.”

As for her troubles finding a guy, the 25-year-old said, “I’ve just never been in love. I think people throw the term ‘love’ around too much. I think it’s pretty sacred. So I don’t say that too often.”

Clarkson also commented on other young singers who have experienced difficulties in their personal lives like Amy Winehouse and Lindsay Lohan. “I think God kind of put me through a lot of tests when I was younger just to make sure I’d be able to handle this, because this is a lot. I mean, people make fun of other people my age in the industry that are doing whatever they want to do and it may look like they’re going crazy, but, I mean, how many normal people my age do you see going crazy that aren’t in the spotlight. It happens. It’s called being young.”

December 14, 2007 – ‘American Idol’ producer Nigel Lythgoe told Usmagazine.com that the show’s invite to Britney Spears to appear last year won’t be repeated for season seven. “I would have had Britney Spears last year when I thought she was trying to get it all back together again,” Lythgoe said. “Britney, at this moment in time, I don’t think is well enough to do anything. I think she needs looking after. I think she needs to pull herself together.” The ‘Idol’ series 2-night, 4-hour series premiere takes place January 15-16 on FOX.

December 6, 2007 – Why is everyone so excited about season seven of ‘America Idol’? Ryan Seacrest, Paula Abdul, and Randy Jackson are gushing to Fox News Channel’s Anita Vogel about the talent in the new season. They also talk about how Simon Cowell is getting along with his fellow judges this year. Video at FoxNews.com has since been removed.

WannaBe Idolz ‘I Wanna Be Blake (I Wanna Be Sanjaya)’ Audio

November 28, 2007 – ‘Christmas In The Northwest 10’ features a song dedicated to Seattle area ‘American Idol’ season six finalists Blake Lewis and Sanjaya Malakar. Since 1985, ‘Christmas in the Northwest’ artists have been lighting up the holidays, and raising money for Children’s Hospitals through the sale of the ‘Christmas in the Northwest’ CD series. Audio of ‘I Wanna Be Blake (I Wanna Be Sanjaya)’, performed by the WannaBe Idolz, at myspace.com/christmasinthenorthwest has since been removed.

‘American Idol’ season six finalist Sanjaya Malakar was on the phone with Jeff & Jer Showgram of Star 94.1 FM in San Diego on June 6th. He talked about the upcoming ‘Idol’ tour, what he’s been doing since ‘Idol’, cleaning his bedroom, wishing he had time for a love life, and what’s in his bedroom.

Sanjaya Malakar Talks With The Mikey Show, Gets Slammed Afterwards

The Mikey Show on Rock 105.3 FM in San Diego interviewed ‘American Idol’ season six finalist Sanjaya Malakar on Wednesday (June 6). He talked about the Bill Vendall prank, the noises in his room, if he thought he would ever win ‘Idol’, feeling it was tacky and juvenile how people handled the story of her mother’s marijuana arrest, what’s next for him, and his celebrity mentors. Afterwards, they all gave him a hard time and assumed he was stoned during the interview because he was having a hard time forming sentences, was soft-spoken and mumbling, and seemed distracted – which is typical of most Sanjaya interviews.