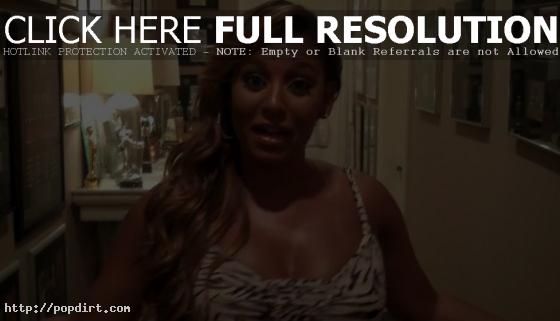 Melanie Brown checked in with fans on her YouTube channel to mark the Spice Girls’ 15th anniversary of their first single ‘Wannabe’ being released. ‘Wannabe’ was by far the British girl group’s most successful single, reaching #1 in America, the UK, France, Germany and just about everywhere else.

According to BANG Showbiz, Melanie Chisholm says she’d be part of another Spice Girls reunion if they were asked to play at the 2012 London Olympics, rejoining her bandmates Victoria Beckham, Melanie Brown, Emma Bunton and Geri Haliwell for the games. “We’ve never actually been approached about the Olympics and it’s just rumors at the moment unfortunately but I’d jump at it if we were asked,” Mel C said. “I’m very excited about the Olympics being here in London. And it’d get me in wouldn’t it because I’ve got no tickets.”

March 22, 2010 – Melanie Chisholm spoke with ITN at the Olivier Awards about her excitement for the Spice Girls Musical, but admitted they are still looking for writers. “It’s happening, it’s absolutely happening,” Mel said of the project. “We’re working with Judy Craymer, who’s very famous for her successes with ‘Mamma Mia’, the stage production and the movie. So we thought she was a great person to help us get our dreams up on the West End stage.”

The singer added, “We’re currently looking for writers for the piece, and we really wanna be involved in as much as we want people to know us and experience the chemistry between us girls. We want to give lots of anecdotes. So even though we want it to be a fictional story, we want lots of the Spice Girls essence to go through there.” Watch the remarks via YouTube below.

March 3, 2010 – Melanie Chisholm talked about how hard it is working in theater for her role in ‘Blood Brothers’ and offered details about ‘Spice Girls: The Musical’ in an interview with reporters. “So excited, very early stages,” Mel said of the Spice Girls project. “We’re very excited, we’re meeting right at the moment. Judy Craymer is the producer, who was famously successful with ‘Mama Mia’, both the musical and the film, so we’re just hoping for great things. We want our music to live on to be able to be enjoyed by our fans for many years to come.” Watch the comments via ITN’s YouTube channel below.

Former Spice Girl Melanie Brown is releasing a workout video. The ‘Dancing with the Stars’ contestant spoke with Fox News Channel about ‘Totally Fit’. “Who wants to go to a gym and try to figure out machinery,” Mel B said. “I’ve actually created a DVD workout program where you can use household items like water bottles or cans of soup or broomsticks or a mop. To just make it more affordable so it makes sense for you, and me.” Brown added that following their recent reunion tour, she doubts the Spice Girls will reunite again, but “we’re all really good friends.”

The interview video at FoxNews.com has since been removed.

Geri Halliwell spoke with Fabulous magazine about reports suggesting a renewed rift in the Spice Girls camp after they weren’t invited to Mel B’s marriage blessing in Egypt. “We all still speak, and the tour resolved loads of things,” she said. “I see Victoria when I’m in LA, and we’re all delighted about Mel’s blessing. I don’t know about another reunion. I’d never say never.”

Geri also spoke of her role as a reality show judge and getting a key member of the group following in the Spice Girls footsteps – Girls Aloud. “I’m so proud of Cheryl Cole,” she says. “I’m the one who basically picked her on ‘Popstars: The Rivals’ – I really fought to put her through. I love that I opened that little window of opportunity for her and how she’s run with it.”

Read more and check out pictures at fabulousmag.co.uk.

August 2, 2008 – In a column for the Times of London, Geri Halliwell opened up about how watching the ‘Sex and the City’ movie “made me laugh, made me cry”, and made her feel “quite traumatized”. The 35-year-old singer writes, “In a way, seeing the four women in ‘Sex and the City’ and how the story of their lives has moved on reminded me of the Spice Girls and how we’ve moved on. The Spice Girls reunion tour was a very healing experience for me. It put to bed every bit of doubt, guilt, insecurity I had about leaving the girls when I did. I felt I’d made amends with them, come away with a sense of completion about that chapter in my life.”

The entire story at timesonline.co.uk has since been archived.

Spice Girls Wrap Up Reunion Tour With ‘Mama’ In Toronto 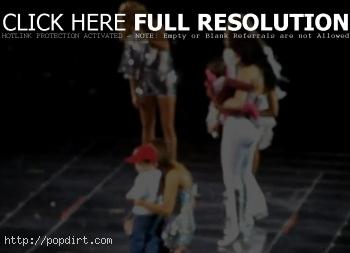 Victoria Beckham’s son Cruz did another breakdance during the Spice Girls performance of ‘Mama’ in Toronto after a final and emotional walk together down the catwalk on February 26th at the Air Canada Centre.

Also getting on stage was Melanie Brown’s youngest daughter Angel, who sat on stage with her mother, and Emma Bunton, who was joined by her son Beau.

Watch footage, ending with a group hug, via YouTube below. 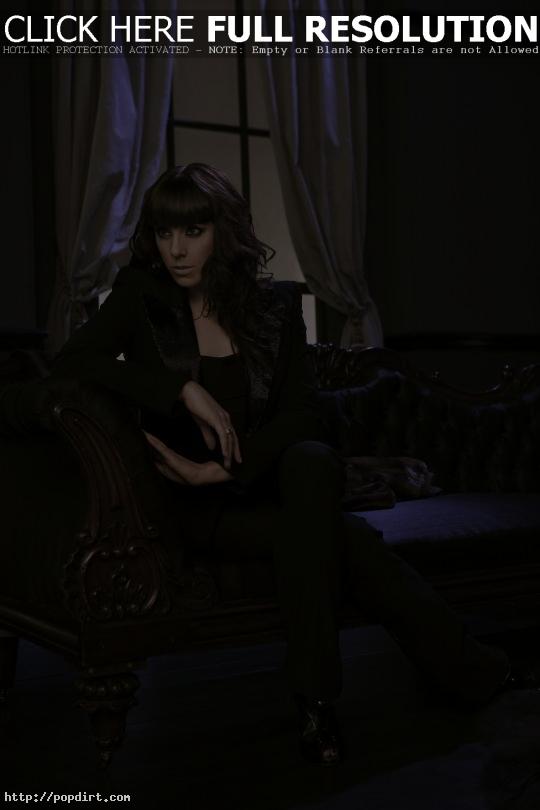 Conan O’Brien joked during his Late Night monologue on Tuesday night, “The Spice Girls say they want to play for Nelson Mandela’s 90 birthday party. When Mandela heard this, he said, ‘No thanks, I’d rather go back to prison.'”

Geri Halliwell checked in with fans on the Spice Girls blog after the British girl group’s performance at Madison Square Garden in New York City. She writes:

So we’ve just played Madison Square Garden and it was amazing. We finally did it as a five piece (the girls did it once before after I left) and I feel so delighted… mission almost accomplished. The energy and atmosphere were amazing.

Victoria’s son Cruz was a little star. We all had our children up on stage tonight and Cruz started break dancing [Watch it below the fold]! How cool is that? It’s clearly in the family.

So, we have got six shows left to do and it’s rather like a countdown. I feel a mixture of sadness and joy. I know it’s time to come home yet I will miss everyone from the tour.

I love New York so, so much and I have had a blast here. I hit the ground running… enjoying the nightlife, the vintage shopping, the food and the people. I am in love with New York. I feel like I found a part of me that I had kind of forgotten. The Statue Of Liberty is in view as I write this and she certainly has Girl Power. New York has been liberating.

I’ve also been exposed to the world of street-style dance, and it’s so cool to see fresh talent, it’s so raw and real. Being around our tour dancers has been a privilege; they have opened my eyes to the craft of dance.

And so I close on this note… what I have learnt is that I can never say never. If you’d asked me ten years ago if I would have been at Madison Square Garden with the Spice Girls, I would have said no. But look what has happened, and that is my lesson. Job done.

Big hug and night night. I’m going out dancing now with Emma and the rest of the gang.

END_OF_DOCUMENT_TOKEN_TO_BE_REPLACED

Spice Girls stars Melanie Chisholm, Emma Bunton, and Victoria Beckham spoke backstage to the Sydney Morning Herald about their decision to cancel the Australian leg of their comeback tour before their performance at Madison Square Garden the other evening. “We were really excited about that part of the tour,” Chisholm said. “We had never toured Australia before. We literally ran out of time and we know that probably isn’t good enough.” Bunton cited US and UK demand for tickets. “It was huge in the UK and the US,” she said. “You know we love you lots.” And Posh added that children was another big factor. “We’re mothers,” she said. “That’s our priority at the end of the day.” 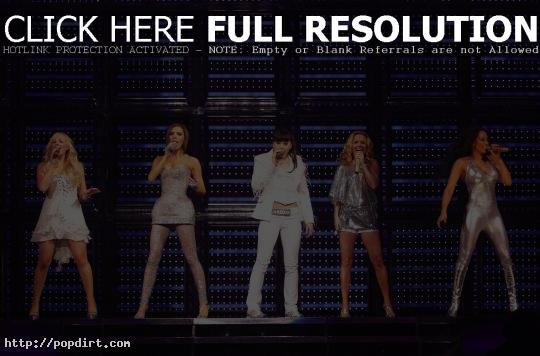 Rav Singh of News of the World claims that video the Spice Girls posted announcing that their reunion tour would be wrapping up at the end of the month was hampered by constant bickering, requiring the British pop group to do seven takes before coming up with something they were happy with. “The YouTube video was a total PR stunt to play down the fact they’re still fighting,” a source said. “They were at each other’s throats before and during the recording of the video—it took seven goes to get it right.” The arguing took its toll on Emma Bunton, who the insider added was “very teary because she’s so disappointed their revived friendship is falling to pieces.”