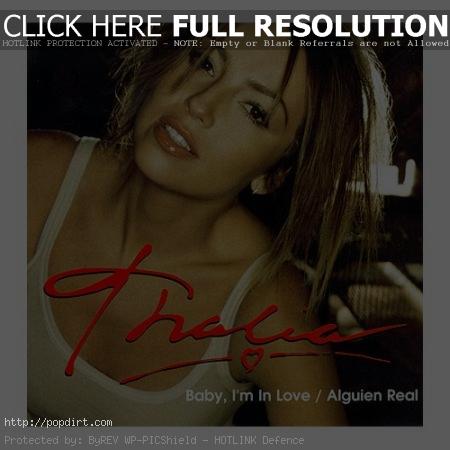 Watch Latin goddess Thalia’s heat up the screen in her sexy new video ‘Baby I’m In Love’ below the fold courtesy Yahoo! Music.

Thalia Will Perform At The NBA Premiere Week

The NBA will open the 2003-04 season with four straight nights of nationally televised doubleheaders and a special performance by Latin sensation Thalia.
END_OF_DOCUMENT_TOKEN_TO_BE_REPLACED

Michael Paoletta of Billboard caught up with Gloria Estefan and asked the singer if there was anything she’s learned during her long career that she wished she’d known from day one.

“I was shy. It took me a long time to relax,” Estefan said. “There were a lot of performances and situations that I could’ve enjoyed if I had just been able to let go. But that is impossible, because it comes with time and experience. But I try to impart this to artists like Shakira and Thalia, so that they can get a jump-start on what it took me a long time to figure out: that we’re privileged and lucky to be making a living from something that is so much fun.”

Star magazine’s Victoria Gotti caught up with Thalia to quiz her about her new K-Mart sportswear line at the kick off party in New York City on August 13th. “My favorite pieces in the line are definitely the jeans,” Thalia said. “I designed them to be sexy, dressy and classy. Women feel incredibly sexy in my jeans.” The new collection goes on sale at select K-Mart stores this fall.

Thalia Amazed By Her Happy Marriage To Mottola

Thalia tells Victoria Gotti of Star magazine that she can’t believe how happy she is in her 2 1/2 year marriage to music mogul Tommy Mottola. “We respect each other and spend most of our time together,” she said. “I predict Tommy and I will grow old together. I can see us years from now in rocking chairs on the front porch.”

August 22, 2003 – Thalia tells Ramiro Burr of the San Antonio Express-News working with Fat Joe on her self titled album’s debut single ‘I Want You’ was a memorable experience. “It was incredible. Working with a Latino born in the United States, it’s a completely different culture,” she said. “It’s a new Latino culture. Working with him was sensational. There was a clash of cultures, even though we’re from the same race. And it was very interesting how he wrote the rap in 15 minutes. And he sings his rap, but this song is more R&B. I’d written a rap song, ‘Arrasando,’ so I’ve already sung a little of many genres. This album has a little of everything.”

Thalia once again took a swipe at her husband Tommy Mottola’s ex-wife Mariah Carey during an interview with Blink 102.7’s Lizzie Grubman on Monday. “Tommy and I met in a different situation,” Thalia said. “He was already famous in his own world. I was already famous in my own world. I didn’t arrive with a tape in my hand saying, ‘Like, could you make a career for me or could you sign me?'”

Today I went to Bryant Park to see Thalia perform on Good morning America. First I feel the need to let everyone know that I happen to like her (sometimes, though) I own several of her CDs, and unfortunately that’s they only place where she actually sounds decent, in her CDs. I caught 4 of her performances today and I feel sad to say that I was very disappointed at them, her voice was not great, now I understand why she has never done big tours, and that’s because she can’t hold a concert for 2 hours. Her voice got lost in the music, which by the way was a recording, she was singing over it, didn’t have background singers and most of the instruments were not live.
END_OF_DOCUMENT_TOKEN_TO_BE_REPLACED

WireImage has photos of Thalia at her Kmart Thalia Sodi Collection launch on Wednesday (August 6) at the Kmart Store in Miami, Florida. Check out the pictures more.

Thalia spoke with Entertainment Weekly and defended her marriage to music mogul Tommy Mottola, insisting she didn’t marry him to increase her profile in music. “I didn’t come up to him with a tape in my hand like, ‘Could you make me famous?’,” Thalia remarked, an obvious slight towards Mottola’s ex-wife Mariah Carey. “I was already somebody. I had a great relationship with my record company and an amazing contract. I never saw him with another agenda. I was in love.”