Thalia Gives Fans Something Worth Waiting For

Ramiro Burr of the San Antonio Express-News caught up with the more than 500 fans in San Antonio on Tuesday afternoon at the far East Side Wal-Mart superstore for a chance to meet Mexican pop singer Thalia who was signing copies of her new self-titled English debut. Meanwhile, Thalia herself said of the new album: “We achieved a very special sound with great quality and lots of fusions of elements. It (the CD) has pop, R&B, and a little rock. It’s my 10th album. Ten, for me, represents the chance to begin another cycle.”

The entire article at mysanantonio.com has since been removed. 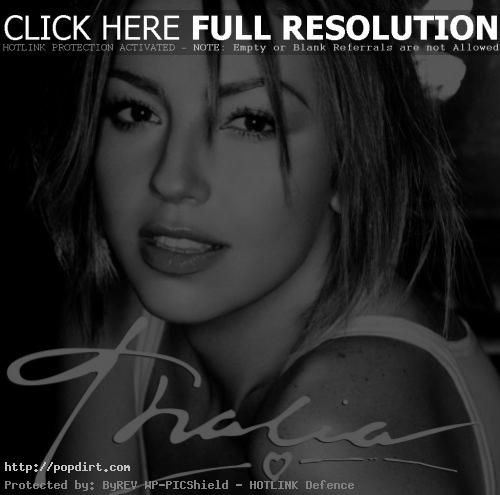 From an independent Thalia website: “Thalia, singer of such hits as ‘No Me Ensenaste’ and ‘A Quien Le Importa?’ is planning a crossover, and judging by her R&B/hip-hop first single ‘I Want You’ f/ Fat Joe, it’s going to be interesting. According to a South American newspaper, Thalia’s new song titled in English ‘I Won’t Object (To Your Lovin’ or in Spanish ‘No Me Voy A Pedir (Para Sexo)’ steals a blend of beats from Colombian Shakira’s hits ‘Suerte’ and ‘Te Aviso, Te Anuncio’ from her worldwide smash album ‘Servicio de Lavanderia.’ Shakira reportedly wrote a letter to Thalia asking her to change the song, but at press time, Thalia, nor her label, responded to Shakira’s note. Rumors of Thalia copying Shakira’s crossover and her musical technique are spreading across South America and slowly creeping towards the United States. The facts that Thalia dyed her hair blond and has allegedly been taking belly dancing classes at a private club in New York only add fuel to the fire. Thalia, husband Tommy Motolla, or her management could not be reached for comment, but according to a source close to Shakira, she is “very distraught about the whole thing.””

July To Be Thalia’s Month

May 6, 2003 – Thalia’s official website reports that July will be a sensational month for Thalia, a month that tentatively marks two great launches: the launch in the United States of her first English album and the launch of her K-Mart line, an amazing collection of clothing for women and juniors, shoes, accessories, underwear, items for the home and back-to-school.

Mexican singer/actress Thalia’s new single, entitled ‘I Want You,’ from her much-anticipated English crossover debut CD will hit Rhythm crossover stations on April 29, as well as the Top 40 stations on May 13 in the United States. ‘I Want You’ was produced by Corey Rooney (Jennifer Lopez, Marc Anthony, Destiny’s Child). It is an upbeat track which blends pop and hip hop, and features the Terror Squad’s Fat Joe. The video for the single will be filmed in New York City next week.

Thalia Participates In ‘Principal For A Day’

April 6, 2003 – Mexican singer/actress Thalia participated in Pencil’s ninth annual ‘Principal for a Day’ in New York City. Along with 1,258 other New Yorkers, including business people, entertainers, athletes and politicians, the singer joined principals, teachers and students at NYC public schools. New York City public schools are at a critical juncture in school reform and need the support of the private sector. Principal for a Day offers an entry point for continued year-long involvement. Thalia has continually used her efforts to help kids continue their education. The singer, who lives in NY, has followed the success of Pencil’s Principal for A Day and was thrilled she was finally able to be a part of it. Thalia has recently finished recording her first English album which will be in stores in June. Her remix album, Thalia Hits Remixed, is currently no. 3 on Billboard’s Hot Latin chart.

March 30, 2003 – The highly anticipated English album of Mexican singer/actress Thalia is about to dominate the airwaves in the United States and the world. Virgin is turning up the heat with the launch of their beloved artist. Thalia has surrounded herself with the best producers and the most respected names in the industry like Corey Rooney (Jennifer Lopez, Marc Anthony, Destiny’s Child), who will produce Thalia’s first single which will hit the streets in the upcoming months. The track features Thalia singing with one of the Terror Squad’s own. For this CD, Thalia also worked with Steve Morales, the great talent and mastermind behind hits by Christina Aguilera (‘Beautiful’) and Enrique Iglesias (‘Escape.’)

Mexican singer Thalia was seen with Robbie Williams engaging in what seems to be a spirited conversation about music during the Virgin Records after-Grammy party. Thalia also rubbed elbows with old friend Kelly Osbourne.

March 5, 2003 – Radio 1 reports that at Robbie Williams’ press conference in Tokyo earlier this week, he admitted that his ticking biological clock is making him broody. “I’m reaching 30 now and I’ve been having a look at myself for quite some time,” he said. “It’s really important for me that I don’t pass whatever I’ve got on to my children – and I really want children.”

Official Says One Of Thalia’s Sisters Has Been Released

Mexico City’s attorney general Bernardo Batiz said Friday that Thalia’s sister Laura Zapata has been released after kidnappers held her for 18 days. According to the authorities, the whereabouts of Thalia’s other sister, Ernestina Sodi, who was kidnapped along with Zapata on September 22, is still not known.

Globe magazine reports Mariah Carey has been fretting to pals that the two sisters kidnapped by Tommy Mottola’s wife Thalia could have been her or her family. A pal confided, “Mariah says it makes her blood run cold to know that she or her family could easily have been targetted by kidnappers during the years she was married to Tommy. She always thought he was being paranoid and macho by having a lot of armed guards around. She’s now saying Tommy was right to have been so protective of her, but most of all, Mariah wants a happy ending for him, Thalia and her sisters.”

Univision is asking which Latin artist pioneered the bleach-blonde look music, with the color adorning Por Monica Prieto, Shakira, Thalia, Christina Aguilera, and Paulina Rubio. As for Shakira’s blonde locks, they report Emilio Estefan, the producer of his previous disc, raised the roof because the Colombian singer had changed the image without consulting him.

Note: The link has since expired.